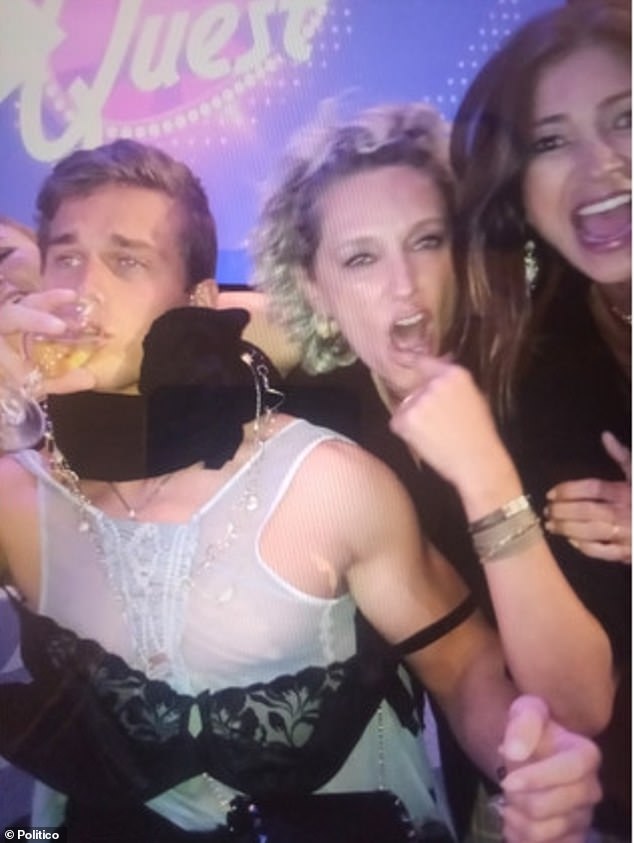 The photos obtained by Politico how the 26-year-old Republican with a vacant look in his eyes, wearing women’s hoop earrings and a woman’s necklace along with a bra and lingerie set.

Screenshots of the photos were provided to the outlet by someone who used to be close to Cawthorn and his campaign. A second former confidante of Cawthorn verified the photos. It’s unclear when they were taken, but he appears to be sitting in his wheelchair, indicating they were taken after the car accident that left him paralyzed in 2014.

Cawthorn brushed off the photos on Twitter Friday evening, and claimed it was all part of a cruise ship game and was another attack from the left.

‘I guess the left thinks goofy vacation photos during a game on a cruise (taken waaay before I ran for Congress) is going to somehow hurt me? They’re running out of things to throw at me…’ he wrote on Twitter.

Cawthorn shared a link describing the Royal Caribbean Quest Game Show. ‘What Royal Caribbean event has you sharing your underwear, putting lipstick on strangers and screaming at the top of your lungs? It’s the Quest game show, the adults-only scavenger hunt that ranks as a cruise can’t-miss,’ CruiseCritic.com says of the game.

The North Carolina Republican, the youngest member of Congress to date, built a persona based on conservative Christian principles and masculinity. He was also made the headlines recently for his orgie claims, claiming Nancy Pelosi has a ‘drinking problem’ and calling Ukrainian President Volodymyr Zelenskyy a thug.

He has also been pulled over twice cops in North Carolina in recent months for driving without a valid license.

Despite criticism from his Republican colleagues in Congress, former President Trump maintained his support, inviting Cawthorn to rally with him in Selma, North Carolina on April 9.

In December 2021, Cawthorn announced that he and his CrossFit athlete wife Cristina Bayardelle were getting a divorce after just eight months married.

‘Madison is amazing – we’ve had an incredible journey together. Our marriage, like every marriage, has had its difficulties. The lifestyle shift into public life has been strenuous, and many aspects of the transition have been unexpected,’ she said of their divorce in December.

Earlier this month, Cawthorn asserted that real women had ‘XX chromosomes’ and ‘no tallywacker.’

‘There’s only one God and two genders,’ he wrote in a tweet earlier this week.

‘I think that we have bred a generation of soft men and that generation has created a lot of problems in our society and our culture,’ Cawthorn said in a March 2021 podcast.

Cawthorn brushed off the photos on Twitter Friday evening, and claimed it was all part of a cruise ship game and was another attack from the left.

Faced with seven primary challengers, Cawthorn recently declared that he is ‘not going anywhere’ after Republicans turned on him when the congressman decried on a podcast the ‘sexual perversion’ and drug use that goes on in Washington, insinuating members of his own party were implicated.

‘The sexual perversion that goes on in Washington … being kind of a young guy in Washington where the average age is probably 60 or 70, I look at all these people – a lot of them who I’ve looked up to throughout my life … then all of a sudden you get invited to like, ‘well hey we’re going to have kind of a sexual get together at one of our homes. You should come,’ like, what did you just ask me to come to?

‘There’s some of the people that are leading the movement to try and remove addiction in our country and then you watch them doing, you know, a key bump of cocaine in front of you and it’s like wow, this is wild.’

Fellow Republicans complained in a closed meeting he was soiling their reputation with the wild, non-specific claims and House GOP Leader Kevin McCarthy said Cawthorn had ‘lost my trust’ and gave him a stern talking-to in his office.

Before that, he came under fire for accusing House Speaker Nancy Pelosi of being an alcoholic, although she is a tee-totaler, and called Ukrainian leader Volodymyr Zelensky a ‘thug.’

The 26-year-old congressman was asked to turn over his license last month and switch seats with a woman who had been in the passenger seat of his pickup truck, a two-minute thirty-two-second video shared by the Charlotte Observer shows.

In March, Cawthorn was charged with driving on a revoked license for the second time since 2017.