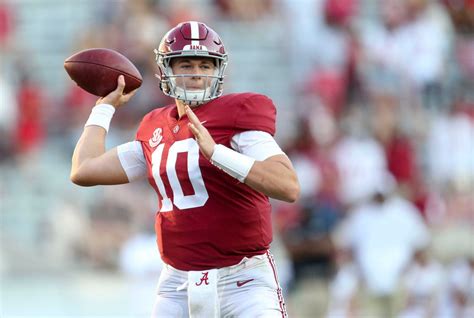 Mac Jones, the Patriots’ quarterback, seemed to lose his cool during a 24-10 loss to the Buffalo Bills on Thursday night in Foxborough, Massachusetts.

During the Prime Video broadcast, Jones was seen swearing and criticizing the Patriots’ play-calling on camera.

A disgruntled Jones seems to yell, “Throw the f—ing ball!” “The fast game is terrible!”

After the game, Jones spoke to the media and expressed sorrow for allowing his annoyance get the better of him. He wanted the Patriots to throw the ball further down the field.

After the Patriots’ loss, which dropped them to 6-6 and put them three games behind the Bills in the AFC East standings, he remarked, “Obviously, I just kind of let my emotions get to me.” “What I suggested was that you should toss it farther in the short game. I need to do that aspect more effectively. However, we kept returning to the short game, which is effective. But I thought we needed chunk plays. To kind of jolt everyone into action, I yelled it out. This is emotional. Football is that. This game is really important to me.

“It goes without saying that you shouldn’t allow your emotions rule your actions. That’s pretty much all, in my opinion. There was no one it was intended for. There is nothing except feeling. We kind of needed a spark.

Despite his displeasure with the way things were developing, Jones said he was still on the same page with Matt Patricia, who calls in the plays to him.

The message simply said, “Let’s go for it, let’s be aggressive, let’s take those shots. Just battle through it,’ Matty P was saying, according to Jones. We carried it a little bit farther and sort of did it there at the end.