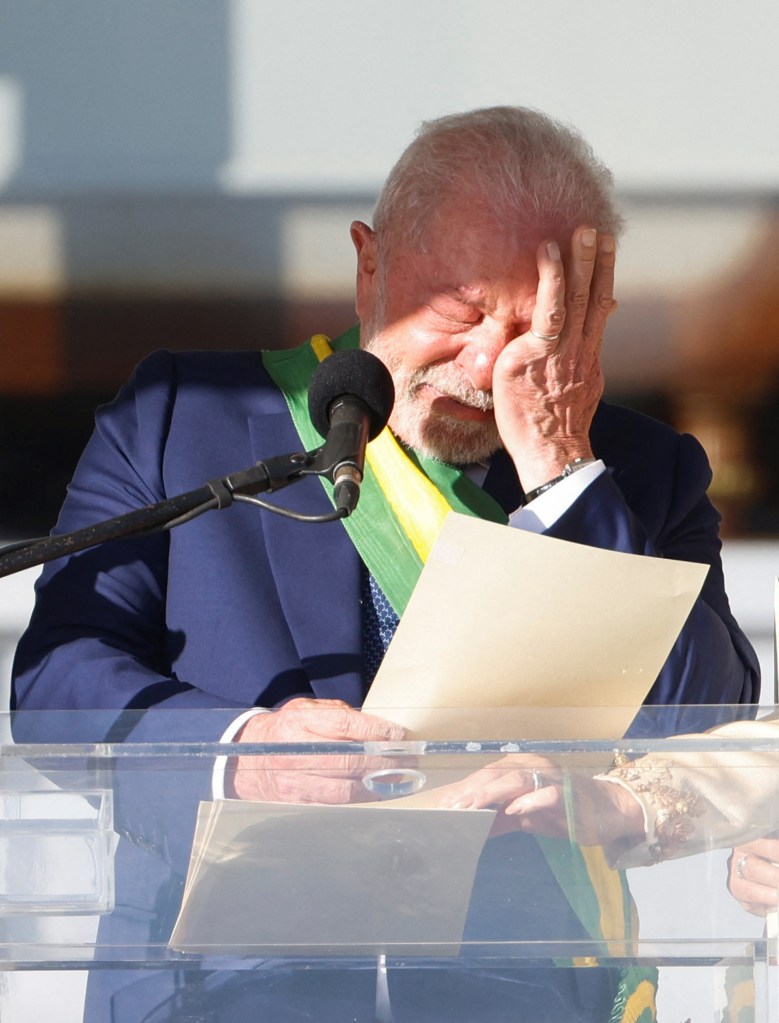 Luiz Inacio Lula da Silva was sworn in as the president of Brazil on Sunday, delivering a scathing indictment of previous far-right leader Jair Bolsonaro and pledging a radical course correction to rescue a nation beset by hunger, poverty, and racism.

In a speech to Congress after formally assuming control of Latin America’s largest nation, the leftist declared that democracy was the genuine victor of the October presidential race, in which he defeated Bolsonaro in the most contentious contest in a generation.

Bolsonaro, who departed Brazil for the United States on Friday after refusing to acknowledge loss, rattled the cages of Brazil’s young democracy with unfounded accusations of electoral flaws that gave rise to a violent movement of election deniers.

“Democracy was the clear winner in this election, triumphing against… the most violent threats to the right to vote and the most squalid campaign of falsehoods and hatred designed to deceive and humiliate the voters,” Lula told lawmakers.

Lula, who was incarcerated during Bolsonaro’s 2019 inauguration due to subsequently reversed corruption convictions, issued a veiled threat against his predecessor.

Lula stated, without addressing Bolsonaro by name, “We do not harbor a spirit of vengeance against those who attempted to subjugate the nation to their personal and ideological goals, but we will ensure the rule of law.” Those who erred will be held accountable for their errors.

In addition, he accused Bolsonaro’s administration of “genocide” for failing to adequately respond to the COVID-19 virus, which killed over 680,000 Brazilians.

As he received the presidential sash, Lula brushed away his tears.
Reuters

“The perpetrators of this crime must be probed and held accountable,” he stated.

Bolsonaro’s journey to Florida shields him from immediate legal peril in Brazil; nevertheless, after losing his presidential protection, he faces rising judicial dangers due to his anti-democratic statements and epidemic response, according to legal experts.

Bolsonaro’s four years in office were marked by a rollback of environmental protections in the Amazon rainforest, looser gun regulations, and weakened rights for indigenous and minority populations.

Lula stated that he intends to transform Brazil, one of the world’s leading producers of food, into a green superpower.

Lula restored the authority of the government’s environmental protection agency Ibama to battle illegal deforestation, which had been weakened by Bolsonaro, and overturned a legislation that encouraged illegal mining on indigenous territories that are protected.

On his trip to the Planalto palace, Lula was accompanied by his wife, Vice President Geraldo Alckmin, and Alckmin’s wife.
Reuters

In addition, he defroze the billion-dollar Amazon fund supported by Norway and Germany to support sustainability initiatives, reaffirming his commitment to halting deforestation in the Amazon, which reached a 15-year high under Bolsonaro.

The administration of US President Joe Biden, who had nothing in common with Bolsonaro and disapproved of his poor environmental initiatives, wished success to Lula and his vice president, Geraldo Alckmin.

US Secretary of State Antony Blinken tweeted, “We look forward to continuing the strong US-Brazil collaboration in trade, security, sustainability, innovation, and inclusiveness.” “Here’s to a prosperous future for our nations – and the entire planet!”

In a letter congratulating Lula on his return to government, King Charles of England promised to increase cooperation with Brazil, particularly on environmental issues.

Tens of thousands of supporters gathered to witness the inauguration of Lula.
Reuters

“I was heartened to hear you stress the urgency of addressing the climate catastrophe in your victory speech and at COP27,” the king said in a letter made public by the British embassy.

After the inauguration, Lula rode in an open-top Rolls-Royce to the Planalto palace, where he ascended the castle’s ramp with his wife and a varied company that included the chief of the Kayapó tribe, a young Black child, a cook, and a crippled man.

Aline Sousa, a Black garbage collector, then presented Lula with the presidential sash, a highly significant rite in Brazil that Bolsonaro had frequently stated he would never perform.

Tens of thousands of people who had gathered to celebrate on the esplanade of Brasilia applauded as Lula brushed away tears.

In a following speech, he vowed to unify the fractured nation and rule for the benefit of all Brazilians.

Lula stated, “There are not two Brazils.” We are one nation, a wonderful nation.

In October, during a tense election, Lula was elected president.
Reuters

He stated, “This will be the trademark of our government.”

Reuters reported on Sunday that allies suggested Lula’s newfound social consciousness was the product of his 580 days in prison.

In his first decrees, Lula rescinded Bolsonaro’s more permissive gun policies, which had led to a significant increase in gun ownership.

“Brazil wants peace and security for its people, not more armaments,” he stated.

The inauguration of Lula took place amid increased security.

Some of Bolsonaro’s supporters have asserted that the election was stolen and have called for a military coup to prevent Lula from coming to office in a climate of violence and vandalism.

On Christmas Eve, a Bolsonaro fan was apprehended for constructing a bomb that was discovered on a vehicle carrying aviation fuel at the entrance to Brasilia airport, and he confessed he intended to trigger a military intervention.

Bolsonaro has lost the backing of many erstwhile friends as a result of the anti-democratic demonstrations.

“Leaders who were expected to soothe and unite the nation…allowed quiet or untimely and destructive protagonism to create an atmosphere of turmoil and societal disintegration,” stated Mourao.

Lula’s election victory was a dramatic political comeback, granting him an unprecedented third term after a one-year absence spent in prison.

During his two previous stints as president, from 2003 to 2010, the former union leader brought millions of Brazilians out of poverty during a commodity boom that bolstered the economy.

Now, he has the formidable job of reviving Brazil’s sluggish economy and unifying a fractured nation.

Creomar de Souza, the director of Dharma Political Risk in Brasilia, stated, “Lula is held to high expectations.” He will be tasked with restoring normalcy and predictability in Brazil and, above all, delivering swift results that improve the quality of life for its citizens.