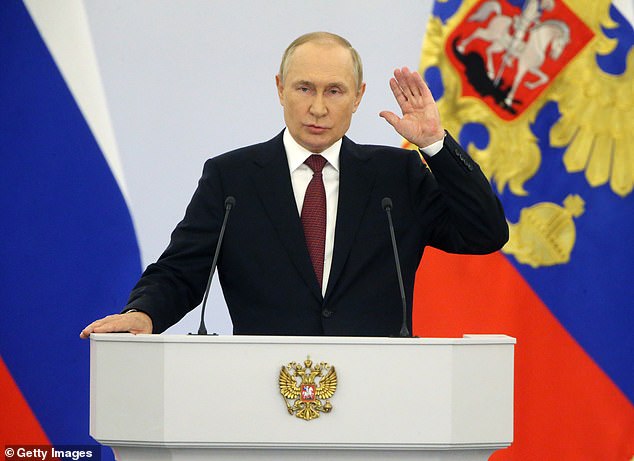 Admiral Lord West said that nuclear weapons are an essential line of defense against hostile threats on the occasion of the 70th anniversary of the UK’s first atomic bomb test.

Can you imagine if Putin had nuclear weapons and the West didn’t? said Lord West, who was in the Navy for 42 years and served as First Sea Lord and Chief of the Naval Staff from 2002 to 2006.

Let’s face it, he would use them without hesitation. This is the ultimate defense for our national security against nuclear-armed powers, as has been emphasized regarding our deterrence.

In 1952, off the coast of Australia’s Montebello Islands, the HMS Plymouth, which was carrying Britain’s first atomic weapon, was blown up. Its 25 kiloton force was greater than the bombs the US detonated on the Japanese cities of Hiroshima and Nagasaki in 1945.

In reaction to assaults on regions of Ukraine he has seized, the Russian president has promised to use “all the measures at our disposal” to defend his nation. This is seen as a threat to deploy tactical nuclear weapons.

However, Defence Secretary Ben Wallace downplayed the possibility, saying that while the use of nuclear weapons was part of Russian military doctrine, it would be unacceptable to Moscow’s allies India and China. Wallace was speaking at a fringe gathering at the Tory party conference.

In his testimony, he said that during talks with the presidents of China and India, Putin “was given a very clear idea of what is acceptable and unacceptable.”

Mr. Wallace said, however, that the Russian president’s actions—from the Salisbury nerve agent assault to the invasion of Ukraine—were “absolutely insane.”

Ramzan Kadyrov’s demand for Moscow to deploy low-yield nuclear weapons in Ukraine would be “a very high-consequence move,” according to security minister Tom Tugendhat.

He said at a different conference fringe event: “It is quite evident that nuclear weapons have been an enormous taboo for practically every nation in the globe for decades now, and changing that would be a catastrophe for all of us.”

When asked whether Mr. Putin would eventually be welcomed back into the international community, Mr. Tugendhat said, “I’d be amazed.” Never say never, but President Putin has outlined a plan and a course of action that rule out discussion.

The Russian president, he claimed, would have to “end his campaign of killings across Europe” and acknowledge the territorial integrity of Ukraine.

Mr. Wallace will attend a crisis conference of northern European countries on Monday to talk about the security of pipelines and underwater cables as a symbol of the most recent worries about Russia’s activities.

A series of explosions that seriously damaged Russia’s underwater Nord Stream gas pipelines, according to Prime Minister Liz Truss, were “obviously an act of sabotage.”

Mr. Wallace said that the Nordic countries and the UK were “seriously susceptible” to attacks on cables and pipelines.

On Monday, I’ll be calling a virtual joint expeditionary force meeting with the Dutch, he said.

The Nordic nations and ourselves are very exposed to individuals doing stuff on our cables and our pipelines, therefore I must break my schedule tomorrow to meet with 10 of the Nordic states about what we’re going to do about it.

“Sooner or later, it becomes a significant problem we have to explore, and we have to consider what resources we can move to reassure people or, in fact, investigate what’s happening.”

As he acknowledged some supplies were running “pretty short,” Mr. Wallace said the extended conflict in Ukraine had shown the need to ensure that inventories of equipment and supply routes were safeguarded.

The “unsexy aspects” of the budget had been overlooked because defense expenditure had been “hollowed out” during the last 30 to 40 years, he said.

It was stated by Mr. Wallace that “some of our weapons stocks are very low and the supply networks shut off ten years ago, so we have to renew that.” He said that one of the reasons why the Russians were suffering so much was because some of their suppliers were in Ukraine and had been attacked. He called this evidence of President Putin’s “strategic brilliance.”

James Cleverly said at a different fringe event that Ukraine would be successful in driving away Russian invaders because Moscow’s “tanks are afraid of Ukrainian tractors.”

The foreign secretary stated: “We have witnessed Ukrainians defend their nation against this illegitimate, unprovoked act of aggression by Vladimir Putin, including both their professional army and those individuals volunteering, those citizens, students, singers, politicians, artists, and sports stars.

“Anyone here who served in the military knows that a tank’s sole enemy is another tank,” someone said. Well, Ukrainian tractors terrify Russian tanks.

“That’s why Ukrainians will triumph, and when they do and that wonderful, magnificent day arrives, then our role develops, because we have to assist them rebuild their nation, their society, and their economy.”

The ambassador of Ukraine to the UK criticized the visa application procedure while claiming to be “fascinated” by British bureaucracy.

Vadym Prystaiko thanked Britons at a side event at the conference hosted by the Conservative Friends of Ukraine group for welcoming Ukrainians fleeing the conflict into their homes.

The six-month contract under the government’s sponsorship program is about to expire, so Mr. Prystaiko pleaded with those housing refugees for “more hospitality, more generosity, and more patience.”

We won’t ever forget this kindness, he declared. And if possible, someone should finally take action on the visas. James Cleverly, the (foreign) secretary, is missing. You know, I simply have to tell you that this is a shame. I find your bureaucracy fascinating.

He has previously lobbied MPs to remove visa rules for Ukrainians leaving the country and said his wife had trouble getting one.

In the meanwhile, Boris Johnson was announced as the organization’s new president, Conservative Friends of Ukraine.