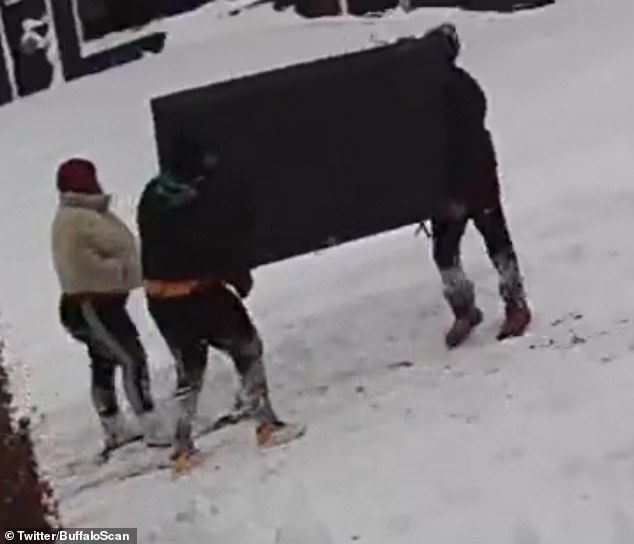 In the midst of a historic blizzard that piled six feet of snow on the northern New York metropolis, looters have wreaked havoc on stores, plunging Buffalo into anarchy.

It is the deadliest storm to strike the western section of the state in the past 50 years, with at least 35 people reported dead and dozens still trapped in their homes and vehicles.

After several days, the city’s roads are still impassable due to many feet of snow, and first responders are still battling to reach individuals who are cut off.

Erie County Executive Marc Poloncarz stated at a Monday morning news conference that shelters and nursing homes are beginning to run out of food, while fewer than 10,000 people remain without power ahead of a second storm that is expected to dump another foot and a half of snow on an already struggling city.

In Buffalo, New York, a trio of bold criminals were captured on camera stealing a television from an abandoned storefront during a severe snowfall.

Kathy Hochul, the governor of New York, has now proclaimed a state of emergency and requested federal aid as the state’s citizens become increasingly desperate.

Online videos depict bold burglars taking advantage of the commotion by traversing snowdrifts to enter abandoned businesses, such as a Dollar General where shelves were destroyed and merchandise was spread on the ground.

Residents filmed some of the criminals as they stole paper towels and toilet paper from the business, and one woman posted a Facebook Live video of herself and her accomplices stealing merchandise from the store.

Others were captured removing televisions, while one man was captured on surveillance camera shattering the glass of a liquor store entrance and allegedly stealing $500 worth of merchandise.

The owner of the store told WKBW reporter Michael Schwartz that he had to spend the night in the store since he was unable to board up the hole due to the storm.

The thief, he noted, has “cheap and poor taste.”

Andre Brown noted that the culprits were not stealing food or medication, as depicted in online images of a disorganized Fasttrac convenience shop.

Therefore, these individuals are not in need; rather, they are taking advantage of a natural disaster and the suffering of many in our community to steal from retailers.

One bold robber even streamed herself on Facebook Live as she and a companion robbed a dollar store where shelves are overturned and merchandise is strewn about the floor.

Andre Brown noted that the culprits were not stealing food or medication, as depicted in online images of a disorganized Fasttrac convenience shop.

County Executive Poloncarz stated on Monday that officials are investigating accusations of rampant looting in the city.

At a news conference, he declared, “I’m heartbroken by the deaths, I’m truly devastated to see so many dead.” The fact that looting is occurring in our town at the same time as we are still recovering bodies is horrifying.

Some social media users said vigilantes opened fire on the criminals after observing police capturing some of the crooks outside the dollar shop as they loaded their trunk with stolen goods.

Police Commissioner Joseph Gramaglia stated on Monday that officers had reacted to many reports.

We’ve made a few arrests and intervened in a few of them. We have helped at least one site board up a store, as far as I am aware,’ he continued.

Daniel Neaverth Jr., the state’s commissioner of Homeland Security and Emergency Services, stated that more than a dozen gas stations in Erie County are currently inoperable because their convenience areas have been ransacked and their equipment has been rendered ineffective, rendering the fueling pumps inoperable.

‘Therefore, if you don’t believe that looting and taking individual items has a trickle-down effect, there is a severe issue for us, as we must now find alternative fuel sources’ for emergency vehicles.

Hundreds of vehicles, including several tractor-trailers and buses, were abandoned on the roads after they were unable to traverse the snowdrifts.

Monday view of downtown Buffalo, three days after the storm devastated the city.

During the hurricane, there were also reports of price gouging.

At the Monday press conference, Governor Kathy Hochul reaffirmed that “price gouging is prohibited” and that the state will “go after them.”

She stated, “We have the office of the attorney general, and our state is prepared to investigate any charges of price gouging.”

‘Those who engage in this vile activity at a time when people in our community are suffering, when they’re unable to obtain basic essentials because stores have been closed since Friday, should be ashamed of themselves,’ the speaker said.

On a route in Buffalo, trucks were stranded in the snow as a result of the record storm. Officials claim that looters damaged equipment at gas stations and impeded rescue efforts.

After failing to wade through the feet of snow, hundreds of vehicles, including several tractor trailers and buses, were left abandoned on the streets.

The prohibition on driving is now in effect, and Poloncarz announced on Monday that the police will begin issuing summonses to “joyriders” caught driving in violation of the law.

Gov. Kathy Hochul stated that hundreds of individuals have been rescued from their automobiles, but added, ‘We still have folks that need to be saved.’

Monday, she spoke with Vice President Joe Biden about prospective federal aid for the beleaguered city, tweeting, “We are incredibly appreciative for the federal government’s support as we assist Western New York in its recovery from this historic snowfall.”

Later, the Biden administration issued a statement indicating that he had promised the governor the “whole might of the federal government” to assist the people of New York as the state deals with the effects of a historic winter storm.

The President has instructed his administration to respond swiftly to any requests for federal aid made by the Governor.

Gov Kathy Hochul revealed in a tweet that she had discussed potential federal aid with President Joe Biden.

She called in the National Guard to assist local authorities in dealing with the storm, which dumped so much snow on Buffalo that the Fire Department was unable to respond to calls.

Due to the storm’s heavy snowfall, the Buffalo Fire Department was unable to respond to any calls.

A man walks his dog through snow-covered streets as people prepare for additional snowfall.

Several residents, including these two, were also involved in the community.

As snow poured on the city on Friday, peak wind gusts reached up to 79 mph, while the North County, Finger Lakes, and Central New York regions all had gusts of 60 mph.

The National Weather Service continues to issue a winter storm warning for the area and warns that the city might once again experience lake effect snow, which occurs when cold air flows over warmer lake waters and forms a freezing spray.

She added during a Monday news conference, “We continue to work around the clock with local leaders to respond to this historic storm and are in communication with the White House to secure crucial federal assistance to help our communities rebuild.”

I urge everyone to continue to look out for one another, stay off the highways, and take safety precautions at home.

This is for your own safety and to make it easier for utility employees, snowplows, and emergency services to operate.

Our state agency teams have been collaborating with each other and with our local partners to help New Yorkers weather this historic storm.

»Looters wreak havoc in Buffalo, bringing the death toll to at least 35«