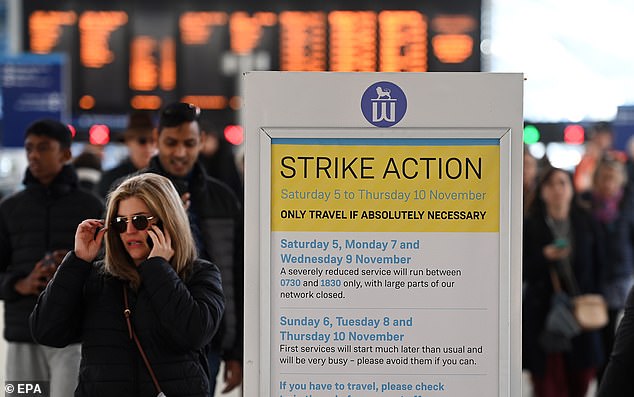 The RMT union has announced that the London Underground strike will proceed on Thursday after unsuccessful negotiations to resolve a salary issue.

Commuters encountered additional rail turmoil today, as a scarcity of drivers compelled train companies to operate a restricted service despite the fact that strikes ended four days ago.

Multiple lines were operating on a reduced timetable this morning due to the sudden change, leaving customers upset as they once again faced a difficult commute to work.

This week’s travel woes will continue on Thursday, when 10,000 RMT members from the London Underground and Overground services will strike.

The RMT union has announced that the London Underground strike will proceed on Thursday after unsuccessful negotiations to resolve a salary issue. (Pictured: a sign advising travellers to only travel if absolutely required)

Today, Just Stop Oil avoided police in order to climb onto another highway gantry, despite picking the same time and technique for their demonstration.

Desperate to get to work, frustrated motorists ignored intelligent highway markings and drove in closed lanes.

The eco-extremists, whose activities are publicly publicized, want to end the issuance of new gas and oil licenses.

This morning, Essex Police issued the following statement: ‘We are currently on scene at the northbound track of the M25 at the Dartford River Crossing, where a protestor has climbed onto the gantry at junction 31.

Two lanes and the Dartford Tunnel are closed. We are doing everything possible to keep you going.

“Police officers are on the scene. Please avoid the area and, if feasible, seek an alternate route. We will keep you informed as soon as possible.

After the demonstrator had climbed the gantry, the Surrey Police also sprang into action.

This morning, protestors climbed onto motorway gantries between junctions J8-9 and J12-13 along the M25, according to a tweet from the police.

Brits vented their anger at the ‘total carnage’ on social media, dubbing train operators ‘disgusting’ since trains were overcrowded and several were cancelled.

It comes after protestors from Just Stop Oil scaled gantries on the M25 for the second day in a row, leading in the closure of at least four junctions including the Dartford Tunnel.

Southwestern Railway was one of the affected train lines on Tuesday, as it advised that first trains would begin “much later than usual” and were “expected to be highly crowded.”

It advised commuters to avoid traveling before 8 a.m., but stated that it anticipated a fully operational service later in the day and throughout Wednesday.

Southern Rail, Great Northern, Thameslink, and Chiltern Railways all announced that their services will begin later than usual, and advised passengers to check before traveling.

In the meanwhile, there was no Gatwick Express service before 7 a.m., and Avanti West Coast said that its schedule will be “seriously reduced” from 5 to 10 November.

“Train schedules are rigorously prepared to ensure safety, must be coordinated nationwide by Network Rail, and are finalized one week in advance.

We apologize for the continuous interruption during this extended period of industrial action and are working diligently to get as many trains operating as usual.

Even when services arrived today, there were significantly fewer carriages than usual, and one commuter compared it to being “caged like animals.”

One enraged client referred to Great Western Railway as a “shower of s***e,” adding in a tweet, “Reduced numbers of trains, so to compound the agony, you replace trains that should have ten cars with only five to produce scenes like this.”

“It’s no surprise that the hardworking British populace has no sympathy for you.”

This week, members of the Rail, Maritime, and Transport union (RMT) are engaging in lengthy walkouts over jobs, pay, and working conditions.

RMT called off the strikes on Friday, citing “unconditional” negotiations with Network Rail (NR) and the prospect of a compensation offer from train operating companies.

However, they were reinstated following the failure of negotiations to resolve the disagreement.