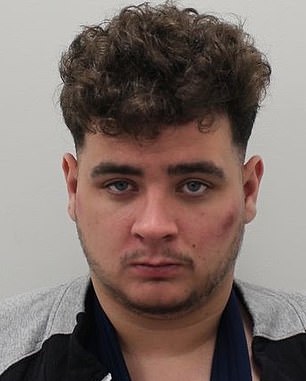 During a harrowing street robbery, two Rolex thieves used a shock gun to steal a £100,000 watch from a group of American visitors. Both of the thieves were incarcerated.

Thomas Lenaghan, 24, and Ronnie Fitzgerald, 20, zapped their victim with a stun gun before fleeing in a stolen vehicle.

The gruesome incident occurred in London’s affluent Chelsea neighborhood shortly after midnight on November 16 and was filmed on CCTV.

The masked, black-clad muggers encircled the victim, a 31-year-old guy, before knocking him to the ground, where they dazed him and demanded the expensive watch.

The police struggled to identify the masked robbers despite being captured on CCTV and mobile phones.

The used vehicle, a Jaguar F-PACE, was stolen and had counterfeit license plates, leaving authorities with no leads.

In a desperate effort to apprehend the muggers, officers from the Met’s Flying Squad methodically examined the surveillance tape and identified a critical clue – a small sticker on the car’s windscreen – that would solve the case.

Motivated, officers combed through crime data to see how many Jaguar F-PACEs had been reported stolen and were still at large, resulting in 30 to 40 possible automobiles.

The team contacted each car owner to determine if any of their vehicles had unique identifying characteristics.

One told officers that their vehicle had a parking permit for their child’s school, which matched the description of the sticker seen on the getaway vehicle.

This was the moment the team had been waiting for, since it allowed them to establish the car’s true ‘identity’ and trail the criminals to a location where surveillance footage showed them meeting without masks.

Dramatic film of the assault then records the moment the victim’s father courageously ran into the group of masked assailants to protect his kid, fighting with them as one thug cuts his jacket with a carving knife.

The robbers also intimidated a third victim with a stun gun during the violent theft outside Harrods in Knightsbridge on November 16, 2021, and compelled her to hand over her watch, valued at around £200, according to the Isleworth Crown Court.

Moments later, the muggers fled in a stolen Jaguar F-PACE with phony license plates in place.

Faces concealed, Flying Squad investigators combed through hours of CCTV footage in an effort to identify the criminals and hunt them down.

They discovered a little label on the bottom right corner of the windshield of the stolen $40,000 vehicle.

This was the moment the team had been waiting for, as it allowed them to determine the car’s actual ‘identity’

Officers discovered that one of the 40 Jaguar F-PACEs that were recently taken had a parking permit for his child’s school.

Detectives combed through further CCTV footage of the vehicle and eventually discovered film of the burglars meeting without masks.

Thomas Lenaghan, age 23, and Ronnie Fitzgerald, age 20, were apprehended following the circulation of their photographs.

A forensic investigation linked the men to the Jaguar that was later recovered in a Fulham parking lot.

Both were sentenced to six years and nine months in jail after pleading guilty to all charges at a previous hearing on October 5, 2017.

John Stovell, age 50, was sentenced to 18 months in prison after admitting to handling stolen items and aiding a criminal.

Police reported a breakthrough in the investigation when they were able to identify the stolen vehicle with fake license plates.

DC Robert Rodak, who participated in the inquiry, stated, ‘This was a frightening and violent crime that left the victims understandably shaken and feeling tremendously fortunate that they did not sustain more serious injuries.

Everyone should be allowed to stroll through our streets untouched by this type of crime, which is why we are doing everything possible to remove Lenaghan, Fitzgerald, and Stovell off the streets.

This conviction was the outcome of a collaborative effort in which our local team was helped by the specialized expertise of the Flying Squad.

Detective Chief Superintendent Owain Richards, who is in charge of local policing in Kensington and Chelsea, stated, ‘In recent months, we have been concentrating our efforts in locations where we have observed a spike in watch thefts.

This case illustrates, we hope, that the perpetrators of such acts will be found and brought to justice.

»London robbers who stole £100k Rolex off US tourist are jailed«