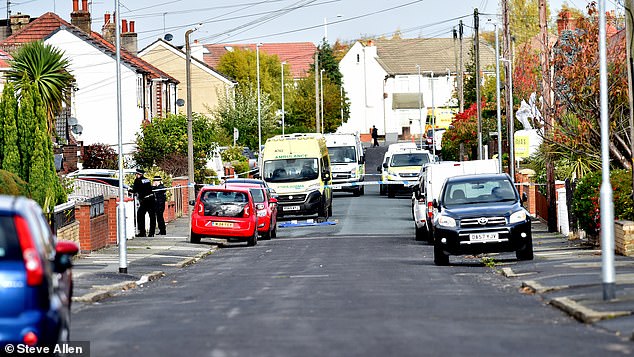 Local authorities have identified the 50-year-old woman who was fatally shot in her house on a quiet residential street, as police detain a pensioner on suspicion of murder.

Jackie Rutter, who suffered a gunshot wound to the chest in the event, was identified as the victim by neighbors.

Around 1.45 am on Sunday, emergency services were summoned to an address in Moreton, Merseyside, where they made an arrest of a 79-year-old male.

Police stated that a woman who had a chest trauma consistent with a gunshot wound was declared deceased at the site. The victim knows the guy, who is still being held in prison while being questioned.

Residents reported hearing “bangs” in the middle of the night that they originally mistook for fireworks.

A resident who wished to remain anonymous reported hearing a gunfire about 1.05 am.

She said, “At first I assumed it was a firecracker.”

But when I subsequently walked outside to purchase some milk and bread from the store, I saw all the cops, so I realized something serious had occurred.

“I knew the deceased woman, and she had lived there with her father for years,” the speaker said.

She described witnessing a guy who was saying “I didn’t do it” “being dragged away in handcuffs.”

She said, “It’s strange that someone I know was shot on this road since it’s typically so calm.”

Pictures from the site show a sizable cordon that has been up at the Meadowbrook Road property, and police have been reassuring locals.

Outside a building on the road, forensic officials could be seen searching for evidence.

Beautiful fishing lakes, the Royal Liverpool Golf Course, and the famed Red Rocks beach on the Wirral are all within a few miles of the residential road, where the typical property costs £230,000.

The distance between Meadowbrook Road and seven different primary schools is less than a mile, and it is also conveniently located near highway connections to Liverpool and Chester. Meadowbrook Road is 0.9 miles from Moreton railway station.

In the vicinity, CCTV and door-to-door inquiries are also being conducted.

Merseyside Police Chief Inspector Derek Riley stated: “Although a man has been detained in connection with the awful murder of this woman in Moreton, our investigation is still in its very early stages, and local inquiries into the event are still underway.”

“I would kindly request that anybody who was in the vicinity of Meadowbrook Road in the very early hours of this morning and believes they have caught anything noteworthy on their doorbell camera or dashcam contact us immediately.

“I would also urge anybody who has any other information they feel might help with our inquiry to come in contact as this could be crucial to our inquiries,” the statement said.