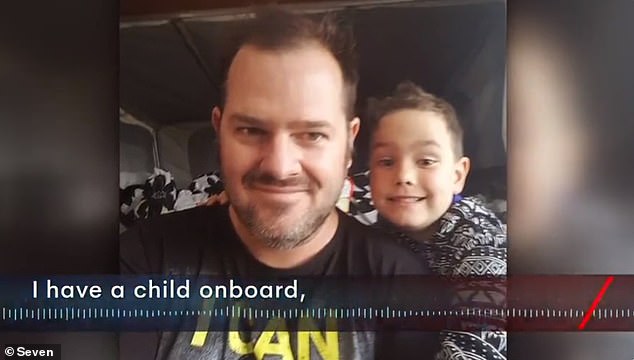 ‘We are in the water, and we are being crushed by broken furniture.’

The yacht dashed up against the Transit Rocks reef, near Thomson Bay, about 8.30pm, before the call went out.

Inspector Steve Scott from WA police said the water was very rough and would have been ‘scary’ and ‘distressing’ for the occupants, especially as they were in the dark.

‘I believe they suffered a mechanical issue that meant that the vessel was stuck in gear and as a result it was very difficult for him to avoid the reef,’ he said.

Police said that after the pair hit the snag the skipper remained calm and activated his EPIRB – emitting a distinctive radio signal allowing for police to locate people.

Water authorities tried to rescue the stranded father and son a number of times before the wind changed direction, giving rescuers a window of opportunity.

By 10pm the duo were safely in rescuers’ hands, after police navigated closer to save them despite the hazardous weather conditions.

The newly acquired jet boat used for the rescue is one that can operate in very shallow water, which allowed them to get much closer to the vessel and the reef.

The young boy’s arm was broken during the terrifying mishap, with the dad suffering some bruising.

‘When you go out onto the water it’s an unforgiving environment. We ask people to be prepared — as a skipper know where all your safety gear is, and all your crew on board are given a safety briefing,’ Insp Scott said.

The yacht was still sitting on the reef on Friday night and local authorities will liaise with the owner to retrieve it.