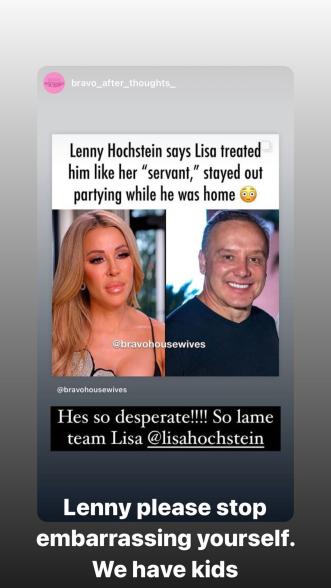 Lisa Hochstein wants her estranged spouse to quit “embarrassing” himself during their contentious divorce proceedings.

The “Real Housewives of Miami” star published a report on her Instagram Story revealing Lenny Hochstein’s allegations that Lisa treated him as a “servant” and responded, “Lenny, please quit embarrassing yourself.

“We have children,” she said.

Lenny and Lisa share the children Logan and Elle.

In an Instagram comment, the plastic surgeon claimed that Lisa, 40, “regularly shouted” at him, partied when he was “home,” and “refused to do anything with him.”

After he alleged she abused him, the “Real Housewives of Miami” star warned the plastic surgeon to stop “embarrassing” himself.

He also said Lisa “criticized everything” he did with the exception of his “hard work.”

When Page Six contacted the Bravolebrity to react on the claims, Lisa brought up the “hot mic” incident in which Lenny confessed his intention to divorce her.

“After getting caught on a hot mic with no means to retract his infidelity and foolishness, he uses social media with his ‘home-wrecking whore’ girlfriend to fabricate tales.

“Lenny,” she continued, “I’m growing increasingly concerned for you.”

The plastic surgeon has moved on with the pictured model Katharina Mazepa.

Despite the fact that Lenny, 56, filed for divorce from Lisa in May, the split is only now playing out on “Real Housewives of Miami” – and it’s also receiving attention on social media.

Lisa released a video of herself confronting Lenny and his girlfriend, Katharina Mazepa, in a Miami nightclub in May, just last week. In reaction, Mazepa stated, “The video she published is a sample that in no way depicts the events of that night and is utilized completely out of context.

“She anticipated our presence and actively sought us out,” Mazepa asserted. “She charged at me, attempted to shove me, attacked and threatened me.”

»Lisa Hochstein instructs Lenny to cease “embarrassing” himself: ‘We have kids’«