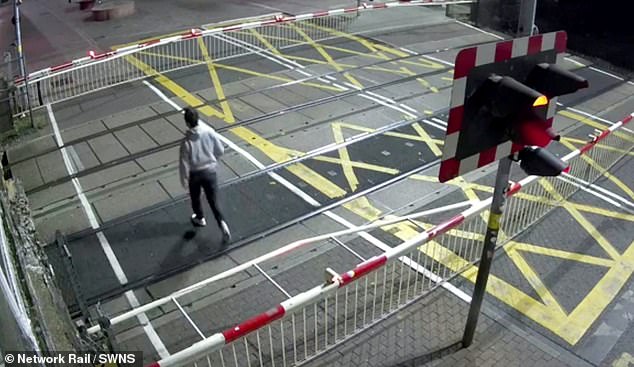 A young man slips on the active railroad tracks at a level crossing just before a train rumbles through, as captured on shocking video.

Following the close call in the center of Lincoln’s city center, Network Rail has shared the unsettling CCTV as part of a warning to incoming freshmen.

A young man in black trousers and a grey sweatshirt, who seems inebriated, is shown in the video disregarding the evident alerts and scaling the level crossing barriers to cross the railroad lines.

After he clears the two live rails on Lincoln High Street, a large freight train barrels through at around 100 mph while honking its horn in less than four seconds.

The man appeared to have been unaware of the threat the whole time.

The video was made public as a “lesson in rail safety” for the newest class of University of Lincoln students.

With more than 200 trains passing through this busy level crossing every day, Network Rail said that knowing how to utilize it properly was “paramount” for both newcomers to the city and long-time inhabitants.

It might be dangerous to cross the railroad at the level crossing on Lincoln High Street if it is not utilized properly.

“People need to be very conscious of the risks, pay heed to the obvious alerts, and exercise caution while crossing the tracks, especially if they are intoxicated.

“We’ve collaborated with our partners in the rail sector to give a tough lesson to freshmen at the University of Lincoln and assist them understand how to be safe near the train.”

East Midlands Railways (EMR), Network Rail, and British Transport Police (BTP) have now teamed together to provide advice to students on how to keep safe on a night out.

As part of the University of Lincoln’s “keeping safe on a night out” week, they gave freshmen a crucial safety presentation.

The advice is to stop, look and listen, pay attention to what’s going on around you, obey instructions from teachers and signage, and always look both ways before crossing. Do not cross if a train is approaching; pay attention to the warnings (lights, barriers, alarms).

In addition, BTP Chief Inspector Rick Sweeney said, “The railroad is not a place to cut corners.

‘Going a little faster is not worth the danger, and we have seen first-hand that this may result in terrible results or life-changing injuries – both scenarios are preventable.

There is absolutely no justification for disregarding the safety protocols at level crossings.

Trains may reach 125 mph, sit broader than the rails they ride on, and are often quieter than anticipated.

The public is still our eyes and ears, and they may assist us by texting 61016 or phoning 0800 40 50 40 to report any concerns or occurrences to us directly.

“The individual engaged exhibits a callous disregard for their own life as well as the security of train passengers and railroad employees.”

We hope that this film serves as a vital reminder to always observe the regulations and be aware while crossing the lines. Ignoring warning signs and instructions at level crossings may have disastrous consequences, particularly when under the influence.