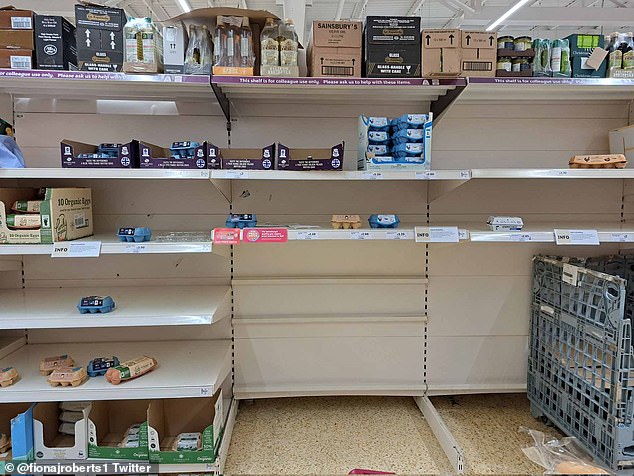 Today, shoppers tweeted photographs of empty shelves at Lidl and Sainsbury’s stores, and signs were displayed encouraging people to limit the number of eggs they purchase in response to the country’s worst avian flu outbreak ever.

The outbreak has resulted in the culling of around 48 million hens, a mixture of birds raised for consumption and those producing free-range eggs, and it is now required by law to keep captive birds and poultry indoors and adhere to rigorous biosecurity regulations.

There is a possibility that more businesses would ration eggs to prevent disappointing customers who have previously been affected.

Lidl and Sainsbury’s have been contacted by MailOnline for comment.

TODAY: Empty egg shelves at a Sainsbury’s, as shown in a Twitter snap.

PRESENT: A notice promoting egg rationing in a Lidl in Wokingham

Andrew Opie, head of food and sustainability at the British Retail Consortium, stated, “While avian flu has impacted the supply of some egg products, retailers are specialists at managing supply chains and are working diligently to minimize customer damage.”

Helen Watts, from the wholesale supplier Freshfields Farm Eggs in Cheshire, stated that avian flu had impacted supplies as a large number of birds had to be culled and that the situation was “gradually deteriorating.”

Wed., a sign at Sainsbury’s in Dorking informed shoppers, “We are currently having supply challenges with our fresh egg selection.”

The British Egg Industry Council stated, “Although egg availability fluctuates based on supply and demand, supply is currently somewhat limited.”

Defra, the ministry of food and agriculture, stated that there was no “immediate threat” to the food supply chain, including eggs.

The shortages occur against the backdrop of growing food inflation, which reached 14.6% in the 12 months preceding September’s conclusion, according to government data.