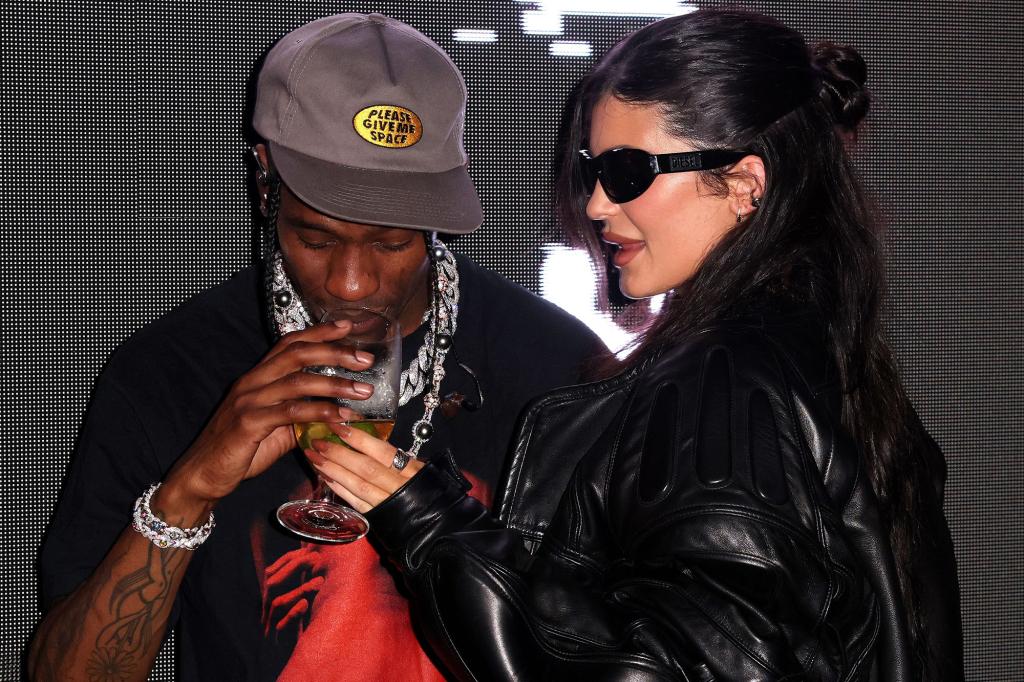 “Everyone who was anyone was there,” a well-dressed partygoer told Page Six of the annual “After Dark” party, which began with a performance by 50 Cent lasting almost an hour.

Meanwhile, Leonardo DiCaprio, who has been making the rounds at Art Basel parties, came by boat and wearing his distinctive baseball cap.

Prior to sitting at a VIP table, the 48-year-old actor was seen enjoying himself on the packed dance floor with his close friend Tobey Maguire during 50 Cent’s performance.

Kim and Khloé Kardashian partied with 50 Cent and other celebs on Friday night at Wayne and Cynthia Boich’s Art Basel bash.

The “Wolf of Wall Street” actor was reportedly drenched by a fan who approached him as he was dancing among a sea of models, but fell into a puddle of water while trying to say “hello.”

A spy observed, “This poor man completely wrecked his shoes for Leo, but it was probably worth it.”

Leonardo DiCaprio was flanked by his crew as he sat at a VIP table.

Kim, 42, and her 38-year-old sister Khloé Kardashian were spotted partying at their own VIP table with Venus and Serena Williams.

According to a source, the Kardashian sisters arrived at the party as 50 Cent was leaving and encouraged him to do a second set.

“As Kim and Khloé Kardashian entered the home to be taken to their friend’s table, they observed Wayne Boich, 50 Cent, and Serena Williams conversing,” stated a source.

50 Cent then returned to the stage alongside Kim, Khloé, Jonathan “Foodgod” Cheban, and restaurateur David Grubman for an unexpected encore.

The Kardashian sisters established a relationship with Venus and Serena Williams.

However, the unique performances continued. Before taking the stage to perform at the fancy party, Travis Scott and Kylie Jenner drank together prior to their arrival.

Before Travis Scott took the stage, Kylie Jenner drank tequila with her sisters and close friend Hailey Bieber, according to a source. During his act, he invited presenter Wayne Boich and basketball player Dwyane Wade to down a shot of Don Julio 1942 alongside him.

In the DJ booth, the “Sicko Mode” rapper was observed making out with Jenner, with whom he shares two children. Several of his most popular songs were also played, including “Goosebumps,” “Highest in the Room,” and “No Bystanders.”

Khloé wore camouflage leggings and sunglasses to the party.

Venus, 42, was reportedly spotted buying beverages at one of the bars for “regular people” prior to entering Kim’s VIP section.

Cuba Gooding Jr. appeared to be having the most fun at the party and was striking up conversations with unexpected individuals.

At one point, he stunned the audience by singing Journey’s “Don’t Stop Believing” on the karaoke machine.

“That was for you, Travis!” said the 54-year-old “Jerry Maguire” actor into the microphone before departing the platform and moshing with Scott and Zack Bia to Chase B’s beats.

An hour-long show by 50 Cent, followed by an encore, brought the house down. After the celebration, he played in the megaclub E11even.

When DJ pair Soffi Tukker took the stage, Khloé and Diddy were spotted salsa dancing in the gorgeous living room of the Boichs’ waterfront mansion.

An ecstatic guest raved to a buddy, “It was truly the most incredible Art Basel party ever!”

At the party, Hailey Bieber spoke with David Grutman.

We’re informed that over a thousand people were denied entry.

Kim and Khloé were photographed visiting Art Basel earlier in the day before attending Nylon’s party at Grubman’s Strawberry Moon.

»Leo DiCaprio, Kim Kardashian, and others celebrate during a “epic” Art Basel party«