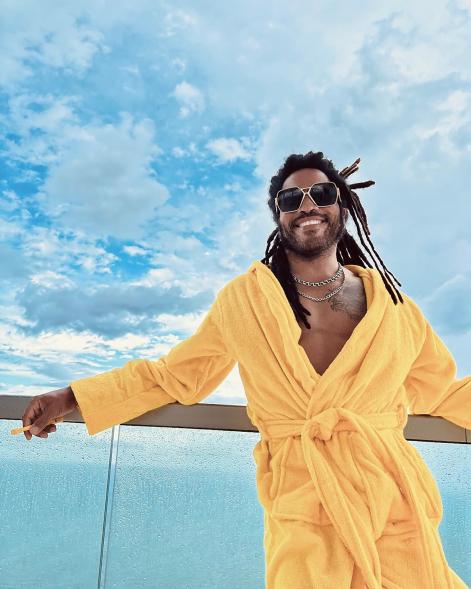 Suns out, buns out!

Thursday, Lenny Kravitz shocked his Instagram fans with a photo of himself wading in the water while nude.

The singer’s back, arm, and butt were visible in the photo as he walked through thigh-high water in a tropical locale.

The 58-year-old captioned the photo, which displayed a tattoo on his rear, “New birth.”

The songwriter’s 4,1 million Instagram followers praised his uncommon exhibition of nudity in the comments section.

DJ Diplo joked, “I mean, come on, bro, leave some crumbs for the rest of us.”

Fans went to the comments section to express their enthusiasm for the NSFW image.

Who else attempted to flip their screen? “Good God, this man was sculpted by the gods,” read one comment.

“Who zoomed in?” another social media user questioned.

“I swiping right for more pictures,” said another of Kravitz’s fans.

Although the Grammy winner did not identify where the shot was taken, he may have been at his Bahamas home. During the COVID-19 outbreak, Kravitz went to the island of Eleuthera with his belongings.

In 2020, Kravitz said to Vanity Fair, “Every day is perfect in the Bahamas.” “It makes no difference whether it’s sunny or pouring. It is always beautiful here.”

While living his best life overseas, it appears that the “Again” singer is unattached.

From 1987 to 1993, Kravitz was married to Lisa Bonet, with whom he had the daughter Zo Kravitz. Although Bonet married Jason Momoa in 2017, she and the star announced their split in January of last year.

Since his divorce, Kravitz has had relationships with models Vanessa Paradis and Adriana Lima, as well as actor Nicole Kidman.

»Lenny Kravitz appears nude in the ocean with the words, “New birth”«