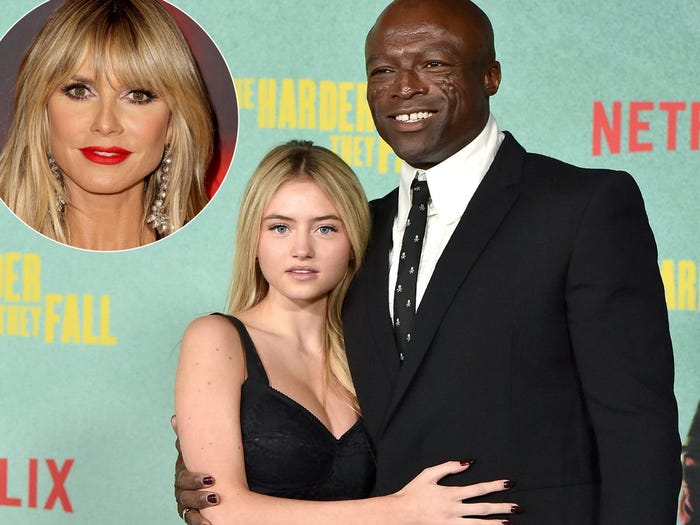 She is her father’s girl.

Leni Klum, Heidi Klum’s 18-year-old daughter, walked the red carpet with her father, Seal, more than a decade after her parents’ divorce.

The father and daughter attended the Los Angeles premiere of “Shotgun Wedding” on Wednesday evening.

Leni and her father shared the tender moment, grinning for the photographers as he wrapped his arm around her.

The model appeared fashionable in a strapless black minidress and matching pointed-toe slingbacks and box clutch. She completed her appearance with a red lip and matching claws.

Meanwhile, the 59-year-old singer of “Kiss from a Rose” was elegant and comfortable in a black bomber jacket zipped over a white T-shirt. In addition, he wore black trousers and white sneakers.

Flavio Briatore, an Italian businessman, is Leni’s biological father. But while she was pregnant with Leni, Heidi ended her relationship with Briatore and began dating Seal.

In 2005, the “Project Runway” alum married Seal, and that same year, Seal adopted Leni. While Heidi and Seal separated in 2012 and divorced two years later, Seal continued to raise Leni as his own, and the two have remained close throughout their separation.

Leni has been vocal about the term “nepo baby” and the benefits of having two renowned parents.

“It’s a simple fact. Leni told People in October 2022, “My parents are famous” “I did have assistance in the beginning of my career, and I am aware that many people would love to have had the same opportunities. I am very grateful that I was able to accept what my mother gave me.”

However, Leni stated that her status should not diminish the effort she puts into her career.

“I am putting in the work and the hours. Now I’m working independently, traveling alone, and attending school,” she stated. My mother and I share a passion for the same thing.

Leni has recently photographed a lingerie ad with the former Victoria’s Secret Angel, following in her mother’s footsteps. For the photoshoot, Leni and Heidi received criticism, but her daughter defended their partnership.

Leni told Page Six exclusively at her mother’s annual Halloween party last November, “I honestly didn’t look at many of the reactions.” “Overall, I am pleased with the campaign, and I had a wonderful day with my mother.” I believe the images turned out beautifully, and we had an incredible time.”

Leni gushed about her mother and was ecstatic to have the opportunity to collaborate with such a seasoned expert.

I adore her. She provides inspiration. I could go on and on about the counsel she provides me, the way she works, and everything else about her,” Leni remarked, adding, “I adore working with her.”

In 2019, Heidi wed Tom Kaulitz, with whom she displays copious PDA. In addition, she was previously wed to Ric Pipino from 1997 to 2002. In the meantime, Seal has not remarried, but Page Six revealed in August 2021 that he is seeing Laura Strayer, his former personal assistant.