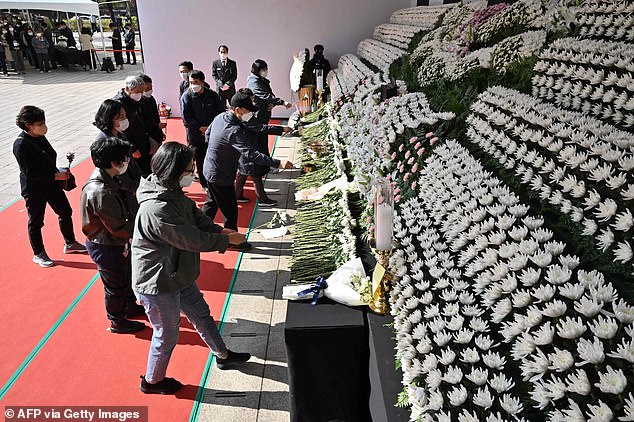 After surviving the throng, a survivor of the stampede that left 154 Halloween revelers dead in Seoul has described the horrifying sight of 40 corpses lying around her.

Authorities are being criticized for their lack of crowd control as 100,000 individuals – largely in their teens and 20s and dressed in Halloween costumes – flooded the streets of the well-known Itaewon nightlife area. They were enjoying the first night out without Covid restrictions in three years.

In comparison to past years, police claimed to have deployed 137 officers today, but observers said they were more concerned with stopping drug usage than crowd management in the narrow, twisting lanes.

Lee Ji Han, a 24-year-old actor and singer who participated in the reality TV project Produce 101 to form a K-pop band, was one of the fatalities.

Students from the Netherlands and Italy, Mink and Federica, joined the festivities on Saturday night just as partygoers were collapsing and requiring CPR.

Everyone had been having a good time, grinning, being wild, and looking fantastic. Simply said, it was unimaginable that it would occur.

Federica said, “Police are renowned for being present everywhere in Seoul, and you always feel protected. It could have been handled better.

The 154 casualties were largely young women, and today, mourners gathered to shrines honoring them. They could be seen crying, praying, and laying flowers on the official altar put up for the victims.

The 19-year-old student Hwang Gyu-hyeon, who was crying and had trouble speaking coherently, told AFP, “I am heartbroken by what occurred; they were simply trying to have a nice time.”

I offer the victims my prayers. Despite the obvious warning indicators that were there earlier, I can’t believe this event occurred. For this audience, nothing was done, the woman added.

The youthful victims must have been “excited and lively,” Song Jung-hee, 69, said, ready to take advantage of their first night out without Covid restrictions in three years.

No mask wearing or group restrictions were required for revelers to have a good time.

She told AFP, “If only there had been enough police officers to maintain order, this would not have occurred.”

It is true that Lee Ji Han died as a result of the accident in Itaewon on October 29, according to a statement from 935 Entertainment.

‘We were stunned to hear the news and also hoped it wasn’t true. Right now, the family is going through a great deal of loss, so we are being extremely careful. Peace be upon him.

Later on, they added: “Please give [Lee] a heartfelt goodbye; he departed us way too soon. Lee, who shined brilliantly with his enthusiasm for performing, will also be remembered.

Ji Han became well-known during the second season of Produce 101, a game show in which 101 candidates battle it out to join a K-pop band.

Later in 2019, he made an appearance on the well-known drama series Today Was Another Nam Hyan Day.

Numerous mourners gathered at a temporary memorial outside an Itaewon subway station, many wiping away tears as they placed white chrysanthemums and bottles of soju on the altar.

A memorial sign said, “At a time when you were all ready to bloom like flowers… My heart is shattered. I ask that God provide eternal peace to all souls in paradise.

As apparent breaches in crowd management and enforcement revealed on Monday, calls for responsibility grew in the media and online.

According to Lee Young-ju, a professor at the University of Seoul’s Department of Fire and Calamity, “This was a disaster that might have been handled or averted.”

However, no one took initial responsibility for this, therefore it was not addressed.

Online rumors also circulated that police this year failed to effectively control the crowd, allowing an excessive number of people to assemble near the subway station and in the passageway that served as the disaster’s focal point.

Twitter user @isakchoi312 stated, “I’ve lived in Itaewon for ten years and celebrated Halloween every year, but yesterday was by no means unusually packed compared to prior years.”

“In the end, I believe crowd control was the disaster’s primary cause.”

The administration had defended the police strategy on Sunday.

Interior Minister Lee Sang-min said at a press conference that “(the crush) was not an issue that could be remedied by deploying police or firemen in advance.”

The legislation requires protest organizers to notify authorities in advance of their activities, but the young people who flocked to the Itaewon Halloween gathering were exempt from this obligation.

The narrow downhill corridor had been jam-packed with tens of thousands of partygoers.

Witnesses recounted scenes of mayhem as individuals shoved and pushed their way through the throng without any police officers in sight to direct or control them.

Others spoke of being crammed into a small, sloping passageway and attempting to escape the oppressive crush by climbing on top of one another.

The education ministry confirmed on Monday that at least six young teens were among the casualties. The majority of the 154 dead, including 26 foreigners, had been recognized on Sunday.

However, with at least 33 individuals in critical condition, authorities warned that the death toll might increase further.

The nation began a week of mourning, with all entertainment and music events postponed and flags flying at half-staff countrywide.