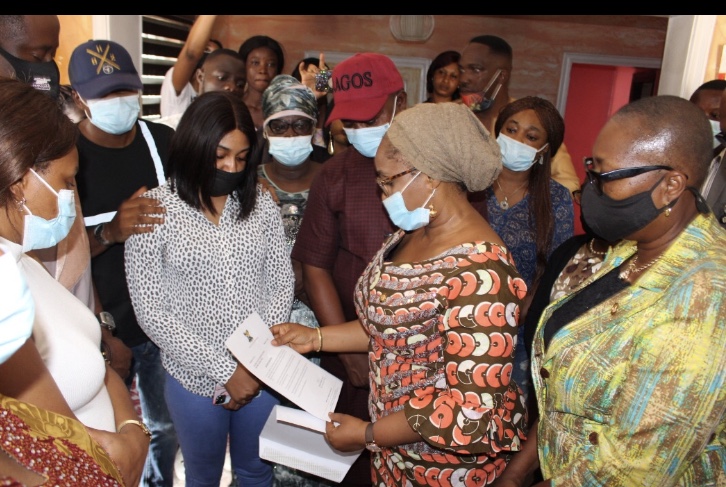 A high-powered delegation comprising the Lagos State Commissioner for Tourism, Arts and Culture, Mrs. Uzamat Akinbile-Yussuf, the Special Adviser on Tourism, Arts and Culture, Mr. Solomon Bonu and a member of the Lagos State House of Assembly representing Surulere Constituency I, Mr. Desmond Elliot, among other government officials on Tuesday visited the Magodo residence of late Nollywood Actress, Rachael Oniga to condole with the deceased’s family.

The Commissioner presented a Letter of Condolence to a representative of the family, stating that the visit was at the instance of Governor Babajide Sanwo-Olu.

According to Mrs. Akinbile-Yusuf, the deceased actress made an impact in the industry that made it impossible for anyone not to pay tribute and acknowledge her contributions to Nollywood.

She urged the family to accept the shocking death as an act of God, imploring them to avail the State Government information about the burial details so that the necessary support can be extended.

“We share in your grief, this is not a loss to the film or entertainment industry alone or the immediate family members. It is a huge loss to the State Government and specifically to the Ministry of Tourism, Arts and Culture”, she stated.

In his address, Mr. Desmond Elliot, consoled the family, saying “Please, accept our condolences, it’s a loss to us as a people and as a State. The Governor and other government officials are also heartbroken”.

Responding on behalf of the family, a brother-in-law to late Rachael Oniga, Engr. Abimbola Odusote, said, “We appreciate the State Governor, Deputy Governor, Members of Lagos State House of Assembly and the delegates that the Governor has sent to come and commiserate with us at this time, may God bless you all”.

The Permanent Secretary, Ministry of Tourism Arts, Princess Adenike Adedoyin-Ajayi and some Directors from the Ministry were also part of the delegation that visited the deceased’s family.