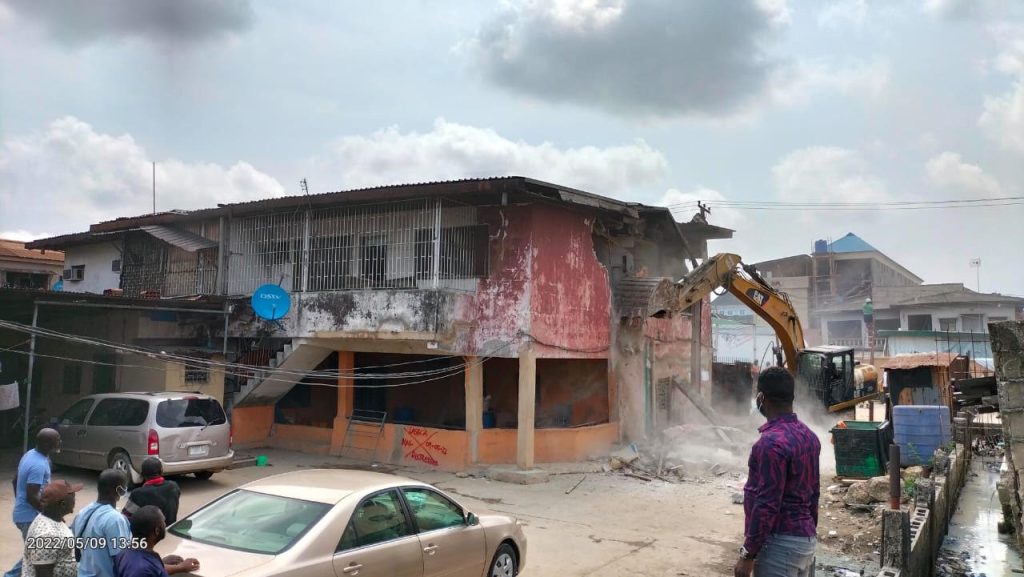 The distressed building at 47, Jebba Street in Ebute-Metta area of Lagos, demolished by LASBCA.Commends Communal Efforts, Cooperation of Residents

As part of the ongoing removal of distressed buildings, the Lagos State Building Control Agency (LASBCA) has demolished a distressed building located at 47, Jebba Street in Ebute-Metta area of Lagos, just as it marked over 10 other structurally defective buildings for demolition.  The General Manager of LASBCA, Arc. Gbolahan Oki, who spoke during the demolition and enforcement exercise, commended the community leaders, youths and residents of the area for their support.

He listed other buildings marked for demolition by LASBCA before the end of the week as being located at 37, Coates Street; 3, Ondo Street; 14, Ondo Street; 16, Church Street; 13, Ibadan Street; 3, Simpson Street; 35, Jebba Street; 11, Jebba Street and 19, Ibadan Street among others, stressing that the exercise is a proactive step by the Agency to prevent loss of lives and property.  Arc. Oki declared that the move had become imperative to rid the State of inhabitable structures, promote standards and attain a livable, organised and sustainable built environment.

Speaking further, Oki said, “We urge the people to recognise the urgency in this matter as we cannot afford to wait for another building to collapse; because every distressed building is a disaster in waiting”.  “Occupants of distressed buildings will keep asking for more time before they vacate but the truth is that we cannot afford to wait in the matter of life and death”, he added. The General Manager maintained that the refusal to vacate distressed buildings based on cultural and emotional attachments is not tenable because such excuses only encourage indiscriminate developers to take undue advantage.

Arc. Oki, therefore, appealed to owners/occupiers of distressed buildings across the State to vacate immediately, most especially during the present season with prevalent cases of building collapse.  He also urged Lagosians to emulate the conduct, cooperation and support of the youths and residents of Ebute-Metta, who responded positively to the government’s call for reporting distressed buildings to appropriate authorities and agencies.

The General Secretary of the Association of Real Estate Developers of Nigeria, Lagos State Chapter, Builder Olumegbon Mutairu commended the efforts of the State Government in ridding the State of distressed buildings. He promised the continued support of members of the association, especially in providing helpful information about the status of buildings across the State.