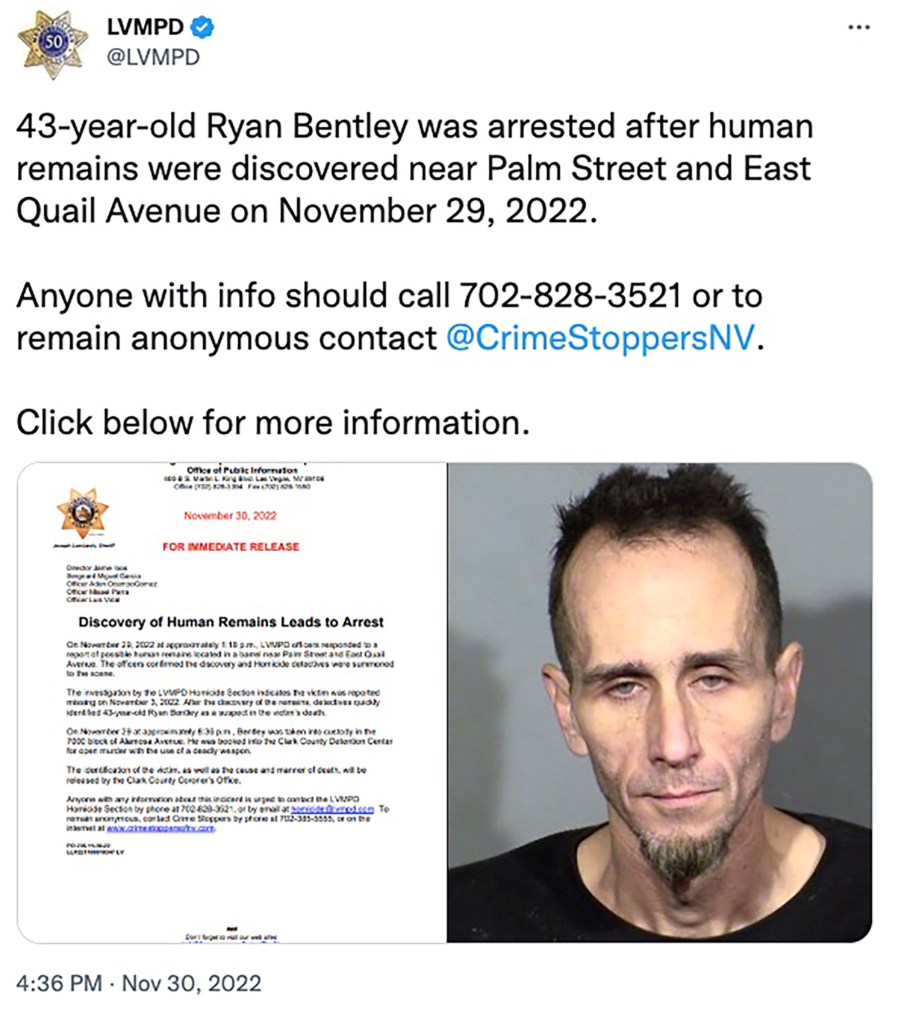 A man from Las Vegas is accused of fatally shooting another man, dismembering his body, and placing the pieces into a barrel that was recovered weeks later.

Ryan Bentley, 43 years old, has been charged with murder and murder conspiracy. In October, he allegedly murdered and dismembered Rene Olmos Enriquez Jr., 39.

According to the Las Vegas Review-Journal, Enriquez’s bones were discovered almost three weeks later, on November 29, stuffed into a barrel found near Palm Street and East Quail Avenue in Las Vegas.

On November 3, Enriquez was reported missing by his family.

According to court documents, the accusations against the second defendant, 30-year-old Angelica Hudson, were dismissed less than a month after her arrest.

Witnesses informed officials that Bentley believed Enriquez “ratted” him out for possessing illegal drugs. According to the police report, less than two weeks before Enriquez was murdered, authorities searched his residence and discovered 115 grams of meth, 69 grams of heroin, and 50 grams of fentanyl.

Enriquez was brought to a local hospital for treatment rather than being arrested at the time. Since he was not arrested, Bentley believed he had disclosed the drugs to authorities.

Bentley then convinced Enriquez to enter his residence by claiming he had a “care package” for him. According to the report, he warned Enriquez that he may either be murdered or lack sufficient fentanyl to commit himself.

Bentley will be arraigned on January 26, according to court documents.

Enriquez ingested the narcotics and passed out, leading Bentley and a group of his friends, including Hudson, to believe that he had died. When he awoke and attempted to flee, Bentley fired upon him.

The following day after being released from jail on narcotics charges, Bentley returned home to dismember Enriquez’s body. His pals told authorities that he subsequently placed the remains in a 55-gallon barrel.

Police later discovered messages from Bentley’s Facebook page, some of which described how he dismembered and hid Enriquez’s body inside the barrel after he was released from jail.

According to court documents, Bentley was indicted by a grand jury on January 6 and will be arraigned on January 26.