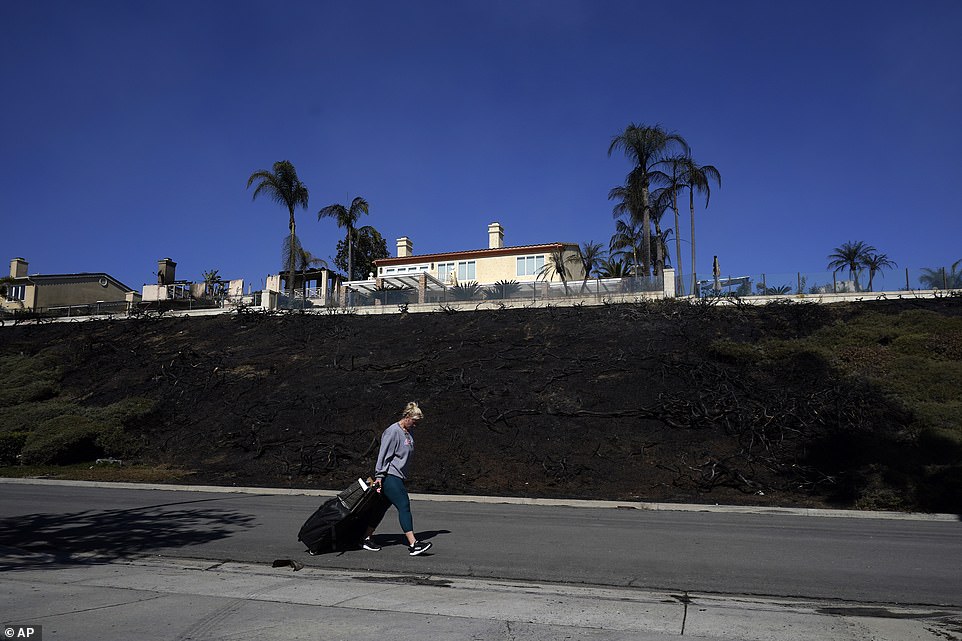 Devastated residents returned to what’s left of their multi-million dollar homes less than 24 hours after a wildfire ripped through the community of Laguna Niguel.

Heartbreaking images captured the moment residents realized they had lost everything. The community’s former mayor Fred Minagar described the once quiet community as being like ‘war-zone.’

A woman who raised her family in a home that has been reduced to rubble said she wasn’t sure if they would try to rebuild their $3 million house. ‘Maybe it will be too hard,’ she said.

While a married couple whose wedding photo was one of the few salvagable items from their home said that less than a year ago, they lost their business to a fire.

At least 20 multi-million dollar mansions were reduced to rubble in just a matter of hours.

The Coastal Fire, which began on Wednesday afternoon near a water treatment facility in Aliso Woods Canyon, has destroyed also damaged another 11, according to the Orange County Fire Department.

More than 500 firefighters, some from as far away as San Diego and Long Beach, have been fighting the flames while 900 homes in the area have been evacuated.

When DailyMail.com visited on Thursday, most of the fire had been put out in the Coronado Point neighborhood but flames could still be seen licking up the other side of Seaview canyon on which the community sits.

More than 24 hours after the outbreak, the blaze is only 15% contained, according Orange County Fire Authority division chief Shane Sherwood, who spoke at press conference on Thursday night.

Sassan Darian, 38, sat on a curb watching firefighters douse the remains of his father’s five-bedroom home and recounted how he, his daughter and his father fled as winds blasted flames toward them and embers fell on them and around them.

The sky, everything was orange. It looked like an inferno, so we just jumped in the car,’ he said. ‘My daughter said, “We’re on fire.” There were sparks on her and we were patting ourselves down.’

Darian earlier posted videos on his Facebook page showing his father looking down as the fire began in the valley beneath his father’s home.

The day after the fire, Darian posted a photo of his father’s burned down house. He wrote in the caption: ‘My old friends from back in the day – remember the crazy party I had here when we were youngins?’

After being evacuated, Darian wrote on Facebook: ‘That was too close for comfort. I got live embers on my clothes when we evacuated.’

Orange County resident and former mayor of Laguna Niguel Fred Minager described the scene as being ‘like a war zone,’ in an interview with Fox11.

In an interview with the Los Angeles Times, Sandy Vogel said that she lived in her Coronado Pointe neighborhood for three decades. The bird house pictured above had been part of their home for 20 years.

Vogel told the Times: ‘We didn’t think our house was going to burn, but the winds were so strong yesterday that once the fire came up the hill there was no stopping it. We didn’t know the house had burned until we saw it on the news.’

When asked if she would remain in the community following the destruction, Vogel said: ‘We’ll rebuild and we’ll see if we want to stay here. Maybe it’ll be too hard.’

According to Zillow, Vogel’s home was valued at over $3 million.

In a separate interview with NBC Los Angeles, Vogel pointed at the rubble and said: ‘That was the living room. That was the family room.’

She added: ‘You can get through whatever devastation you’re dealt. It’s not always easy but you can make it as long as you’re OK.’

One man, Andreas Frank, who lost his home told CBS News: ‘It’s so random because just behind us, our friend’s home is safe, but on either side it’s destroyed.’

A resident of a nearby road who asked not to give his name spoke about the fire’s astonishing speed, telling DailyMail.com that it exploded into life and consumed 20 expensive homes in less than two hours.