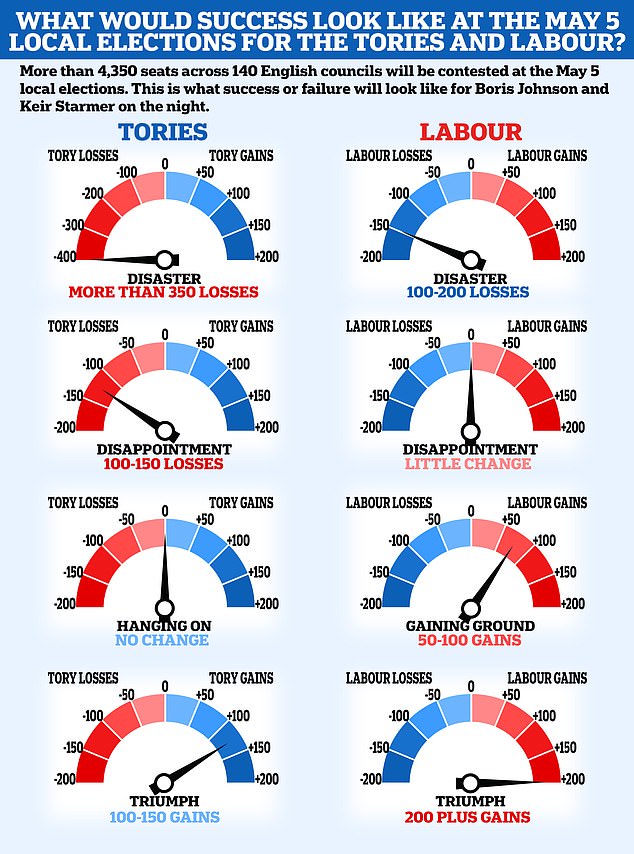 Labour looks to be facing an election backlash in suburbs around London and Manchester due to charges on motorists.

Tories and polling experts say the ultra-low emissions zone introduced by Sadiq Khan and a similar scheme mooted under Andy Burnham seem to have been hitting support.

They suggested the policies – being widely deployed on attack leaflets – could prove decisive in key areas where councils are on a knife edge.

Meanwhile, some candidates are branding themselves ‘Local Conservatives’ in an effort to dodge voter anger at the Partygate scandal threatening to engulf Boris Johnson.

Local elections are taking place across the UK on May 5, with more than 4,000 council seats up for grabs in England.

They include parts of the Red Wall such as Bury, as well as Leeds, Manchester, Birmingham and all 32 London boroughs.

There have been claims that the Tories are facing losing up to 800 seats – a scale of disaster which Mr Johnson would not be able to dismiss as a mid-term dip.

Labour and the Lib Dems have been accused of giving each other clear runs in seats where they are taking on Conservatives.

However, there are signs that Keir Starmer’s party has been struggling in some areas, with mixed results in council by-elections.

Many of the seats at stake date from 2018, which was a high water mark for Labour.

In a number of boroughs such as Wandsworth, Conservative candidates have been adding ‘local’ to ballot papers in an effort to offset the impact of Partygate.

Under the ULEZ, drivers whose cars do not meet tough emissions standards must pay a £12.50 daily charge to come into central London. That is in addition to the congestion charge and soaring fuel prices.

The CAZ in Manchester was expected to involve a £60 charge for HGVs, buses and coaches, £10 for vans and £7.50 for taxis and private hire cars.

However, it has been paused amid a bitter row between Mr Burnham and ministers over who was requiring its introduction and the burden on businesses.

One London Tory MP told MailOnline of ULEZ: ‘It’s playing very badly. A lot of people have to drive for a living.

‘The Tube service is all very well if you want to go to central London, but if you want to travel around outer London anything other than driving is a nightmare…

‘It is swinging our way in the outer boroughs. Croydon is a disaster for Labour. I would be amazed if they hung on there even though they have historically done well.’

Tory polling expert Lord Hayward said the motorist charges could sway broadly Conservative voters in suburbs who might have abstained, but instead might want to register an ‘objection to Sadiq Khan and the whole ULEZ approach’.

‘One of the few positives for Labour in 2021 was the performance of Andy Burnham and his coattails,’ he said.

‘This year his Clean Air Zone is working against Labour and for the Tory Party particularly in the outer Greater Manchester boroughs. Hardly a Tory leaflet is going out without reference to Burnham’s CAZ.

‘The London equivalent to the CAZ is the ULEZ which, if stories are to be believed, is helping the Tories in the outer London boroughs.’

Mr Johnson headed back on the campaign trail today insisting he is still an election asset – despite fears bad results could spell the end of his premiership.

The PM visited Bury – part of the so-called Red Wall – with just 10 days until crucial local and mayoral polls that are likely to decide his fate.

The Partygate scandal, which has seen Mr Johnson himself fined for breaching lockdown, has been hammering Tory support and sending his personal ratings through the floor.

But asked at the Bury FC ground whether he is still an asset to the party, Mr Johnson said: ‘I’m not denying that.’

He added: ‘I think that the greatest asset the Conservatives have are Conservative values and the way that Conservative councillors up and down the country deliver taxpayer value.

‘That’s what really matters. And I think that’s what people will be focused on, and we will be fighting for every vote right up till polling day.’