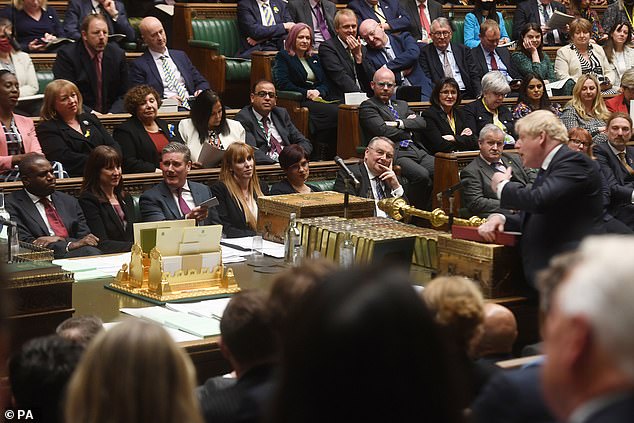 The claims were condemned as ‘categorically untrue’ by the Ashton-under-Lyne MP, who also hit out at ‘perverted smears’.

In a series of Twitter posts today, Ms Rayner said: ‘Boris Johnson’s cheerleaders have resorted to spreading desperate, perverted smears in their doomed attempts to save his skin.

‘They know exactly what they are doing. The lies they are telling.’

She accused the PM of ‘dragging the Conservative Party into the sewer’ and claimed the ‘anonymous Tory MPs doing his bidding are complicit’.

‘He and his cheerleaders clearly have a big problem with women in public life,’ she added.

‘They should be ashamed of themselves. I won’t be letting their vile lies deter me. Their attempts to harass and intimidate me will fail.’

Ms Rayner won support from across Westminster – including among Labour colleagues, opposition parties and political journalists.

The PM himself also intervened in the row, posting on Twitter: ‘As much as I disagree with Angela Rayner on almost every political issue I respect her as a parliamentarian and deplore the misogyny directed at her anonymously today.’

Ms Rayner thanked the PM for his comments.

Scottish First Minister Nicola Sturgeon, the SNP leader, offered her ‘solidarity from across the political divide’ to Ms Rayner, adding: ‘It’s a reminder of the deep misogyny women face every day.’

Labour former shadow minister Dawn Butler said it was Ms Rayner’s ‘words not legs that gets him rattled the most’.

‘It’s never what a woman wears that causes a man to offend or attack her,’ she added.

‘If the Tories don’t understand that they should step down and take some consent classes this is why rape convictions are so low.’

Conservative peer Lord Daniel Finkelstein said: ‘I think the MP or MPs responsible for saying this are shameful.

‘It is outrageous that Angela Rayner has to put up with this and the Tory party should do its best to identify who was responsible.’

Andrew RT Davies, the leader of the Welsh Conservatives in the Senedd, said: ‘This is a disgrace.

‘The anonymous misogynist fuelling this story is contributing to the atmosphere in which many women don’t feel that public life is for them. Unacceptable.’

The claims about Ms Rayner were made in relation to her clashes with Mr Johnson at Prime Minister’s Questions, which occur when Labour leader Sir Keir Starmer is absent.

It was suggested that Ms Rayner also employs the tactic when sitting next to Sir Keir when he faces Mr Johnson at PMQs.

One MP said: ‘She knows she can’t compete with Boris’s Oxford Union debating training, but she has other skills which he lacks.

‘She has admitted as much when enjoying drinks with us on the [Commons] terrace.’

Last night, a spokesman for Ms Rayner described the allegation as ‘categorically untrue’.

Ms Rayner, 41, a grandmother who left school at 16 while pregnant and with no qualifications before becoming a care worker, has frequently landed blows on the PM in the Commons.

During one encounter in January, Mr Johnson raised claims that she was agitating to succeed Sir Keir by saying: ‘We all know what job she wants.’

Ms Rayner hit back: ‘I’ve heard on the grapevine there might be a vacancy for Prime Minister soon, so maybe I should show aspiration.’

In Basic Instinct, Ms Stone played Catherine Tramell, an enigmatic writer involved in a relationship with a police detective played by Michael Douglas. Ms Stone claimed the scene in which she uncrossed her legs was filmed without her knowledge.

Last week, Ms Rayner accused Mr Johnson of having ‘mocked [the] sacrifice’ of Britons during the Coronavirus pandemic.

She said: ‘As a care worker, I know the sacrifices they made in the pandemic on the frontline, putting themselves at risk to care for others. It is the least that they deserve for the Prime Minister to be held to account for his own conduct.

‘While the Prime Minister was partying, they were unable to be with their loved ones in their dying moments, or unable to attend miserable funerals with only a handful of people because they were following his rules.’

A Labour source said: ‘Just when you think the Conservative party can’t get any lower they outdo themselves. The Conservatives clearly have a problem with women in public life.’