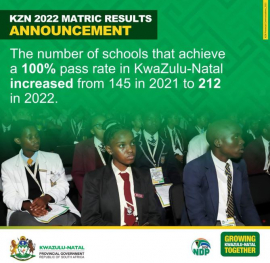 Premier of KwaZulu-Natal Nomusa Dube-Ncube has urged students to explore Technical Vocational Education and Training Colleges (TVET) as an alternative to college.

Premier Dube-Ncube said at Friday’s release of KwaZulu-Natal’s matric results in Durban that one of the reasons the government chose the three-stream model in the education system was to accommodate learners with talents who may have difficulty being admitted into universities.

“We are therefore encouraging leaners to also make use of the opportunity provided by TVET colleges. We have seen in the past few years a trend where industry and business is absorbing more graduates from TVETS as opposed to universities,” Dube-Ncube said.

“Last year, the floods pummelled KwaZulu-Natal causing damage to infrastructure and disrupted education. This resulted in 824 learners in eThekwini being placed among the displaced in 135 mass care centres, and later being moved into Temporary Residential Units (TRUs).

“Out of this number, at least 36 were in matric in 2022, and four had special needs. Despite these challenges, our resilience showed up. We ensured that these learners were given a fair chance and were not prejudiced by the impact of the flood disaster,” Dube-Ncube said.

Premier said that the 2022 results demonstrate an improvement in all districts, with Umkhanyakude being the most improved district, and that no school in the province earned a 0% pass rate.

This is a result of the implementation of the Ten-Point Improvement Plan, which was championed by the provincial Education Department.

“These objectives were meant to guide all the interventions for the improvement of the performance of the matric class of 2022. The province undertook to improve performance in Mathematics and Physical Science and sought improvement in the total number of distinction passes in 2022 [and] progress was achieved in all these areas.

“Attention to special schools has also resulted in significant achievement overall. The province has worked hard to improve education of learners with learning barriers,” the Premier said.

She said that the Department of Education would devise a decisive intervention approach to address the problem in the 11 schools whose performance was less than 30%.

“We note that they were 22 in 2021 and now have reduced to 11. The Education Department must conduct an evaluation and introduce an academic improvement plan with immediate effect.

“The Executive Council will receive the report with school by school analysis and will assist with relevant interventions,” Dube-Ncube said.

“We are excited about the increase in the number of Bachelor passes from 37% in 2021 to 42.5% in 2022, which marks a 5.4% improvement. The province is also pleased that girl learners performed well.

In addition, the Premier urged students to take advantage of digitalisation, robotics, and the Fourth Industrial Revolution (4IR).

She said that the province government is focusing on subjects such as Coding, Mathematics, and Physical Science.

“The province also recently launched the Mobile Digital Analytics Skills Laboratory to ensure that young people are exposed to the Fourth Industrial Revolution. We have taken a decision as the Provincial Government that we must assess the viability of schools with a low enrolment rate.

“Our view is that some of them could be converted into Vocational Skills Centers to address among others the shortage of technical skills for the country. These include among others Artisan, Plumbers, Electricians, Construction and Carpentry,” the Premier said.