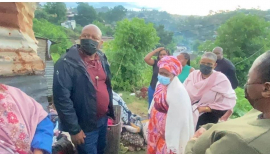 The KwaZulu-Natal Provincial Government is planning to set up 4 396 temporary accommodation sites as from the end of this week to accommodate families that are currently accommodated in community halls, churches and schools.

Giving the latest update on the response to the floods in the province on Sunday, KwaZulu-Natal Premier, Sihle Zikalala, said the construction of temporary residential units has started at Ilembe District, Ugu and eThekwini.

Zikalala said the provincial government is finalising the assessment of some sites in Durban in terms of their suitability for construction.

“We are encouraged by the support we are getting from the national government. An integrated approach involving three spheres of government is assisting to ensure speed and efficiency in the interventions,” Zikalala said.

Zikalala said that although government has reprioritised R1 billion towards disaster relief interventions, the province needs more than R1.9 billion to complete the work.

The Premier reported that, as of Sunday, 17 438 households have been affected by the disaster while 121 687 people were affected, and 435 people lost their lives.

To date, 54 people are still reported missing, with a total of 6 278 currently homeless, and 55 injured, due to the disaster.

“The number of those who remain in shelters is 7 245 people in eThekwini, 245 people in KwaDukuza shelters and the rest in Umzumbe Ray Nkonyeni, Umdoni. While at the shelter, residents receive mattresses, hot meals and vanity packs, which are being provided by South African Social Security Agency (SASSA), Department of Social Development and non-government organisations.”

He said many families have started laying to rest the remains of their loved ones.

A Task Team has been established to coordinate support provided by government to bereaved families and those affected by the disaster in various municipalities in KwaZulu-Natal.

To support the efforts of normalising the situation and the environmental impact after the floods, Zikalala said the Department of Cooperative Governance and Traditional Affairs (COGTA), together with municipalities, is implementing a clean-up campaign in the affected districts.

He said the campaign is being implemented through the utilisation of Community Works Programme participants, and the other component involves the use of yellow plant equipment as a supplementary resource.

“The campaign commenced on the 19 April 2022 in Ugu, eThekwini, iLembe, King Cetshwayo, Amajuba and Umgungundlovu and is proceeding very well.”

With regards to the cost of the damage so far, Zikalala said it is now estimated that the largest expenditure on rehabilitation will come from PRASA-related infrastructure.

The Premier expressed his appreciation for the donations from the people, including the Mpumalanga Province in the form of blankets, tarpaulins, water purification sachets and mattresses.

He also thanked SASOL for donations in support of the effected families, as well as AVBOB, which has set aside R3 million to assist with burial costs.

“We are also heavily indebted to the Motsepe Family Foundation which has generously donated R30 million to be used largely to cover the burial costs. In the hour of need our people have been pleased to discover that they are indeed not alone.

“We have seen our President Cyril Ramaphosa, our National Ministers and Deputy Ministers, the Faith-Based Community, Traditional Leaders, Business Leaders and all Political leaders descend on our shores to offer support.