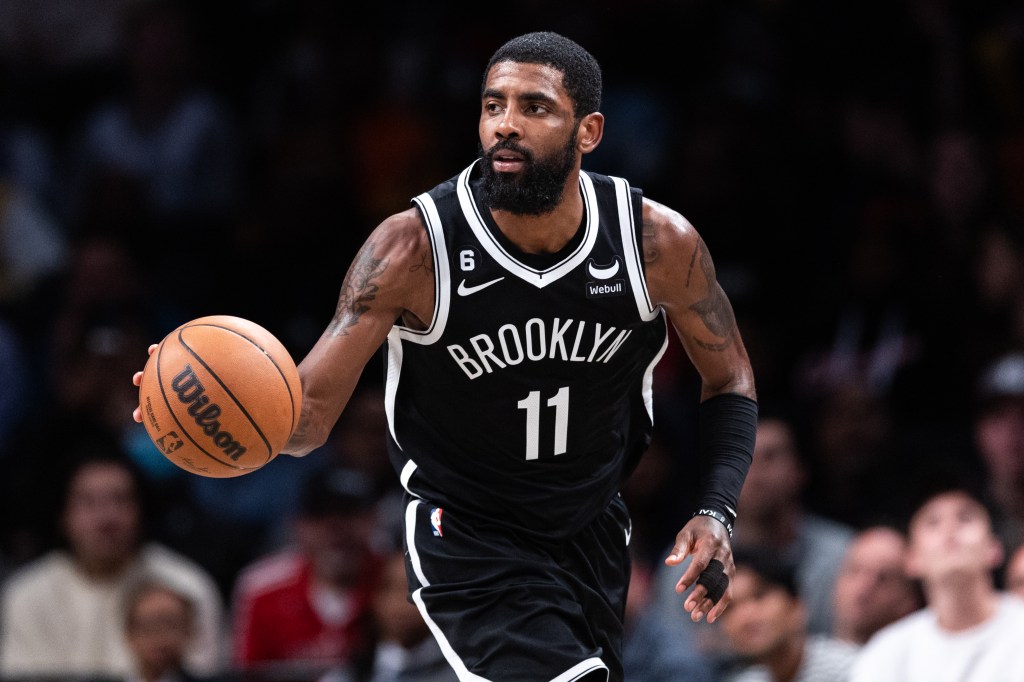 PORTLAND, Ore. — Sunday appears to be the day for Kyrie Irving’s return to the Nets, as the point guard’s ban appears to be finished.

“I think there’s been some nice synergy and movement towards his comeback, and it might happen as soon as the Memphis game,” Nets head coach Jacque Vaughn said Thursday, alluding to the Nets’ home game against the Grizzlies. So far, this has been the total progress.

Irving is anticipated to be allowed to play on Sunday, per a report by The Athletic, and multiple league sources close to the issue confirmed this to The Post.

The Nets’ 109-107 victory over the Trail Blazers on Thursday night signified not only the conclusion of their journey to the West Coast, but also the probable conclusion of Irving’s suspension.

After the Nets’ victory, Kevin Durant stated, “It’s obviously a tremendous win, and when you add someone that skilled and amazing at the game of basketball back to your team, we’re all looking forward to it.” “We’re playing a different style of basketball than when he last played, so I’m sure coach is looking forward to adding another offensive weapon, and he’s been putting up some beautiful plays for us, so I’m sure he’s got more stuff up his sleeve for Ky.”

The suspension of Kyrie Irving appears to be over.
Getty Images

It was the eighth consecutive game Irving missed after being suspended without pay on November 4 for anti-Semitic social media posts a week earlier. Irving refused to apologize for the posts until after he had been suspended, at which point the team assigned him many remedial assignments to do before he could be reinstated.

One source told The Athletic that Irving had completed these chores, going “above and beyond” what was requested. As of Thursday evening, Vaughn had not yet addressed the Irving situation with his players.

“I purposefully chose not to,” Vaughn stated. “I believed that there was some uncertainty. Therefore, when I have certainty, I hope to share it with the guys. So, the notion was, let’s just concentrate on the present.

“Ky will likely be required to address a section by himself. In addition, as the coach, I will have to deliver a speech to the team. And as soon as I have these answers, I will provide them to you.”

Although the Nets have not formally announced Irving’s return, it appears certain.

“That is what the reports indicate. I honestly do not know. I concentrate on a single day at a time, so perhaps Sunday it will be. Royce O’Nale stated that he was ecstatic to welcome everyone back and continue to build on our current success.

“It’s exciting for everyone,” added Durant. “We miss Ky, and we miss his presence on the court. Ideally, it will be soon. I haven’t spoken with him since we began this road trip a few days ago. However, we eagerly anticipate his return to the club, as he will provide a much-needed spark.”

Kevin Durant, on the right, stated that he has not communicated with Kyrie Irving throughout the road trip.
AP

Durant stated he has avoided the matter and has not discussed Irving’s suspension with Nets owner Joe Tsai or general manager Sean Marks.

Sincerely, I don’t know the specifics of anything going on, said Durant with a shrug. “Well, I suppose I should know since I’m a team member, but I’ve been entirely focused on the road trip. And once we return home, I am confident that everything will fall into place. However, we hope it’s soon. That is all I have to say.

Inside the Nets by Brian Lewis is only available on Sports+.

“Of course I wanted to know what was going on, but for the most part I just tried to handle what I could and let Kyrie and the Nets focus on what they needed to do for this to go away for Kyrie to return to the court.”

Irving averages 26.9 points, 5.1 assists, and 5.1 boards per game. His Nets teammates believe that Irving’s return will be a tremendous help. Durant anticipated that Irving’s greatest obstacle would be conditioning, and that he would overcome it quickly.

Nevertheless, after Thursday’s victory, the Nets are 5-3 without Irving. Vaughn must include Irving into the defensive, team-first philosophy he is attempting to establish.

Coach of the Portland Trail Blazers Chauncey Billups was astonished by the level of discord around the Nets.

“It’s regrettable…. They are enduring many hardships over there. Billups stated, “It seems like they’re always going through a lot over there.” “It usually seems overwhelming. Sincere to you, it makes me thankful to be with my team.”