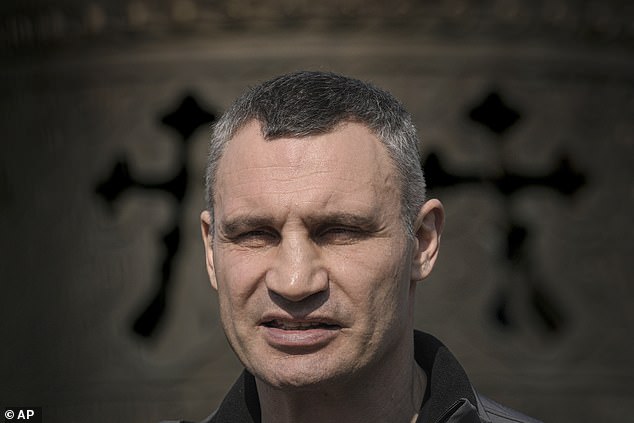 The mayor of Kyiv has pleaded with the West to send blankets and generators to help Ukraine survive the winter.

51-year-old Vital Klitschko stated that his country has been devastated by several attacks on power plants and that the system in the capital is working in ’emergency mode.’

Even though Mr. Klitschko has purchased generators and organized 1,000 mobile heating centers in Kyiv with the assistance of his team, anxieties continue to mount as the weather continues to become colder and Russia continues to assault vital infrastructure.

He stated yesterday via Telegram, ‘Due to a 20% to 50% electrical shortfall, the city’s energy distribution system is functioning in emergency mode.

In the same tweet, Klitschko confirmed allegations from the regional governor and Ukrenergo, the state energy utility, that rolling blackouts are imminent in Kyiv and the surrounding region.

He pounded his fists on the table while telling the Telegraph, “We are doing everything we can to preserve our people’s lives and defend them.”

But this winter will be a significant obstacle for us.

Due to Russian attacks on power stations and the broader grid over the past two weeks, Ukraine has struggled with outages and been concerned about the infrastructure surviving the winter.

It has severely damaged 40 percent of the energy infrastructure in Ukraine.

Mr. Klitshcko pounded his fists on the table as he told the Telegraph, “We are doing everything we can to preserve our people’s lives and defend them.”

However, this winter will be a formidable obstacle for us.

He stated that without blankets, people in the country would freeze to death.

Vitali had also stated on Ukrainian television that new air defense equipment had arrived in the city, expressing hope that it would assist in protecting the country’s energy infrastructure following weeks of targeted Russian attacks.

During a recent discussion, he stated, “The military has told me that new air defense equipment has arrived in the capital and that our skies will be safer.”

“We hope there will be no more attacks and provocations with kamikaze drones and missiles,” Klitschko said, referring to the Shahed exploding drones built in Iran that have been routinely sighted flying over Ukrainian cities.

Residents of Kyiv were informed that the region’s electrical supply will “sharply deteriorate” as a result of the strikes. Pictured: A power failure

Currently, electricity is one of the only ways for Ukrainians to heat their houses, as many reside in war-damaged structures that lack gas and windows. Pictured: A power interruption in Ukraine

According to Mr. Klitschko, the Russian president’s desire to claim a tiny triumph in his war prompted a change in strategy involving attacks on power stations and the broader grid.

General Sergei Surovikin, the newest leader of the Kremlin’s invasion, coordinated the drone and missile attacks.

Residents of Kyiv were informed that the region’s electrical supply will “sharply deteriorate” as a result of the strikes.

Natalia Zemko, 81, (left) converses with her daughter Lesya Zemko as she prepares tea in their kitchen on October 22 in Kyiv, Ukraine, during a power outage in the city center.

Lesya Zemko lights a candle in her flat during a power outage in the city center by using the gas burner.

Currently, electricity is one of the only ways for Ukrainians to heat their houses, as many reside in war-damaged structures that lack gas and windows.

And it has become evident that Putin is using the frigid weather as a new weapon in the expectation that everyone will be so cold that they will obey him.

In the next days, temperatures are anticipated to fall to as low as -20 degrees Celsius in several regions of Ukraine.

Mr. Klitschko stated that he is glad for the cooperation of Western nations, but noted that the aid has arrived too slowly.

After receiving a fire engine and two ambulances from a German philanthropic organisation, he made these statements.

KIEV, UKRAINE – 22 OCTOBER: Residents of Kyiv walk by a bakery that was forced to close because of a power outage in the city center.

Firefighters battle a blaze at energy infrastructure installations that were destroyed by Russian drone attacks.

As Russia’s assault on Ukraine continues, firefighters try to put out a fire at energy infrastructure installations destroyed by a Russian drone strike.

As winter approaches, the mayor of Kyiv stated that coats and blankets are vital for Ukrainians.

He entered politics after more than a decade as a heavyweight boxing superstar.

Along with his brother Wladimir, he is a prominent figure in Ukraine. And he has solicited support for the entire Ukraine with the aid of Wladimir.

Vitali was on a list of Russian assassination targets when the conflict in Ukraine first broke out.

However, he is unconcerned by the threat and has continued to advocate for support and tour the globe to acquire weapons for his nation.

He stated that the country will never receive enough military shipments and added that the war will end when enough is enough.

Vitali expressed regret in recommending that, if possible, Ukrainians avoid the nation during the winter due to the possibility of a humanitarian crisis.

He discussed the violence against people in other Ukrainian suburbs and stated that he feels Putin’s failure in the Donbas has prompted him to target civilians directly.

He stated that Putin is a liar and that the so-called conflict is in fact genocide.

Vitali has gained immense popularity by remaining in Ukraine.