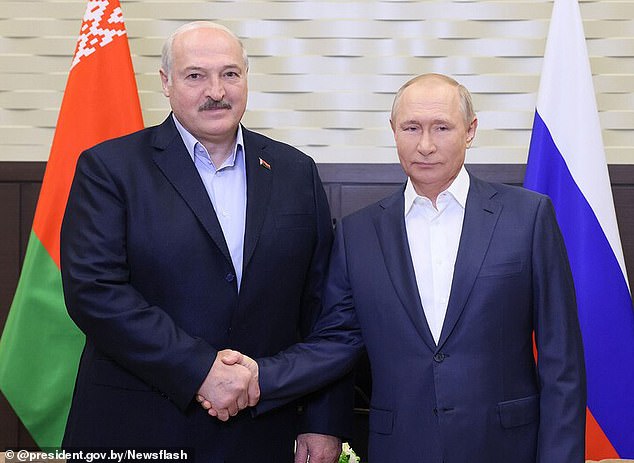 After Russian forces arrived “by the trainload” on Saturday, Russia has threatened to provide Belarusian jets nuclear missile capabilities.

According to the Telegraph, some analysts feel that Putin is trying to include Belarus, a nation that borders both Russia and Ukraine, in his conflict despite the Kremlin’s claims that the action was defensive in nature.

The decision to deploy troops into Belarus for the first time since March, according to the Russian defense ministry, was “dictated by the continued action in the territories bordering us.”

According to Belarusian dictator Alexander Lukashenko, immediately after the explosion on the Kerch Bridge, which connects the Russian-occupied Crimea to the Russian mainland, Belarus and Russia apparently started integrating some of their armed troops.

140 kilometers from Kyiv, the Belarusian border served as the starting point for Putin’s invasion of Ukraine in February.

The Russian foreign ministry said on Saturday that it will provide Belarusian Su-25 jets the capacity to carry nuclear-capable missiles but that Minsk, the capital of Belarus, had not yet received the missiles.

With an approximately 50,000-strong army, Belarus does not presently possess any nuclear weapons of its own, and defense analysts do not consider Belarus to have a strong military.

According to the most recent information from Moscow and Minsk, Ukraine is currently preparing to attack Belarus.

This occurs when Belarus demanded that its soldiers be evaluated for their “combat preparedness.”

This Monday, dictator Alexander Lukashenko said that he will send out a “joint military task force” with Moscow; Minsk also says that this action is “purely defensive.”

The chief of Lukashenko’s secret agency claimed he anticipated seeing a “turning point” in Vladimir Putin’s invasion in the next months when he announced the military readiness test.

The Security Council of the Republic of Belarus has ‘begun a test of the Armed Forces of Belarus in accordance with instructions of the head of state,’ according to a report from the Belarusian news agency BelTA on Tuesday, echoing Russian rhetoric prior to the invasion of Ukraine, in which Russia claimed it was conducting military drills on the border.

The agency noted that units will practice “switching to combat-ready state” while engaging in marching drills, deployment drills, and combat training missions. “The test is comprehensive and covers the most important matters concerning the readiness of army units for carrying out their missions,” the agency reported.

The Belarusian army tested its mobilization processes and called up reservists as part of the combat readiness test.

According to estimates, up to 60 T-72 tanks were removed from storage in Belarus and transported to Belgorod, which is close to the Ukrainian border.

However, a Belarusian NGO downplayed worries of a fresh Russian ground attack coming from Minsk on Kyiv. According to the report, the freshly mobilized Russian forces were dispersed to several sites around Belarus without tanks or armored personnel carriers.

According to the Belarusian Hajun Project, which keeps track of military action, “it may be inferred that the decision to deploy a’regional grouping of forces’ is a cover for training mobilized people of the Russian Federation in Belarus.”

The European Commission urged Belarus to desist from any participation in Russia’s “brutal illegal endeavour,” which violates the United Nations Charter and international law, in response to the newest alliance that has outraged Europe.

The G7 leaders advised Minsk to “stop aiding” Vladimir Putin’s war in Ukraine and stated that Lukashenko’s decision to deploy combined troops with Russia is a fresh example of collaboration with Moscow.

They urged the “Lukashenko government to fully adhere by its commitments under international law,” saying in a statement that “the declaration of a combined military group with Russia marks the most recent indication of the Belarusian dictatorship’s collaboration with Russia.”

Mr. Lukashenko has been the president of Russia’s steadfast supporter and has publicly backed his war in Ukraine.

However, he has publicly expressed his displeasure that the battle has stretched on for too long and has so far refrained from sending in Belarusian military.

In contrast to Russia, Belarus has far lower support for the invasion of Ukraine. Additionally precarious is Mr. Lukashenko’s domestic support.

Analysts have cautioned that Mr. Lukansheko would heed Putin’s orders to enter the conflict, however.

According to Kenneth Roth, the former executive director of Human Rights Watch in New York, “Joining the war against Ukraine would generate further outrage against his deeply unpopular government but his most important, and only significant, supporter, Putin, wants him to back this failing invasion.”

Lukashenko said that Kyiv clearly poses a danger to his nation in a speech on Monday.

The comments made by Lukashenko, who has been in charge of Belarus since 1994, suggest the presence of a joint army made up of Russia and Belarus in the north of Ukraine.

Lukashenko said at a security briefing that “attacks on the territory of Belarus are not only being discussed in Ukraine today; they are actually being plotted.”

To entice us there, their masters are pressuring them to declare war on Belarus.

“We have spent decades getting ready for this.” If action is required, we will take it,’ Lukashenko said, adding that he had discussed the matter with Putin at a meeting in St. Petersburg.

After what seems to have been an assault on Russia’s road and rail crossing to Crimea early on Saturday, Lukashenko said he and Putin had agreed to send out a regional military force and had begun to gather troops two days before.

He said, without providing more information, that Belarus had been informed through unofficial means that Ukraine was planning to build “Crimean Bridge 2”.

My response was straightforward: “Tell Ukraine’s president and the other nutcases that if they touch even a single inch of our land, the Crimean Bridge would appear like a stroll in the park to them.”