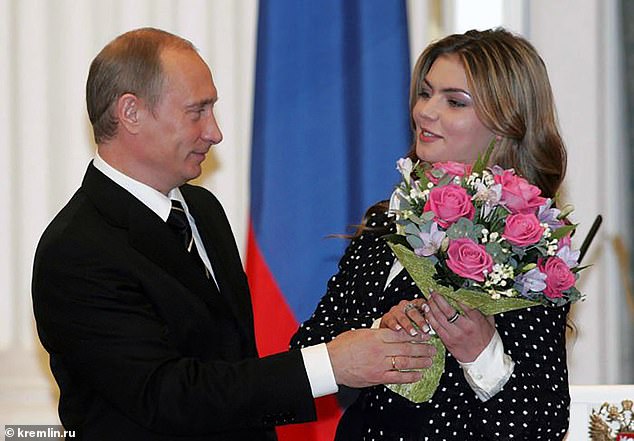 Today, it was reported that Vladimir Putin is preparing to make crucial choices regarding the launch of a tactical nuclear strike from a bunker far from Moscow.

Putin, who will turn 70 on Friday, allegedly warned his closest family members, including his 40-year-old gymnast lover Alina Kabaeva, of the likelihood of a fast evacuation.

According to the General SVR channel, Putin deems the bunker to be’safe’ against an attack by the West, and key personnel from his security apparatus and government would be sent there.

The anti-Kremlin outlet, which claims to have inside information from Putin’s inner circle, has long asserted that he suffers from severe health issues, but provides no evidence to support its allegations.

Putin is believed to have multiple bunkers in Siberia, one of which is connected to the large new liquid case terminal at Sabetta on the Yamal peninsula, and another of which is located in the Altai Mountains.

Today’s news from the station stated, “Relatives and friends of the heads of state will be transported to the bunker beforehand.”

Vladimir Putin is rumored to be in a nuclear bunker remote from Moscow, making plans to remove specific individuals in the event of a nuclear conflict with NATO.

Putin, 69, allegedly informed his closest family members, including his gymnast lover Alina Kabaeva, 40, of the possibility of a sudden departure.

As his invasion collapses and his army is routed by the Ukrainian army, Putin is rumored to be considering the use of tactical nuclear weapons in Ukraine.

‘Alina Kabaeva, [the couple’s] children, her two older daughters, their children, and their cohabitants were notified of the prospect of an evacuation.

However, not everyone in the Russian leadership was so fortunate.

In the case of a nuclear attack, Putin ordered the evacuation of the ‘bare minimum’ of Russian officials.

This would comprise Mikhail Mishustin, the prime minister, and Vyacheslav Volodin, the speaker of the parliament.

It would include the prosecutor general, the leadership of the Security Council – excluding former president Dmitry Medvedev – as well as top officials from his presidential administration and three security and intelligence services, the FSB, FSO, and SVR, along with their families.

His defense ministry maintains various bunkers, including some in the Ural Mountains.

His eldest daughter Maria Vorontsova, 36, a geneticist, and Katerina Tikhonova, 35, a high-kicking ‘rock’n’roll’ dancer-turned-mathematician, along with their wives and children, are included in the alleged evacuation.

Luiza Rozova, also known as Elizaveta Krivonogikh, 19, an unacknowledged ‘love child’ of Vladimir Putin, is reportedly not invited to the bunker, nor is a mysterious son from a previous connection.

Rozova is the daughter of cleaner-turned-multimillionaire Svetlana Krivonogikh, 47, who is now a part-owner of a major Russian bank and one of the wealthiest women in the country with an estimated £74 million financial and real estate empire.

Svetlana Krivonogikh, 47, a former cleaner-turned-multimillionaire who is now part-owner of a major Russian bank and one of the country’s wealthiest women with an estimated £74 million financial and property fortune, is rumored to be Putin’s lovechild’s mother.

It was reported that neither Luiza Rozova, also known as Elizaveta Krivonogikh, nor her 19-year-old son from a prior relationship were invited to the bunker.

Supposedly, no senators are on the list of bunker residents.

Putin didn’t even need his own children from his mistresses – a girl and a boy who will not be evacuated.

Several friends of the president and their families, as well as a large number of the bunker’s servants, will also be evacuated.

At the beginning of the war, rumors circulated that Putin had gone to a bunker in Siberia.

It is rumored that one unique bunker prepared for him to rule Russia in the case of Armageddon can hold up to 100,000 people.

In addition to a location near a big Gazprom complex in the far north of Russia, there are rumors of a high-tech bunker buried beneath a large dacha in the Altai Mountains.

His office stated that he met with culture minister Olga Lyubimova in the Kremlin on Monday, although the station reported that the meeting took place earlier.

According to the report, the president instead met with shamans who performed a ‘ritual’ for Putin involving a ‘burning bird’ that may represent ‘winning and death,’ leaving the interpretation ‘to the president’s tortured imagination.

The illustration depicts a Russian Topol M intercontinental ballistic missile launcher. Putin has numerous choices available to him if he decides to conduct a nuclear attack.

As well as other members of the Russian elite, his defense minister Sergei Shoigu is known to have an interest in shamans, who are popular in his home Tuva area.

Putin is poised to make crucial decisions on the launch of a tactical nuclear strike from a bunker far from Moscow, where he believes he is safe, despite the president’s serious consideration of shamanic ravings.

The station asserted, ‘Putin should be taken to a psychiatric hospital for mandatory therapy under rigorous supervision, but everyone seems eager to participate in the experiment ‘what happens if you give an idiot the chance to ruin the world?’

The nuclear mushroom-shaped cloud that hovered above Las Vegas terrified the city’s citizens to death.

“May God show these individuals that it’s worthwhile to stop…otherwise, sooner or later, these mushrooms will spread everywhere in the world…”

Its assertions are unverifiable, but it was among the first to report Putin’s new mobilization tactics in advance.

It is allegedly written by an exiled lieutenant-general of the Kremlin identified by the alias Viktor Mikhailovich.

The channel has asserted that the Kremlin is attempting to prohibit it but has thus far been unsuccessful.