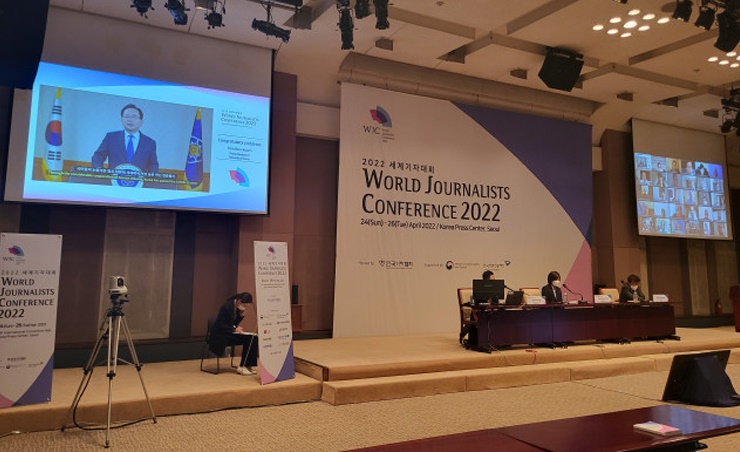 Korea’s Prime Minister Boo-kyum Kim has called for a new history for journalism and humankind that lights up the way to overcome all challenges that may come under the Great Transformation of Civilization.

In a message to journalists from 34 countries taking part in the World Journalist Conference (WJC2022), the prime minister said that the people’s distrust of journalism that kept growing due to fake news, especially during the COVID pandemic, should never happen again.

“Preposterous claims or provocative false descriptions about vaccines were reported excitedly to increase online hits, and induced confusion to make the public uneasy,” he said.

“We all need to think about what is the right conduct for the future of our community, and what role should journalism play. I hope all the journalists at this conference will make a way to create a ‘healthy community’. We need your knowledge to be collected with the spirit of solidarity and cooperation. With that power, let’s make a new history for journalism and humankind.”

In his remarks, the president of the Journalists Association of Korea Kim Dong-hoon said that journalists who share commonalities even if their countries, genders, skin colors, and ideologies are different, are working hard for freedom and peace and disseminating the truth with a warm heart and cool reasoning.

“As distrust in journalism has accelerated since COVID-19, I anticipate the space given to listen to the efforts made to eradicate ‘fake news’ in each country so that we may jointly introduce and supplement them to achieve respectable journalism,” he said.

The World Journalists Conference (WJC2022), organized by the Journalists Association of Korea (JAK) is held on April 25-26 in a hybrid format in Seoul.

Over two days, journalists from various countries are highlighting the significance of fighting disinformation and the need to strengthen support for fact checking and exchanging experiences.

Those able to attend physically and those who will participate virtually from as far as Colombia and Papua New Guinea are delivering speeches, exchanging experiences, discussing best practices and reviewing the latest in fact checking.

On the first day, 30 speakers from 25 countries are taking the main stage physically or online bringing in with them various experiences and voicing diverse views as they foster discussions on fact checking.

On the second day of the annual conference that has been held since 2013 without interruption, journalists will give speeches on the theme of “A Society Changed by Journalists.”

The 23 journalists, from 19 countries, will highlight the role of journalists and how their work has influenced their societies and changed behaviors.

Speakers on both days will answer questions and comments at the end of the sessions.

Sang-ki Lee, a former president of Asia Journalists Association (AJA), said that the role of AJA, with its vast network of journalists across Asia and beyond, will become more important in cross-checking claims and verifying reports.

Ivan Lim, editor at Environment Communicators of Singapore, will highlight the role of journalists during the critical times of the COVID pandemic.

“As nations scramble to understand what is happening, and to overcome the economic setbacks and vaccines, the response of the mass media influences society and makes the difference between success and failure,” he said.

Kyrgyzstan’s Kabar News Agency Director General Kuban Taabaldiev said that “as people stepped into the so-called ‘Internet era’, it became obvious that information flows had the ability to rise above politics.”

“More stories began to be fabricated, with their authors spreading their versions of events that were beneficial to them,” he said.

“There is no common understanding of the rules that should internationally govern the Internet,” the Karachi-based veteran journalist said.

“Hence self-regulation appears to be a solution to increase online accountability.”

Media Advisor Habib Toumi said that journalists and fact checkers must join hands to write together a more sensible future for the world.

“There is an urgent need to come together to fight the tsunami of misinformation, disinformation, manipulation, and fabrication sweeping across the world,” he said.

“If we do not fight disinformation and its ominous threats, more lives will be lost, more communities will be targeted, races will continue to be abused. We need to minimize disinformation before it is too late. We have no other option.”

The World Journalists Conference is an annual event that invites overseas journalists to discuss the role of the media in contributing to the development of journalism and the communities.

Since its launch in 2013, the World Journalists Conference has been an outstanding networking platform for journalists from diverse backgrounds.

The Journalists Association of Korea, established in 1964, has more than 10,000 members from hundreds of media companies.

The association has been endeavoring to build on the achievements accomplished for almost six decades by its founders and members.