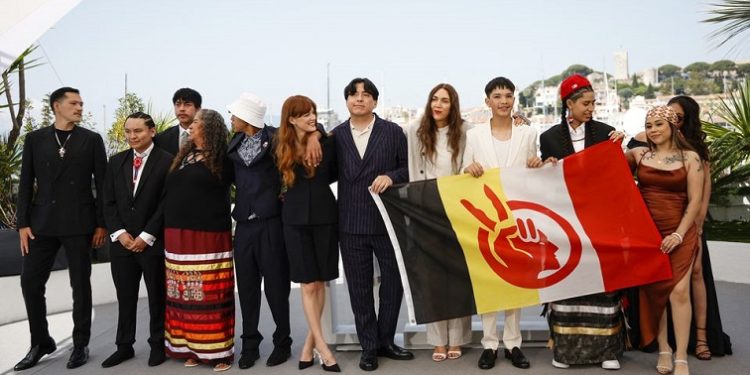 In “Broker,” which opened Thursday at the Cannes Film Festival in southern France, acclaimed Japanese filmmaker Hirokazu Kore-eda worked with an all-star Korean ensemble to tell the story of three thieves and a kid.

Song Kang-ho, well known for his part in the Oscar-nominated black comedy “Parasite,” portrays one of a pair of robbers who take an abandoned newborn from a church’s “baby box” with the intention of selling it on the black market.

The scheme, however, hits a snag when the baby’s mother comes to claim the kid and ends up joining the couple on a road trip to locate appropriate parents in the hopes of getting her portion of the money.

Kore-eda said the project originated in 2016 when a group of Korean actors he admired, including Song, said they wanted to make a movie together.

The unlikely trio ultimately find a family in each other – a running theme in the work of Kore-eda, who won the Cannes Palme d’Or in 2018 with “Shoplifters” and the jury prize in 2013 with “Like Father, Like Son”.

“The road trip was about the different characters searching for what they had lost and what they were missing… As they surround this baby, Woo-sung, through their journey they all start thinking about would be best for the baby’s happiness,” Kore-eda said in an interview with Reuters.

Casting the baby proved challenging because the pandemic forced him to rely on screenshots, Kore-eda said. But the infant actor provided spontaneous moments, such as by crying just as Song’s character Sang-hyun was about to sell him to a couple.

It seemed that the language barrier was broken not only between Japanese and Korean, but also with baby talk.

“I think it was the last scene, when the baby is looking at me, I had the impression he was saying, ‘Well, listen let’s stop shooting. We’ve done enough takes, let’s stop.’”, Song said.