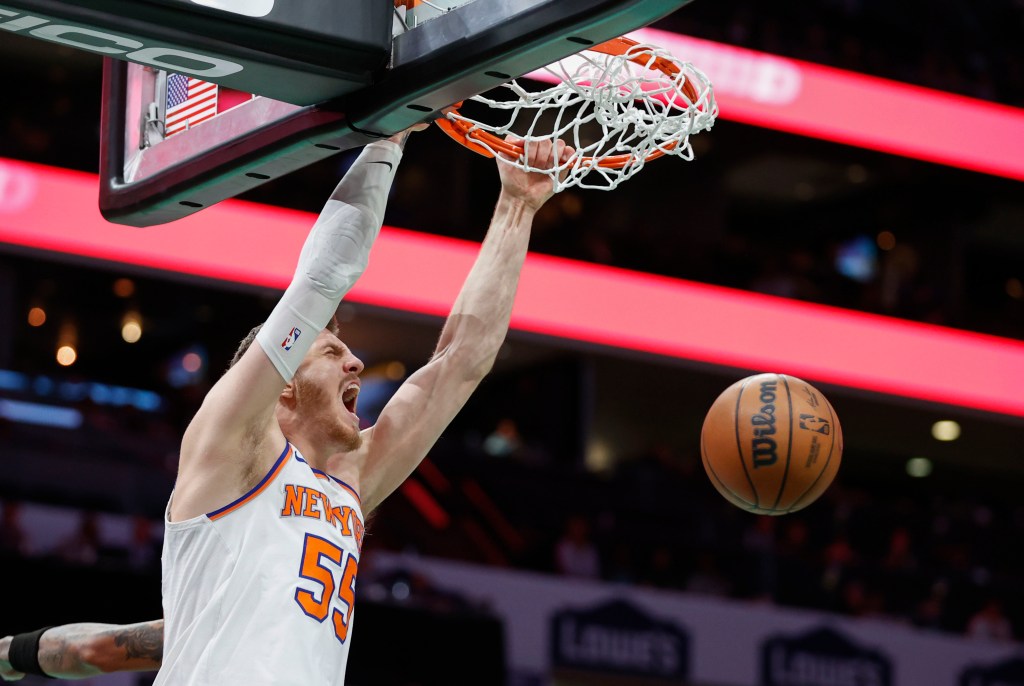 Amid talk of using RJ Barrett as a small-ball power forward, the Knicks’ coach went with Jericho Sims and Isaiah Hartenstein in a two-big lineup with the second unit as the Knicks hammered the Hornets, 121-102, at Spectrum Center on Friday.

“The combined size of Isaiah and Jericho appealed to me,” said Thibodeau.

Toppin suffered a non-displaced fracture in his right fibula during the second quarter of the Knicks’ win over the Hawks at the Garden on Wednesday. The team announced Thursday that the 24-year-old reserve player and fan favorite will be re-evaluated in two to three weeks.

The Knicks were outscored by five in the first five minutes when Sims and Hartenstein shared the court.

But in the second half, they outscored the Hornets by seven. Hartenstein finished his 18-minute performance with 11 points, eight rebounds, two steals, and two assists. Additionally, he made his first 3-pointer since November 18, spanning ten games. In 12 minutes, Sims had two points and two rebounds. He was no longer in the rotation.

Isaiah Hartenstein, who scored 11 points, slams one home during the Knicks’ 121-102 win over the Hornets.
AP

Quentin Grimes has already earned Thibodeau’s trust, to the point that the second-year guard convinced Thibodeau to use a challenge on a foul called against Grimes late in the third quarter. It would’ve been his fourth foul, but the Knicks won the challenge.

“It goes a long way having a coach trusting me like that, just to challenge something in the third quarter knowing I have three fouls, hoping I don’t pick up a fourth,” Grimes said. “I feel like it’s going to go a long way, not only right now, but later on in the season.”

Barrett has tried to be there for Cam Reddish, his former Duke teammate who has been relegated to bench duty after playing a significant role early on.

“We definitely talk all the time, talk every day,” Barrett said. “That’s my guy, my brother. So I’m keeping his spirits up.”

Immanuel Quickley hopes the trade rumors that have involved him don’t come to fruition.

Quickley scored 11 points and added four assists off the bench.

With a win Friday night, the Knicks joined the Bucks and the Celtics as the only teams in the Eastern Conference over .500 on the road. They have won five of their last seven games away from home to improve to 7-6 on the road.

»Knicks’ decision to go big with their second unit is profitable«