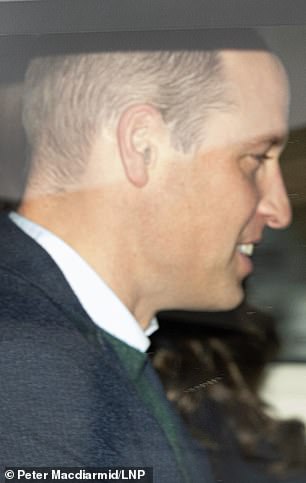 A grinning Prince William brushed off his brother’s insults as he and Kate left Windsor today.

The Prince of Wales laughed with his wife and appeared at ease as the couple returned to business after Prince Harry’s public relations campaign to promote his memoirs appeared to have concluded.

William has been the target of assaults by his younger sibling, who claimed in the book Spare that the heir to the throne assaulted him in a fiery argument when he referred to Meghan as “difficult,” “rude,” and “abrasive.”

And in talks with US and UK broadcasters, Harry continued to criticize his older brother for his role in Megxit, which reportedly left William fuming.

As they exited the grounds of Windsor Castle, Charles conversed cheerfully with the Princess of Wales, displaying no indication of his fury.

And around the same time, King Charles made his first public appearance since the publication of Prince Harry’s explosive memoir, which exposed the depth of the schism among the Royal Family.

Charles is in Aberdeenshire this morning to visit a foodbank and local charities, following more than a week of criticism from his son during the publicity blitz for his new book.

A grinning Prince William brushed off his brother’s insults as he and Kate left Windsor today.

This morning, the Princess of Wales was also observed conversing pleasantly as she left her residence.

His first engagement since the publication of the book is a visit to the Aboyne and Mid Deeside Community Shed.

The monarch’s visit to Scotland is his first public appearance since the Tuesday release of Prince Harry’s controversial autobiography Spare, the fastest-selling nonfiction book in history.

Due to allegations that he was attacked by his brother the Prince of Wales, that he murdered 25 Taliban members during the Afghanistan war, and that he used illegal narcotics, the Duke of Sussex’s statements have dominated headlines for days.

During his Scottish engagement, the King is due to be greeted by Lord Lieutenant Sandy Manson and given a tour of the ground floor of the Aboyne and Mid-Deeside Community Shed.

During his visit to the home of the Aboyne Men’s Shed workshop, Charles will observe wood and stone carving in action and meet the men who meet there every week.

He is also due to meet with representatives of various charitable organizations and volunteer organizations, including the Aberdeenshire North Foodbank in Inverurie, Gordon Rural Action, and Young at Heart Deeside.

Experts predict that Spare will be one of the most popular novels of the year due of its revelations about royal life.

According to the publisher, the English-language edition of Spare sold more than 1,400,000 copies in the United States, Canada, and the United Kingdom on the 10th of January, when it first touched bookstore shelves.

Gina Centrello, president and publisher of the Random House Group, said on the record-breaking sales, “While many books by public figures can be fairly classified as “celebrity memoirs,” Spare is not.”

‘Vulnerable and emotional, courageous and intimate, Spare is the story of someone we may have believed we already knew, but through his own words we can now completely comprehend Prince Harry.

“Based on these astounding first-day sales, it’s clear that readers agree that Spare is a book that demands to be read, and it’s a book we’re proud to publish.”

Charles will fly to Aberdeenshire this morning to visit a foodbank and local charity, following more than a week of criticism from his son during a publicity push for his new book (pictured on The Late Show with Stephen Colbert on Tuesday)

The King will make his first public appearance since the publication of Prince Harry’s explosive memoir, which exposed the extent of the schism within the Royal Family, today.

According to the publisher, the English language edition of Spare sold more than 1.4 million copies in the United States, Canada, and the United Kingdom on its first day on bookshop shelves on January 10.

Overnight, it was rumored that Harry will not be invited to his father’s coronation in May due to the onslaught of vitriol directed at his family in his new book.

The Sun said that senior royals are hesitant to spend time with him at the historical occasion for fear that their chats may “end up in the paperback edition” of his memoir.

This week, the Duke of Sussex mounted a charm offensive by mocking royal procedure on US talkback shows to promote his best-selling memoir, Spare.

This week, a source revealed, “The family expects Harry and Meghan to find an excuse not to attend.”