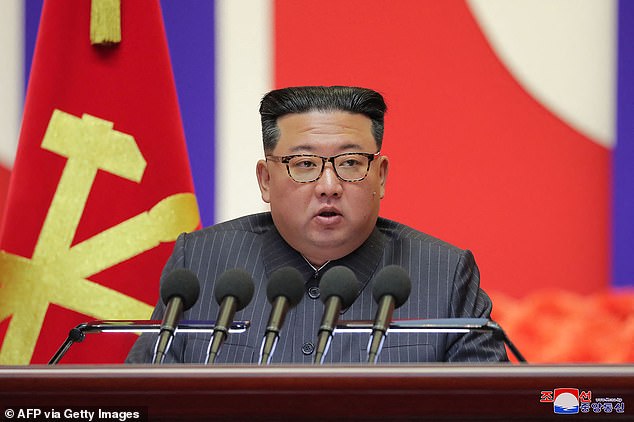 According to his sister, Kim Jong-un had a “high fever” and a “severe illness” during North Korea’s Covid epidemic.

In May, North Korea reported its first instance of the Covid virus in the public eye, prompting a statewide lockdown.

The dictator claimed a “miracle” triumph against the illness in his speech on Wednesday, and his sister pledged retaliation against their southern neighbours for infecting her brother and an estimated 4.8 million inhabitants of North Korea.

She declared: “We will react naturally by not only eliminating the virus but also exterminating the south Korean government b*****ds if the enemy continue to engage in risky acts that might spread the illness into our nation.”

Despite the government maintaining for two years that not a single case was discovered until their breakout this year, leading to a statewide lockdown, her remark was the first indication that Kim may have caught Covid.

As she talked about her brother’s alleged illness, North Korean official television showed several audience members sobbing in front of hundreds of people.

They then clapped and whooped as she vowed to get revenge on South Korea, calling the virus a “hysteric farce” designed specifically to inflame tensions.

She said that her brother had indications of a fever and thanked him for his “energetic and careful supervision” for working a “epoch-making miracle” in the battle against COVID-19.

Leaflets and other filthy materials are continually being thrown into our land by puppets from South Korea. We need to fight back hard,” she stated.

We have already thought of many tactics for retaliation, but we must use a lethal retaliatory response.

Kim Yo Jong didn’t provide any further context for his allusion to Kim Jong Un’s sickness.

According to experts, North Korea altered the severity of the epidemic to support Kim in keeping complete control of the nation despite escalating economic problems.

They think Kim’s winning speech indicates his want to shift his focus to other matters, but they are worried his sister’s comments may be provocative.

North Korea’s “very insulting and threatening words,” which were based on “ridiculous assertions,” were strongly regretted, according to a statement from South Korea’s Unification Ministry, which oversees inter-Korean relations.

With a population of 26 million, North Korea has recorded around 4.8 million “fever cases” since admitting an omicron virus epidemic in May, but has only identified a small percentage of these as COVID-19.

The epidemic, according to the report, has slowed down for weeks and just 74 individuals have perished.

“Since we started operating the maximum emergency anti-epidemic campaign (in May), daily fever cases that reached hundreds of thousands during the outbreak’s early days were reduced to below 90,000 a month later and continuously decreased, and not a single case of fever suspected to be linked to the evil virus has been reported since July 29,” Kim said in his speech.

“Our success in stemming the spread of the illness in such a short period of time, recovering public health safety, and making our country a clean virus-free zone again is an amazing miracle that would be recorded in the world’s history of public health,” the country said, not having given a single vaccine shot.

Leif-Eric Easley, a professor of international studies at Ewha Womans University in Seoul, said that for Kim to declare victory over COVID-19 suggests that he wants to move on to other priorities, such as boosting a broken and heavily sanctioned economy further damaged by pandemic border closures, or carrying out a nuclear test.

North Korea has conducted a barrage of weapons tests this year, including its first displays of intercontinental ballistic missiles since 2017. According to South Korean and American authorities, the country may be preparing for its first nuclear test in five years.

According to analysts, Kim’s aggressive testing activity highlights his simultaneous intentions to strengthen his arsenal and exert pressure on the Biden administration about long-stagnant discussions aimed at using its nukes to leverage much-needed sanctions relief and security concessions.

The South Korean military is keeping a solid state of readiness and is ready for “different possibilities” of North Korean provocations, according to Kim Jun-rak, a spokeswoman for the Joint Chiefs of Staff of South Korea.

According to Easley, Kim Yo Jong’s bellicose language raises concerns since it suggests she would want to blame any Covid revival on the South and is also seeking to legitimise North Korea’s upcoming military aggression.

A dubious and unfounded assertion made by North Korea in July that its Covid epidemic started in persons who had touch with materials carried by balloons launched from South Korea looked to be an effort to blame its competitor.

Since years, activists have used balloons to cross the border and disseminate hundreds of thousands of propaganda flyers that are critical of Kim.

North Korea has often voiced its anger at the activists as well as the authorities of South Korea for failing to stop them.

Experts agree that the propagation of the coronavirus from surfaces is very unlikely since it is disseminated by close contacts inhaling airborne droplets.

The epidemic in North Korea is said to have begun when the nation temporarily allowed freight trade over its border with China in January and to have become worse after a military parade and other significant events in Pyongyang in April.

To stop the illness from spreading, Kim halted travel across counties and cities in May. But he also emphasised that his financial objectives must be achieved, which caused sizable crowds to keep assembling at commercial, industrial, and construction sites.

Invoking the international spread of novel coronavirus strains and monkeypox, Kim urged the country to maintain vigilant and effective border controls while calling for a relaxation of preventative measures.