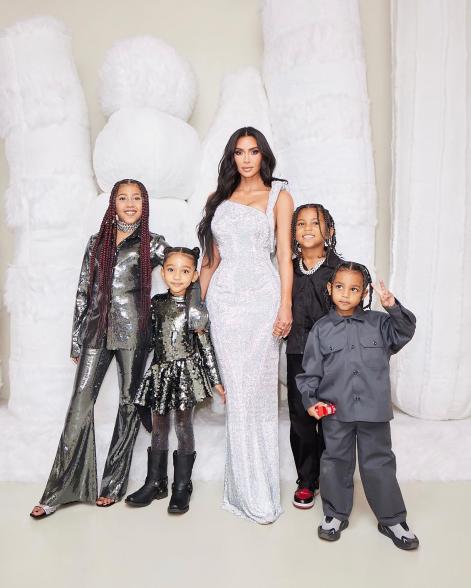 Kim Kardashian delicately refuted allegations that she altered a photograph of her with her mother and sisters during their Christmas Eve family gathering.

The reality star posted a group photo of herself, Kris Jenner, Khloé Kardashian, Kourtney Kardashian, Kylie Jenner, and Kendall Jenner in an Instagram slideshow on Monday, despite the fact that many social media users doubted they posed for the photo.

“Why however?” one participant wrote. “Why is it so difficult to snap a picture together? Isn’t it more difficult to photoshop each individual? This family is inexplicable.”

Someone else added, “You all seem photoshopped. Especially u kim. From a different image.”

Kim Kardashian demonstrated that she posed with her sisters and their mother at the Christmas Eve party.

Wednesday, Kim, 42, set the record straight by reposting a video of her family members posing at their yearly celebration on her Story.

The designer of Skims did not respond to criticism of the photo’s purported airbrushing.

In the comments area of Instagram, one user asserted, “Every single jawline is photo-shopped, as if their heads were sliced and pasted on.”

In the meantime, another critic requested to see the uncut version

Kim and her siblings have been repeatedly accused over the years of altering their photographs.

In April, the beauty mogul responded to claims that she removed her belly button from a poolside photo by calling them “stupid.”.

“C’mon, guys….Seriously!” She wrote at the time on Instagram Stories. Claiming I removed my belly button with Photoshop?

After making light of her supposed “belly button anxieties,” the businesswoman said, “Why don’t you visit skims.com and cover your sagging belly button with a beautiful pair of high-waisted underwear, just like I did? You’re very welcome!

In the same month, Khloé confessed to Photoshopping her daughter True into Disneyland images with her cousin Chicago.

The Good American co-creator, 38, tweeted, “Welllppp I f–ked this one up.” Regardless…. let’s concentrate on something else.