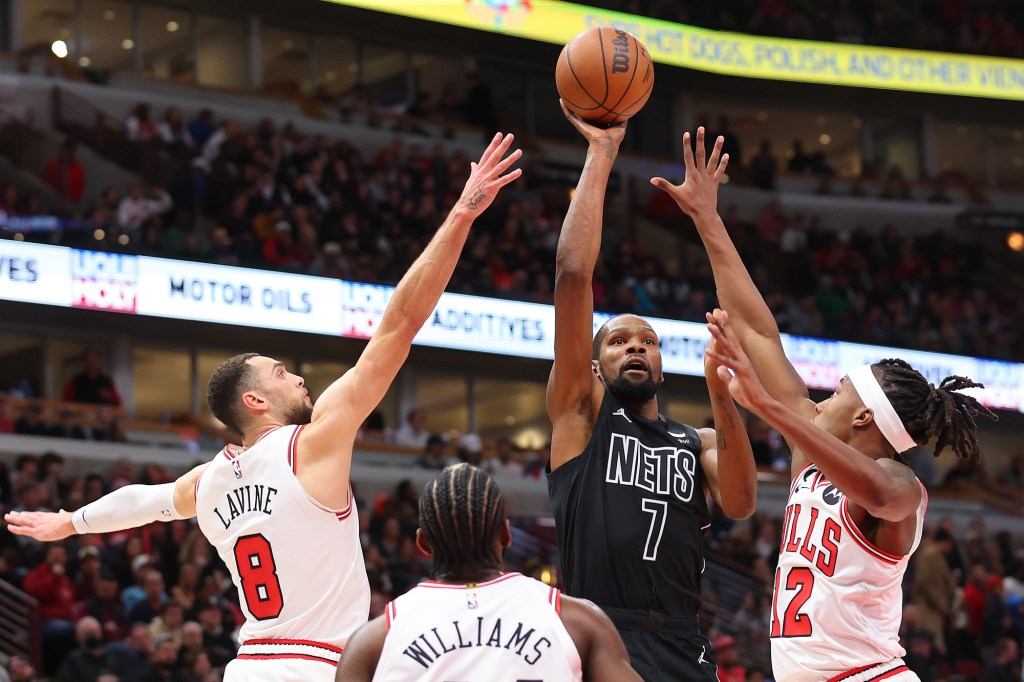 NEW ORLEANS — Thursday’s release of the first round of NBA All-Star voting placed Kevin Durant atop the Eastern Conference.

It was the latest indication that the superstar is not only at the height of his abilities despite being 34 years old, but has also spent the past month propelling the Nets near the top of the standings and himself into the MVP competition.

Brooklyn (25-13) enters Friday’s matchup against the Pelicans on the heels of its first defeat in a month, a setback at Chicago. Despite the Nets losing their league-best 12-game winning streak, Durant was outstanding with 44 points on 15 of 22 shooting. He’s been on fire leading up to their matchup with the Pelicans.

The Nets enter the Smoothie King Center having won 16 of their last 18 games, and Durant has averaged 30.80 points during this stretch with shooting splits of 61.4/41.9/96.20. And he has not only appeared dominant but also content, which is maybe even more significant for Brooklyn given Durant’s offseason trade desire.

This summer’s controversy may have slowed his MVP campaign, but it hasn’t halted it.

Kevin Durant (7) shoots over Chicago Bulls’ Zach LaVine (8) and Ayo Dosunmu (12) during the first half on January 4, 2023 at United Center in Chicago.
Getty Pictures

Former Nets deputy general manager and current ESPN insider Bobby Marks told The Post, “Durant has been phenomenal.” “There are so many possibilities for MVP. I do not have a vote, but even if I did, I would still vote for Kevin Durant for Most Valuable Player.

“[It] would not prevent me from voting for Kyrie Irving for All-NBA if he continues to play at a high level. Especially with regard to the trade demand, I believe it is necessary to separate these two factors somewhat. Kyrie’s circumstance is unique compared to everyone else.”

This is supported not only by the early fan vote, but also by practically every other metric.

BetMGM gives Durant the fifth-best odds to win the award again, placing him behind Dallas’ Luka Doncic, Milwaukee’s Giannis Antetokounmpo, Denver’s Nikola Jokic, and Boston’s Jayson Tatum. When Steve Nash was fired as coach on November 1 and Jacque Vaughn took over a struggling 2-5 club, he was eighth.

Irving, the Eastern Conference guard with the most votes, inquired, “What is 34 in NBA years?” What does 34 mean?

Durant has discovered a way to continue ascending at an age when players often begin to decline, and when power forwards typically fall off a steep cliff.

Gregg Popovich, who coached Kevin Durant and Team USA to Olympic gold in Tokyo, stated, “If he gets better, that would be fantastic for him, but I don’t know how you can get much better.” “He is performing admirably. He enjoys the game as much as anyone has ever enjoyed it. He desires only to play.”

Durant’s ability to remain focused despite the tumult around the Nets is a result of his passion for basketball. And despite his frequent assertions that his fans loathe him, he must have at least a couple million supporters. His 3,118,545 votes lead the Eastern Conference and are second only to LeBron James’ 3,168,694 in the Western Conference.

“I believe [Irving] has performed as an All-Star. I would be surprised if the coaches did not vote him in. Marks had told The Post shortly before the first fan vote was announced, “I don’t know where he gets for the fan vote, but somehow he’ll get voted in by the fans or the coaches.” I believe that he, along with Jacque and Kevin, is a major factor in the team’s success due to how he’s playing.

Durant, whose worth to the Nets has never been clearer, is the single most important factor.