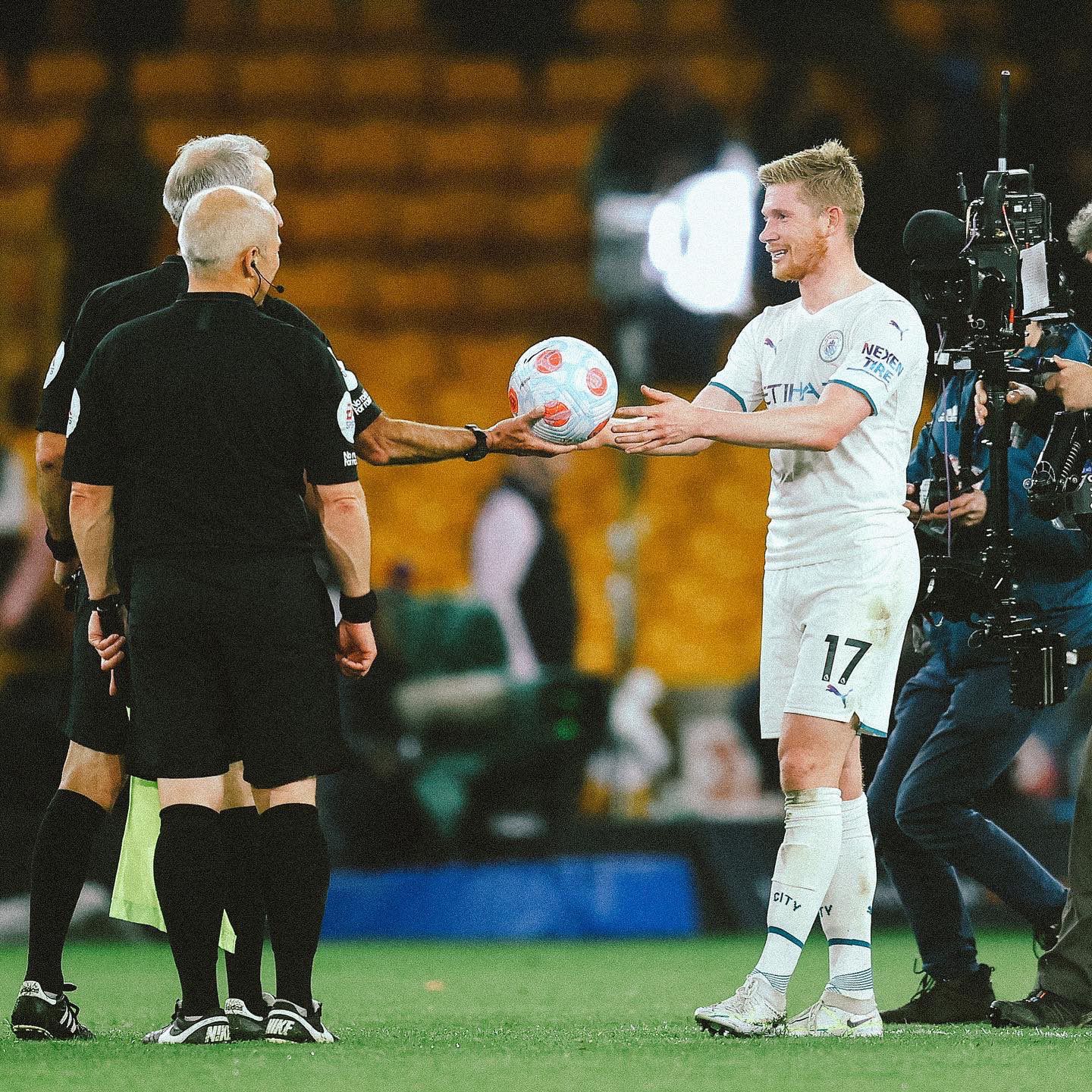 Pep Guardiola described Kevin De Bruyne’s form as “beyond perfect” after the Belgian scored four goals in a 5-1 thrashing of Wolves that took Manchester City another step closer to retaining the Premier League.

Guardiola’s men move three points clear of Liverpool with two games to play and boosted their goal difference to seven superior to the Reds.

Manchester City need just four points from Sunday’s trip to West Ham and the visit of Aston Villa on the final day of the season to be crowned champions for the fourth time in five years.

And with De Bruyne on this form, they will take some stopping as the Belgian produced his brilliant best to blow away the hosts with a hat-trick inside 24 minutes.

“The second part of the league was beyond perfect,” said Guardiola of De Bruyne’s form.

“He has been decisive scoring goals, this is what makes him the greatest. Scoring four goals in the decisive part of the league right now is so important.”

Manchester City broke the news on Tuesday that they have beaten Europe’s top clubs to the signature of Erling Haaland.

However, even the Norwegian goalscoring phenomenon would struggle to match the range of finishes off both feet dispatched by De Bruyne.

In keeping with their form in recent weeks, City looked to have dispelled any early nerves by scoring first as Bernardo Silva teed up De Bruyne to fire first time across Jose Sa.

The visitors, though, were without three key defenders in Kyle Walker, John Stones and Ruben Dias through injury and it showed.

Pedro Neto was allowed to gallop clear into the City box and picked out Leander Dendoncker to level on 11 minutes.

Parity only lasted another five minutes as De Bruyne was both creator and executioner of City’s second.

Raheem Sterling failed to connect with his pass through the heart of the Wolves defence, but Sa could only turn the ball back into De Bruyne’s path and he made no mistake.

READ | DOCTOR KHUMALO: WHY CAN’T WE BE ALLOWED TO BE PART OF SAFA?

The best was yet to come from the 30-year-old as he took aim from outside the box and arrowed a shot into the bottom corner to complete a hat-trick, with all three goals scored by his supposedly weaker left foot.

“My right is the stronger foot but I’m never afraid to shoot with my left because it creates a problem for the opposition,” said De Bruyne.

“Whenever you get the opportunity, don’t hesitate.”

De Bruyne’s was the third quickest hat-trick in Premier League history and his first since he played for Genk 11 years ago.

But there was even more to come after the break as he slotted home on his right foot after Phil Foden’s cross was deflected into his path.

More defensive injuries to Laporte and Fernandinho were the only negative of the night for City.

Yet, any deficiencies at the back are being masked by the firepower of Guardiola’s men at the moment.

Since a 2-2 draw with Liverpool left the title race still on a knife edge last month, City have scored 23 goals in five games.

Foden hit the post and Sterling missed a sitter with the goal gaping at the back post.

But Sterling could not miss another open goal when Joao Cancelo’s deflected cross fell his way six minutes from time.

De Bruyne nearly had time for a fifth of his own in the final minute as he curled off the post.

“It should’ve been five to be honest.”

However, another five-star performance was more than enough for City to give Liverpool little sign of encouragement they will cede ground down the home straight.