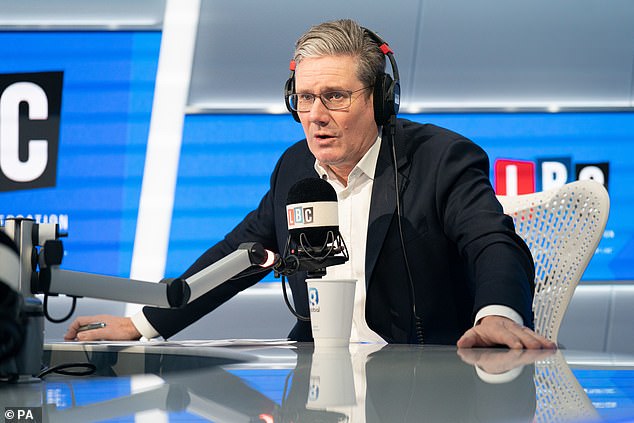 Labour refuses to support a fresh government crackdown on eco-extremist protestors, arguing that police already have sufficient authority to remove them from the streets.

A regulation suggested by ministers would put a halt to new forms of ‘guerrilla tactics’ employed by eco-activists such as Just Stop Oil, whose efforts to adhere themselves to road surfaces have been discovered by law enforcement.

The legislation, according to Mr. Sunak, will strike a better balance between the freedom to demonstrate and “the rights of the hard-working majority to go about their daily business.”

Sir Keir labeled the group – which made headlines for blocking highways for all traffic, including ambulances – as ‘wrong and deeply arrogant,’ but he stated that the issue could be resolved with the current police capabilities.

During a phone-in on LBC radio, he also defended Labour’s receipt of tens of thousands of pounds from Dale Vince, a millionaire in the green power industry who has also funded Just Stop Oil.

He stated that the contributions to his 2020 leadership campaign, which included £20,000, would not prevent him from criticizing the group.

During a phone-in on LBC radio, he also defended Labour’s receipt of tens of thousands of pounds from Dale Vince, a millionaire in the green power industry who has also funded Just Stop Oil.

The legislation, according to Mr. Sunak, will strike a better balance between the freedom to demonstrate and “the rights of the hard-working majority to go about their daily business.”

Sir Keir told LBC, ‘I am as strong as anyone in the opinion that action must be taken against Just Stop Oil — gluing yourself to the road, committing those measures, and preventing ambulances from passing – is wrong, extremely arrogant, and I urge the police to act.’

But he said that the police sought ‘clarity’ on the law: ‘If I were prime minister, I would bring the chief constables in a room, sit them down with me, and ask ‘right, what’s the issue?’

Baroness Chakrabarti, a Labour peer, warned that the “draconian” Public Order Bill might classify every nonviolent protest as “effectively terrorism.”

The former shadow attorney general and former director of the civil rights organization Liberty stated on BBC Radio 4’s Today programme, “The police already have sufficient authority to arrest and remove individuals who obstruct the highway.”

Since the last election, the 61-year-old vegan owner of Forest Green Rovers football team has given £360,000 to Labour via his Ecotricity electricity company.

This, I’m afraid, treats all peaceful protest as if it were terrorism, and this bill resembles anti-terror legislation from the past.

Because their definition will set such a low threshold, this degree of pre-emption will effectively shut down what is not even creating any interruption.

Mr. Vince explained that he contributed to the opposition “to help them win, to help them get into government so they can implement their agenda, which is my agenda, social justice and a green economy.”

Since the last election, the 61-year-old vegan owner of Forest Green Rovers has contributed $360,000 to the party through his power company, Ecotricity.

He provided Sir Keir $20,000 for his 2020 leadership campaign and $10,000 to Angela Rayner, the deputy leader. Additionally, he has contributed to the Green Party and Greenpeace.

But he is also one of Just Stop Oil’s major individual donors, telling Sky News that he donated ‘tens of thousands of pounds’ to create the organization and more in November of last year when it experienced financial difficulties.

He stated that he disagreed with their tactics on sometimes, but added, “I understand why they do what they do.” It is within their ability to do so.’

Today, Mr. Starmer stated that receiving the payment would not prevent him from criticizing Just Stop Oil.

In recent weeks, climate protestors have expanded their strategy to include slowing traffic to a crawl with walking rallies on busy city streets.

A bill suggested by ministers would give police the authority to halt “go-slow” demonstrations before they generate havoc.

Last month, Just Stop Oil activists conducted walking protests during rush hour in London, blocking three lanes on both sides of the A2 in Southwark before conducting a similar blockage in the City.

In the coming days, according to Downing Street, an amendment to the Public Order Bill will be introduced.

This will widen the legal definition of’serious disruption,’ providing the police with greater authority and clarity regarding when to interfere.

Under the proposed change, if officers determine that a slow walk could cause significant disruption, they can stop it before chaos ensues. First, they will be allowed to impose limitations on the slow stroll, such as requiring that it proceed on the sidewalk.

If protesters refuse to disperse, cops could remove them. The goal would be to respond to possible incidents within minutes rather than hours.

Police will now be able to assess the cumulative impact of a succession of protests by the same group, rather than treating them as separate events. This includes tactics aimed to cause repeated disruptions over the course of days or weeks.

The right to protest is a vital element of our democracy, but it is not absolute, as stated by Mr. Sunak. It is necessary to strike a balance between the rights of individuals and the rights of the hard-working majority to conduct their daily affairs.

Sir Mark Rowley, the commissioner of the Metropolitan Police Service, stated that he ‘welcomed’ the proposal now being debated in the House of Lords. He stated, “In practical terms, if Parliament provides such clarity, the police will have a clearer line to enforce when protests interfere with those who simply wish to conduct lawful business.”