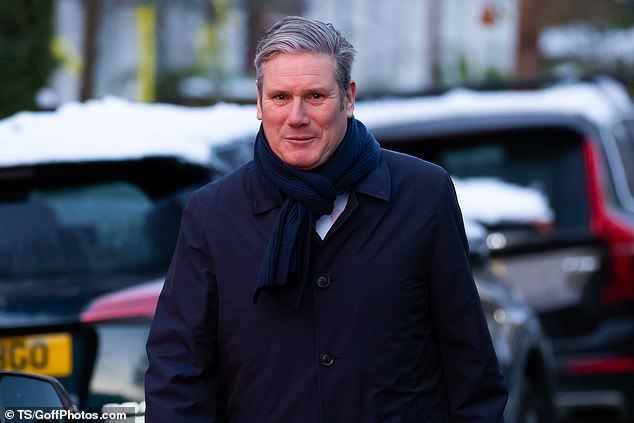 Today, Keir Starmer makes another attempt to end the Corbyn era by claiming that Labour is no longer a “tax and spend” party.

Sir Keir is delivering a landmark speech in which he rejects the concept of “big government” as he begins a crucial electoral year in which his friends recognise he must “close the deal” with voters.

There are indications that Labour’s support is’soft,’ and the public remains dubious about its leader, despite the party’s commanding lead in the polls. This week, a survey revealed that Rishi Sunak had surpassed Sir Keir as the favorite candidate for prime minister.

Sir Keir will outline his goal for “a decade of national revitalization” in his talk this morning.

However, he will concede that it cannot be accomplished by “taking out the huge government checkbook again.”

Sir Keir is anticipated to add, in remarks that could infuriate the extreme Left, “I can see the harm the Conservatives have done to our public services as clearly as anyone.” However, we will not be able to spend our way out of their situation; it is not that simple.

There is no alternative to a thriving private sector that generates wealth for every community.

There are indications that Labour’s support is’soft,’ and the public remains unimpressed about the party’s leader, despite the party’s commanding position in the polls.

This week, a survey revealed that Rishi Sunak had surpassed Sir Keir as the favorite candidate for prime minister.

Sir Keir’s performance will be contrasted closely to that of Mr. Sunak, who delivered his own New Year’s address yesterday.

The prime minister outlined five commitments for the balance of the session, including halving inflation, expanding the economy, and reducing NHS wait times.

He also drew a line of division with Labour by pledging to enact strict anti-strike measures and restrict the flow of migrants crossing the English Channel in small boats.

Sir Keir will assert that he can provide “the economy and politics that Britain deserves” and end the age of “band-aid politics.”

In 10 Downing Street, he would implement “a new method of government” that would aid in constructing a fairer, greener, more dynamic Britain.

He will remark, “I believe in our nation, in our businesses, in our people, in our spirit, and in the aspirations they have for themselves.”

This is Keir Starmer’s eighth effort to revive his political career since becoming Labour leader.

‘Weekly, he changes his stance based on what he believes to be popular; from backing free migration to supporting unions, he will say anything if the politics favor him.

He should quit providing speeches filled with cliches and instead announce a plan for the people’s priorities.

He has nothing to say about how to reduce crime, immigration, and debt – this is what the public wants to hear.

It comes after one of Sir Keir’s frontbenchers refused to back shadow health secretary Wes Streeting’s “change or die” ultimatum to the NHS.

He stated that he was unable to comprehend why the British Medical Association union was “resistant” to the notion that additional employees must result in higher quality.

And he stated, “We cannot continue putting money into a style of care from the 20th century that results in delayed diagnoses and more expensive treatment.”

When asked if she agreed with Mr. Streeting, she stated that she stood by the commitment to expand staffing levels.