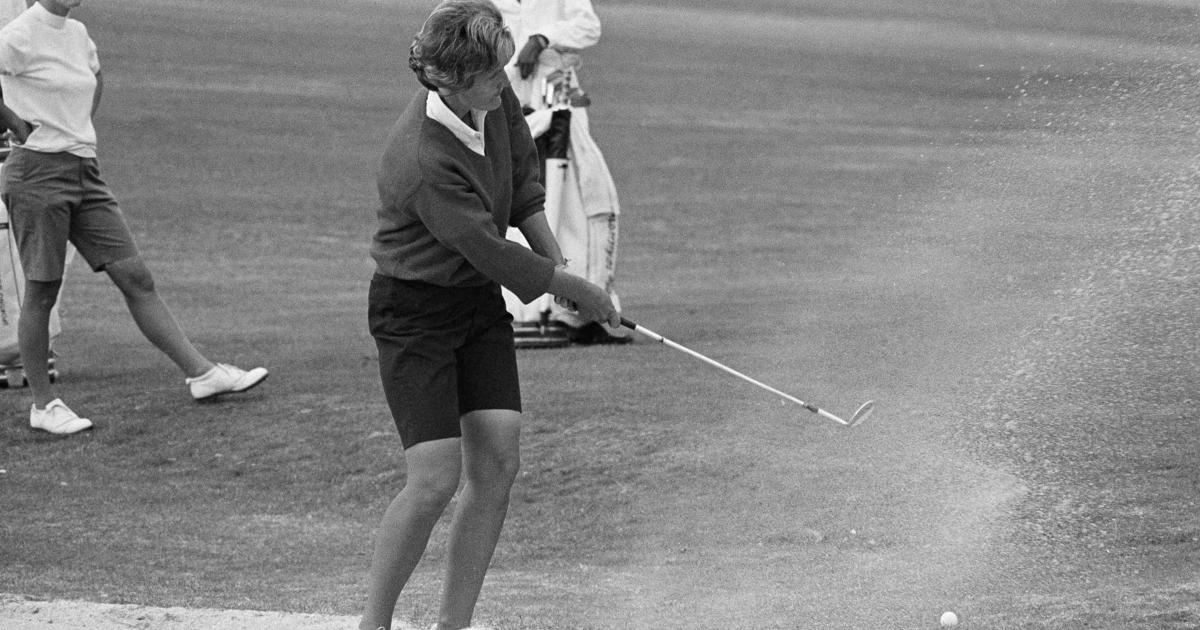 On November 25, 1966, Kathy Whitworth blasted out of a sand trap on the 18th green and then made a 6-foot putt to seize the lead in the Women Titleholders Golf Tournament at Augusta, Georgia. According to her lifelong partner, the former LPGA Tour player, whose 88 victories are the most by any golfer on a single professional tour, passed away on Christmas Eve, 2022. She was 83 years old. AP/Horace Cort

Kathy Whitworth established a standard in golf that has never been surpassed, not by Sam Snead, Tiger Woods, Mickey Wright, or Annika Sorenstam. She holds the record for most victories on a single professional tour with 88.

Whitworth, whose LPGA Tour victories lasted nearly a quarter century, and who became the first woman to earn $1 million on the LPGA, passed away on Christmas Eve, according to her lifelong partner. She was 83 years old.

Bettye Odle did not specify Whitworth’s cause of death, stating only that he died suddenly on Saturday evening while celebrating with family.

“Kathy left this world the way she lived it: loving, laughing, and creating memories,” Odle said in an LPGA Tour statement.

In July 1962, Whitworth won her first of 88 titles at the Kelly Girls Opens. When Whitworth won the Lady Michelob in the summer of 1982, she broke Mickey Wright’s record of 82 career victories by capturing six majors during her career.

Her last triumph came at the United Virginia Bank Classic in 1985.

Her career lacked only the U.S. Women’s Open, the most prestigious of the women’s majors. In 1981, when she became the first woman to earn more than $1 million in her career, she stated, “I would have traded being the first to earn a million for winning the Open, but it was a consolation that lessened the sting of losing.”

On Twitter, Sorenstam referred to her as the LPGA’s all-time leader in victories and a “complete class act” who will be sorely missed.

“Thank you, Kathy, for setting the standard so high,” she wrote.

In 1965 and 1967, Whitworth was named the AP Female Athlete of the Year, comfortably defeating Wimbledon singles champion Billie Jean King. 1982 marked Whitworth’s induction into the World Golf Hall of Fame.

Seven times in a span of eight years, she was the LPGA player of the year (1966 through 1973). Seven times she won the Vare Trophy for the lowest scoring average, and eight times she was the leading money winner.

However, she was identified by a single number, 88.

Woods has since matched Snead’s PGA Tour record of 82 victories, which was set by Snead. Wright had 82 victories on the LPGA Tour, while Sorenstam had 72 victories when she retired in 2006 at the age of 36.

Betsy Rawls once remarked to Golf Digest, “I believe Mickey had the best swing and was perhaps the greatest golfer.” But Kathy was the best player I have ever seen in a game.

Born in Monahans, a small village in West Texas, Whitworth learnt to play golf in New Mexico. She began playing golf at the age of 15 in Jal, New Mexico, on a nine-hole course constructed for El Paso Natural Gas employees.

She quickly became a two-time New Mexico State Amateur champion. After attending Odessa (Texas) College for a brief period, she turned professional at age 19 and joined the LPGA Tour in December 1958.

Whitworth once told Golf Digest, “I was really fortunate in that I knew exactly what I wanted to do.” “Golf grabbed me by the neck just now. I cannot express how much I enjoyed it. I used to believe that everyone knew what they wanted to do at age 15.”

Wright’s swing was more aesthetically beautiful. Whitworth was all about perseverance and success.

Whitworth continued to host younger clinics and have an active presence in the sport.

She once stated, “I don’t think about the legacy of 88 tournaments.” “I did it because I wanted to win, not because I wanted to set a record or an unachievable aim. I am not a remarkable anomaly. I had nothing to do with my achievement. Being a better player does not make me a better individual.

When asked how I would like to be remembered, I believe it is sufficient if people remember me at all.