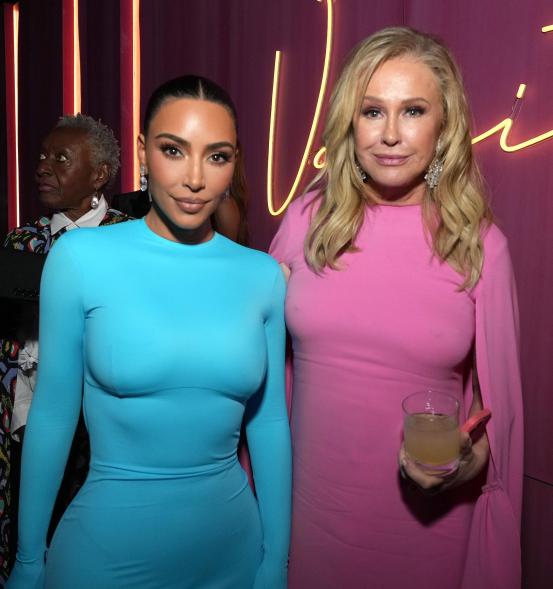 No need to rip her clothes apart.

The “Real Housewives of Beverly Hills” actress told TMZ that the criticism Kardashian received for the outfit was “crazy” and “stupid.”

Kathy stated, “Everyone should come as they please and feel comfortable.”

And when asked if she believed there was anything “wrong” with Kardashian’s attire, Kathy, 63, reiterated, “No. She is always attractive.”

The attire appeared to conflict with the Hilton family’s festive attire.

Paris chose a red minidress, while her sister Nicky donned a red and green floral ensemble that was holiday-ready.

In the meantime, Kathy resembled a Christmas present in a red and green tartan dress with a large red ribbon.

Even Kim’s mother, Kris Jenner, was more cheerful in a stylish black pantsuit with lace flowers.

Many criticized Kardashian’s wardrobe choice, describing it as “crazy,” “awful,” and “disrespectful.”

“Kim’s costume is for a rock concert, not a Christmas party,” one troll said at the time on Instagram, while another questioned, “Did Kim not comprehend the holiday party attire assignment?”

“Everyone is dressed nicely, but Kim looks like a 15-year-old forced to attend her parents’ party,” remarked a third commenter, while a fourth wondered, “What is Kim wearing?!”

However, 41-year-old Paris appeared unfazed by her friend’s fashion sense as she proudly posted a photo with Kardashian from the party on Instagram.

“My mother always hosts the most legendary parties. This weekend, I enjoyed enjoying the holidays with family and friends. What are some of your favorite holiday traditions? #Slivmas,” Paris wrote in the photo’s caption last week.

In her defense, the “Kardashians” star wore the same costume to Mason Disick’s Bar Mitzvah party earlier the same evening, despite the fact that some viewed it as equally improper for that event.

On Christmas Eve, the mother of four appeared significantly more festive at her own family’s holiday gathering. Kardashian chose a sparkling silver gown for the occasion.