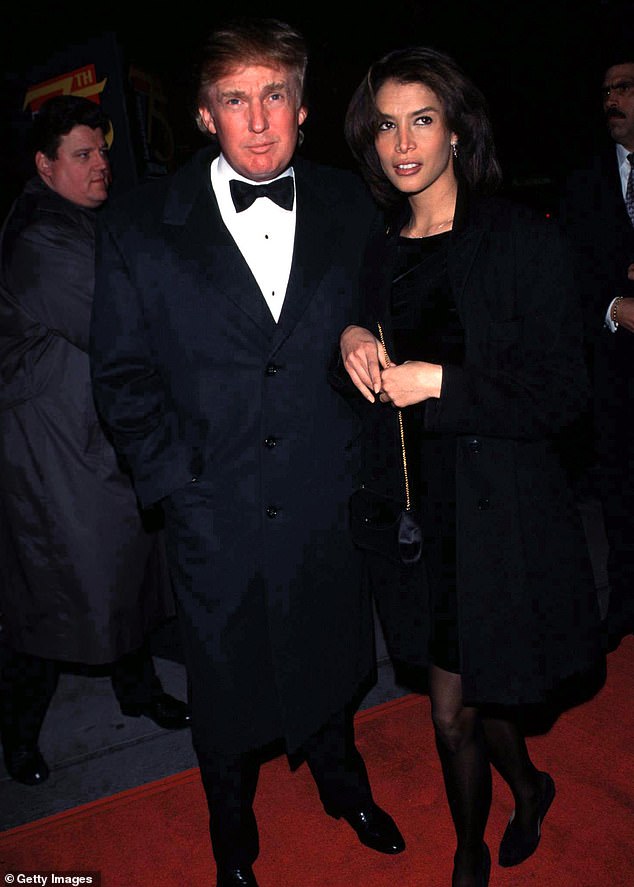 The biracial supermodel Kara Young, who dated former President Donald Trump in the late 1990s, corroborated a report that the former commander in chief said she received her intellect from her family’s “white side.”

Young, 47, talked to Deborah Norville of Inside Edition for the first time since Trump was elected president in 2016 and for what she believes will be the final time.

She corroborated a claim made in Maggie Haberman’s book Confidence Man, according to which Trump jokingly claimed that his biracial model ex-girlfriend inherited her ‘brain’ from her white father and her ‘beauty’ from her black mother.

Young admitted to saying it to Norville but said, “It sounds – when someone says something in jest – are they kidding? I’m not sure.

The model continues by saying that while they “didn’t fight or anything like that,” she did warn Trump, “It’s not funny.”

Following his divorce from Marla Maples in 1997, Trump asked Young out.

I didn’t believe I was going to like him since he wasn’t my type, the woman said. Although I didn’t believe he was my type, it still happens. He’s quite hilarious, and he had a very wonderful personality, although I know it’s hard to believe.

They finally split up, but Young insists there is no animosity and that the romance “run its course.”

She noted that it became aggravating to be called about Trump and be unable to say anything, so she ultimately talked to Norville, who presents Young as a friend.

Young claims that it has been six years since she last talked with Trump, when she phoned to congratulate him on defeating Hillary Clinton in the 2016 presidential election.

Although it has been rumored that Trump would run for president once again in 2024, the supermodel said that he shouldn’t.

Inside Edition was informed by her that this interview would be the first and final time she ever spoke about him in public.

The latest narrative is from the book Confidence Man, written by Maggie Haberman of the New York Times, which came out on Tuesday. Rolling Stone broke the story first.

Young backed Trump in 2017 when he was accused of being racist.

She told the Times, “I never heard him express a harsh statement about any ethnicity of people.”

When asked whether he shared white nationalist beliefs, she responded: “That was not my experience.”

Prior to his marriage to first lady Melania Trump, the president, who has been married three times, was infamous for courting models.

Young described another instance in which Trump expressed astonishment that Serena and Venus Williams brought a racially diverse audience to the U.S. Open because he had assumed black people were disinterested in tennis in a 2017 interview.

Trump hosted a reception at the White House in January 2017 to meet with congressional leaders, according to another incident described in Haberman’s book.

The previous president once mistook a group of ethnically diverse staff members for the wait staff and requested them to bring out the hors d’oeuvres.

Trump questioned the wait staff, “Why don’t you get the food?”

Reince Preibus, who was then the White House chief of staff, quickly corrected Trump’s error by informing him he had just spoken to senior congressional officials and pointing to the genuine wait staff.

Former national security advisor John Bolton made the intriguing insight that Trump once told him he preferred to terminate any relationships with women rather than being rejected, which then-chief of staff John Kelly considered to be telling.

Trump said to Bolton that he never liked it when the women he dated ended their relationships with him; he always preferred to initiate the breakup. (When I told Kelly later, he remarked it was “quite illuminating,” according to Bolton’s account)

»Kara Young speaks on Trump’s comment about her brain«