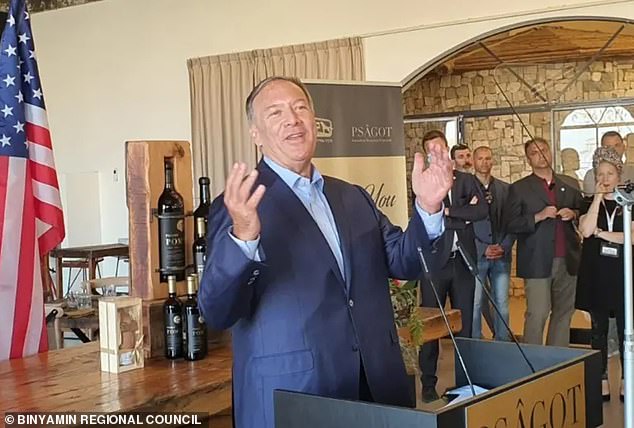 Vice President Kamala Harris and Second Gentleman Doug Emhoff appear to have served wine produced in Israel’s West Bank settlements for their Passover seder — despite the Biden administration’s opposition to the annexed territory.

It was the first known time the Jewish holiday dinner was hosted at the Vice President’s residence.

Emhoff posted a photo of the couple and their aides gathered around a traditionally-set table late on Friday night, writing on Twitter: ‘Tonight, @VP and I were honored to celebrate Passover with our hardworking staff by holding a Seder at the Vice President’s Residence.’

‘Whether you’re celebrating with your family, your work family, or the family you have chosen, we wish you all a Happy Passover!’

But of two bottles of wine on the table, the label on one appears to be similar to that of Psagot Winery’s Malbec red wine.

Psagot Winery is located just outside of the West Bank settlement of Psagot, and was the site of a controversial visit from then-Secretary of State Mike Pompeo in November 2020.

It even has a wine named after him in a show of appreciation.

Such settlements in the West Bank, however, are viewed as illegal under international law.

DailyMail.com reached out to the vice president’s office to ask for confirmation and was referred to a Saturday night statement by Harris spokesperson Herbie Ziskend.

‘The wine served at the Seder was in no way intended to be an expression of policy,’ Ziskend wrote.

If the wine came from Psagot, as the label appears, Harris and Emhoff’s choice would be a departure from President Joe Biden’s staunch opposition to Israeli settlements.

The State Department sharply rebuked an announcement from Tel Aviv late last year about a further expansion into the West Bank — territory that Palestinians want to retain for a future state.

‘We strongly oppose the expansion of settlements, which is completely inconsistent with efforts to lower tensions and to ensure calm, and it damages the prospects for a two-state solution,’ State Department spokesman Ned Price told reporters in October.

It’s a departure from the Trump administration’s embrace of its ties with Israel, to the outrage of Palestinians and the greater international community that feared the US strongly backing Israel could destabilize the fragile peace in the region and jeopardize hope of a two-state solution.

During his time in office Donald Trump officially recognized Israel’s capital as Jerusalem, and Pompeo’s visit to Psagot as well as Golan Heights was widely seen as legitimizing Israel’s claim to the West Bank.

Pompeo contradicted years of US policy when he claimed those settlements did not run afoul of international law.

The winery is not far from the settlement community of Psagot. Such settlements in the West Bank are considered illegal under international law, something Israel disputes

The former Trump official criticized a 2019 ruling by the European Court of Justice that ordered products from Psagot Winery and other goods made in illegal Israeli settlements to have their origin labeled.

The court decided the products could no longer be said to have been ‘made in Israel’ and consumers deserved to make ‘informed choices’ when shopping.

In return for the statement, Psagot Winery named a red variety after Pompeo that it still sells on the company site.

‘The [Trump] administration’s message is extremely important and strengthens our ongoing fight against the boycott and hypocrisy campaign that the European Court of Justice has given,’ Psagot CEO Yaakov Berg said in a 2019 statement.

‘The support the winery has received in the United States and the many efforts the winery put into this matter has contributed to the publication of this message. We will continue this just and moral struggle.’

Pompeo even went back for a visit as recently as October 2021, the Jerusalem Post reports.

The winery has a bottle named after Trump Secretary of State Mike Pompeo over his condemnation of a European Court of Justice ruling that required goods produced in the West Bank to be marked as such. He spoke there as recently as October 2021 (pictured)

He said during the trip that Israel had the right to build on the territory Psagot Winery sat on and said Israel was ‘not an apartheid state.’

Hours before Harris appears to have had the controversial wine at her dinner table, Biden released his own statement marking Passover and using it to extend thoughts to the Ukrainians currently grappling with a brutal Russian invasion.

‘Together again, we will commemorate the Exodus of the enslaved Israelites from Egypt. And we will retell a timeless story about that most human quest for freedom. Redemption. Faith. Hope. And, ultimately, deliverance,’ Biden said.

‘A story that has brought solace and a sense of promise to Jewish communities throughout their history as they endured acts of persecution, pogroms, and even genocide.’

He later went on, ‘This Passover, we hold in our hearts the people of Ukraine and those around the world whose heroic stand against tyranny inspires us all.

‘The enduring spirit of this holiday continues to teach us that with faith, the driest desert can be crossed, the mightiest sea can be split, and hope never stops marching towards the promised land.’