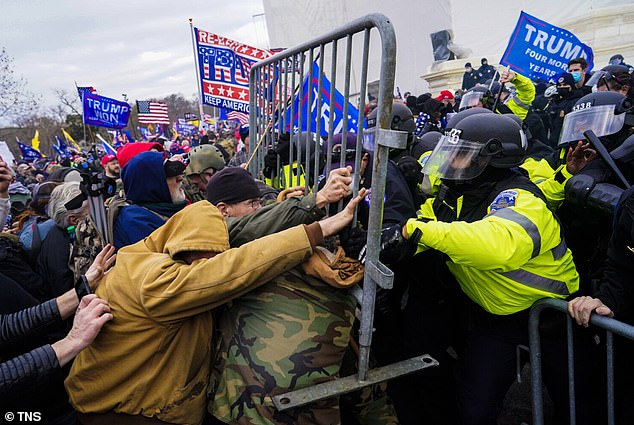 With just a few weeks before the November midterm elections, the Justice Department is seeking Congress for an additional $34 million in order to carry out its investigation into the January 6th Capitol siege.

The financing measure would most likely be presented to the House in December, but it is doubtful that such a spending request would be approved should Republicans win power in the coming weeks.

Numerous rioters who rushed the building in favor of then-President Donald Trump are the focus of a vast criminal investigation investigating individuals who took part in the unrest. There have been 870 arrests thus far.

Regarding the DOJ’s request for the additional funds, House Appropriations Chair Rosa DeLauro, D-Connecticut, told NBC News that “there are many of requests.”

“We’re looking at all of them to see what advances and what doesn’t advance.”

The investigation into the events of January 6, 2021 has been dubbed “the most comprehensive” in the Justice Department’s history.

In a letter to Congress, the Department explained how more than $34 million in financing is “critically required” to support the inquiry.

The Justice Department stated to the legislative branch, “The cases are unprecedented in scope and are anticipated to be among the most complicated investigations pursued by the Department of Justice.”

The U.S. Attorney’s Offices around the nation would “need to endure a budget decrease” in order to support these cases, should the additional money not be able to be obtained.

The concern then is that offices wouldn’t be able to handle other crucial cases in their regions.

The cash would be included in the fiscal year 2023 budget, which Congress intends to approve in December, at the same time that the committee will release its final report on January 6.

There is still work to be done, but the U.S. Attorney’s Office for the District of Columbia has spearheaded efforts with aid from 93 federal prosecutors offices around the nation who have donated people.

Online detectives have also been able to pin down hundreds more rioters who were present at the Capitol that day but were not detained.

The number of cases in the Department’s in-tray is gradually decreasing as more people are convicted than are arrested.

Each week since the beginning of the year, around four individuals have been detained in connection with the disturbances.

The deadline for Congress to attempt to reach a financial deal is now December 16.

The first money request was included in a plan that passed the Democratic-led House Appropriations Committee last summer, but passing a bipartisan bill that can be approved by both houses may be more challenging.

The plan needs at least 10 Republican votes to pass the House, and its chances of passing are significantly reduced if Republicans seize control of the House and elect Trump supporter Rep. Kevin McCarthy as Speaker.

Rep. Jim Jordan of Ohio, an avowed supporter of Donald Trump who has publicly blasted the January 6 committee and peddled claims the election was rigged, is a probable candidate to lead the Judiciary Committee, which oversees the Justice Department.

However, even if U.S. Attorneys’ offices take on the charges and a resulting budget impact, Attorney General Merrick Garland and Deputy Attorney General Lisa maintain the prosecutions of individuals who were engaged on January 6 would go.

Garland said in July, “Of course, we’d prefer additional resources, and if Congress wants to provide them to us, that would be very good.” But prosecutors and agents are working on this case from all around the nation, and I have complete faith in their competence, professionalism, and commitment to the job.