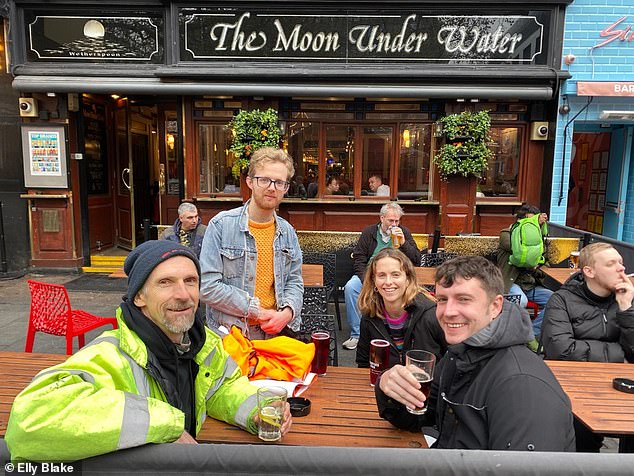 Officers were compelled to follow the Just Stop Oil protestors across London as they stopped for a picnic and then proceeded on a pub crawl.

Four of the protestors stated that the Metropolitan Police Department appeared “very foolish” after over 80 officers policed the demonstration and were stationed throughout the capital, ready to intervene if the disruption became “severe.”

A slow-march through the Strand, however, did not reach the level of illegality, and after it ended, police stayed to observe the group as they went out for drinks to celebrate a birthday.

Just Stop Oil protester Matt Langsford told MailOnline from a Wetherspoon bar in Leicester Square, “The demonstration is over and the police are following us, which is unfair and unjustified.”

They have followed us from pub to pub, so what is the point?

They could go fight crime instead of standing around and watching us drink.

They have appeared quite foolish.

They’ve rushed around and followed us to a bar, so it’s evident they’re playing games. The second time that day.

Rachel Bolser, age 27, added, “They followed us as we marched from one pub to another.” I believe they look ridiculous.

They grabbed around six or seven vans, followed us while we were in the park and the pub, and then followed us as we entered another pub.

Shaun Irish, age 25, stated, “We have just arrived at the pub for someone’s birthday, and there are two officers directly in front of the establishment.”

There were vehicles with flashing lights stopped in a bus lane, two vans with perhaps ten officers observing four of us.

“We were literally four at a pub,” he added.

“We do not require a police state to monitor people on their birthdays. We must address the climate crisis.

Today, Just Stop Oil made no secret of their intention to disrupt traffic, posting online about their intentions and their opinion that their new slow-walk approach rendered them “unarrestable.”

Then, at 7 a.m. this morning, the Deputy Assistant Commissioner of the Metropolitan Police, Matt Twist, briefed reporters on how they planned to take them on, stating that they had a “established, well-resourced team” that was “ready to respond quickly.”

When a handful of protestors arrived at Shepherd’s Bush station at 8 a.m. today to begin a promised two-week campaign of chaos, they were permitted to march slowly down the center of the road.

Two individuals were arrested for obstructing the highway, but the majority of the group took the Tube to Temple, where they began another slow march through the streets.

Billy Bowen-Long, chief inspector for public order planning, acknowledged that the protest was legal, so they could not intervene.

In central London, twelve activists flanked by nine officers and followed by at least five police vans were able to walk through the Strand to High Holborn and freely access a number of locations.

It was something of a PR own goal for the Metropolitan Police Department, which had invited journalists to observe their operations.

In contrast to previous protests in which environmental activists sat in front of cars on busy roads to stop traffic, the planned action will allow traffic to move very slowly behind each march.

This new method of protesting, according to the group, will be “non-injunction-breaking and will aim to be non-arrestable.”

Chief Inspector Billy Bowen-Long told MailOnline: ‘We have to work within the confines of the law, and the law is very clear: protest is legal in this country, and we only have the authority to intervene when it crosses a threshold and becomes unreasonable or unlawful.

This is the fundamental issue. The use of the highway for protest is legal, and before we intervene, we must meet the criterion of demonstrating that it has become unreasonable.

If individuals fail to appear on many times, they will be charged and brought before the court, which will decide their fate.

The new strategy, it is hoped, will place police in a “dilemma” regarding whether to allow a “legal protest march” or to threaten to arrest protestors, who would nonetheless enable vehicles to continue their journeys.

Commander Karen Findlay, head of the Metropolitan Police, stated that the force is “well prepared” for the anticipated disruption.

Sources told the Mail on Sunday that Rishi Sunak has become more frustrated in government meetings at the “disruption of the daily lives of law-abiding residents.”

According to reports, Mr. Sunak has instructed Home Secretary Suella Braverman to convene a conference with police commanders at Downing Street in order to “define the Government’s expectations that the police must properly implement the law.”

Since March, 62 persons have been accused in relation to the M25 protests, of which 29 were remanded in custody.

Over 11,000 shifts of Metropolitan Police officers have been devoted to anti-JSO activities.

JSO conducted a sustained campaign consisting of daily actions last month, which it claimed as the “largest civil disobedience campaign ever.”