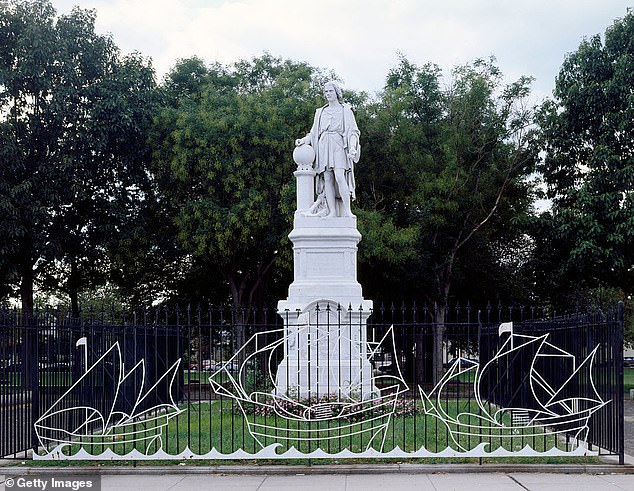 Philadelphia has replaced a plywood box covering a statue of Christopher Columbus after a court rejected the previous mayor’s request to have the monument removed during 2020 demonstrations over racial inequality.

On Sunday evening, camera teams saw the box being taken out of the Marconi Plaza monument. The box was decorated with the Italian flag’s tricolor of green, white, and red.

The hoarding broke away, and Columbus’ marble figure sprang abruptly from the top of the container.

Judge Mary Hannah Leavitt said in last week’s decision ordering the monument to be removed that the city may put its own plaque with the message it prefers to transmit if it disagrees with the’message’ the statue delivers.

The result saddened authorities, but the city would accept the judge’s decision, according to Kevin Lessard, spokesperson for Democratic Mayor Jim Kenney.

Some readers protest that Kenney has more important issues to deal with than the placement of a monument since his city is dealing with alarmingly high rates of violent crime.

Lessard said in an email, “We will also keep looking at our alternatives for a course of action that enables Philadelphians to celebrate their history and culture while honoring the situations and histories of everyone’s various origins.”

The city and the Friends of Marconi Plaza, where the monument is located, have been engaged in a protracted argument over the statue.

According to the 16-page judgement from the state’s Commonwealth Court, it was donated to the city in 1876 by the Italian-American community to honor the nation’s centennial.

Supporters claim that Columbus is a symbol of the city’s rich Italian history.

According to Kenney, Columbus was revered for centuries as an explorer but also had a “far more notorious” past that included enslaving Native Americans and exacting harsh penalties including amputation of limbs or even death.

In June 2020, as demonstrations against racial inequality got underway, part of them concentrated on the monument. Kenney then issued an order to have it taken down, citing concerns about public safety.

A court overturned the city’s decision last year, stating that the city had failed to provide proof that the statue’s removal was essential for the general public’s safety.

At the request of the district’s municipal council representative, the box that houses the statue has been painted with bands of green, white, and red that mimic the colors of the Italian flag.

While Kenny has placed a high priority on social peace, crime has increased in the City of Brotherly Love over the last several years, with a 22.9 percent increase in overall crime from the previous year.

Even if the murder rate has decreased 9.9 percent since 2021, violent crime as a whole is up roughly three percent year to date. The overall trend over the previous several years has been a strong ascent.

14,264 violent criminal acts have been registered in total to the Philadelphia Police in 2022.

The mayor of Philadelphia approved an order last month prohibiting people from carrying weapons in public areas like parks and schools after Philadelphia police complained to him earlier this year that they “can’t keep up” with the city’s fast climbing murder rate.

Philadelphia’s lawlessness situation has become so bad that progressive District Attorney Larry Krasner is presently being tried for impeachment.

State lawmakers decided to remove Krasner from office earlier this month due to his progressive policies, which they claim are to blame for the sharp increase in crime in Philadelphia.

»Judge removes box from Columbus monument after finding against mayor«