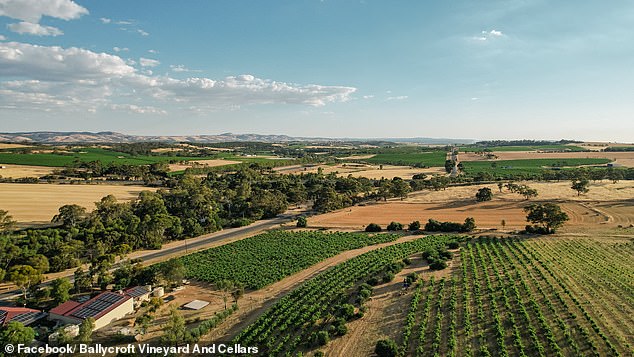 Joseph Evans, owner of a vineyard, no longer complains about his electric cost.

The entrepreneur of Ballycroft Vineyard in South Australia’s Barossa Valley is the first person in the nation to use solar energy stored in his electric car to run his business.

And so far, the energy captured by his Nissan Leaf during the test has yielded a bountiful crop.

In the next weeks, the companies behind the innovative experiment will welcome additional electric vehicle owners to utilize the technology, a move that, according to industry experts, might result in lower power costs and strengthen Australia’s electricity system.

The Ballycroft Vineyard in South Australia’s Barossa Valley is powered by solar energy generated by an electric Nissan Leaf automobile.

Mr. Evans, an enthusiastic owner of a Nissan Leaf electric vehicle, enrolled in a trial conducted by the South Australian Power Network.

Even after the installation of solar panels, he reported that the winery’s electrical expenditures were still $2,000 per year.

Mr. Evans said, however, that by employing an electric car to store solar energy and power his business overnight, he was now earning money rather than spending it on electricity.

He stated, “It is the holy grail of EV ownership.”

By returning a small amount of power to the grid, we earn approximately $3,000 annually.

We are entirely self-sufficient due to the fact that our solar panels run the pumps for the vineyard and the rainfall pumps for the house.

Mr. Evans stated that he delivered wine using his Nissan Leaf throughout the day, returned to charge its battery using solar panels around midday, and used it to power the vineyard overnight.

Mr. Evans and his wife (shown) have been the proprietors of the Ballycroft Vineyard for over 25 years.

A wall-mounted charger from the Victorian business JET Charge handled the flow of electricity into and out of the vehicle, and the company will begin accepting orders for the Wallbox Quasar hardware from South Australian residents by the end of January.

Tim Washington, founder of JET Charge, stated that the winery project was a fun way to demonstrate how vehicle-to-grid technology worked, but that when the technology becomes generally available, it might help many people reduce their electric bills.

‘It’s cool that it’s a winery, but it’s actually an example of how bi-directional charging will become so commonplace that we won’t need to consider it a project,’ he explained.

You will plug your EV into the power source, and that’s about it. As a result of the low barrier to entry once all technical issues are resolved, the rate of adoption will be faster than anticipated.

The winery experiment demonstrates how vehicle-to-grid technology functions, and it may soon be widely available to assist families reduce their electricity costs.

In Australia, however, only the Nissan Leaf and the Mitsubishi plug-in hybrid support the technology at present.

Ben Warren, national manager of electrification for Nissan, stated that more automakers should promote the technology because vehicle batteries are designed to withstand “extreme” demands, whereas powering houses does not require the same “swings.”

“The benefit for the customer is a lower energy cost,” Mr. Warren explained.

‘For the grid, this is also a significant benefit.

‘All of a sudden, our cars have transformed from something that sits idle in our driveways to an integral part of our lives.’

»Joseph Evans, proprietor of a South Australian winery, powers his winery with his electric vehicle«