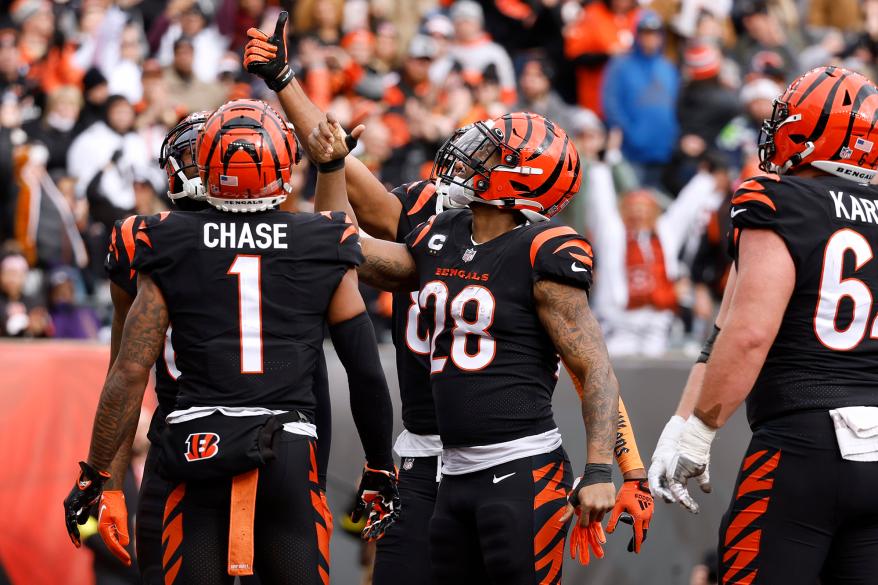 The displeasure of Joe Mixon was transformed into a touchdown celebration.

The Bengals running back voiced his displeasure on Thursday with the way the NFL changed its playoff rules to account for the Bengals-Bills game being postponed following Damar Hamlin’s on-field cardiac arrest. Due to the modifications, if the Bengals lost to the Ravens on Sunday, the league would toss a coin to decide which team would get home-field advantage in their rematch.

As a result, Mixon was prepared with his prop on Sunday when he scored from 1 yard out. He removed his gloves, where he had a coin concealed, and flipped it to simulate a playoff scenario as he entered the end zone.

The Bengals now had a 10-0 lead, and if they could hold it, there wouldn’t even be a need for a coin toss. At the break, Cincinnati had a 24-7 advantage.

Running back Joe Mixon (28) of the Bengals flips a coin on January 8, 2023, to commemorate his score against the Ravens.

Running back Joe Mixon (28) of the Bengals celebrates with teammates after scoring a touchdown against the Ravens on January 8, 2023.

According to NFL regulations, if a game is postponed, playoff placement is decided by final winning percentage. The Bengals would still be the stronger seed entering the playoffs and would therefore host Baltimore even if they lost to the Ravens on Sunday because of their superior record of 11-5 to the Ravens’ 11-6.

Mixon tweeted, “So we not following the rules no more,” in response to reports that the NFL changed its playoff method to account for the historically unusual Bills-Bengals circumstance.