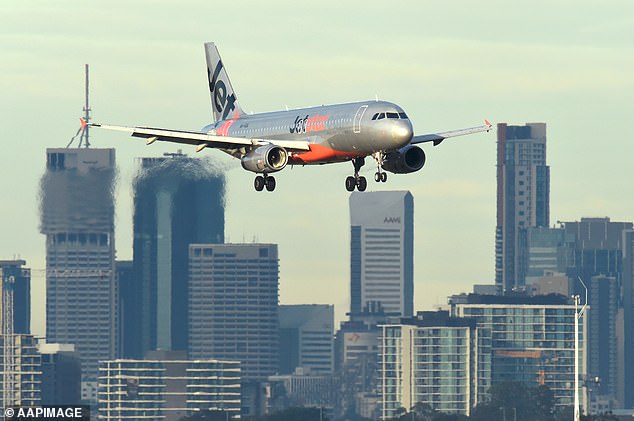 According to local media, a Jetstar airplane was forced to make an emergency landing in central Japan after receiving a bomb threat.

NHK stated that the aircraft was traveling from Narita airport near Tokyo to Fukuoka on Saturday when it was forced to detour to Aichi prefecture.

There were no reports of injuries, but social media footage appeared to show people exiting the aircraft using emergency slides and strolling across the tarmac.

A jet carrying 149 passengers was forced to make an emergency landing in central Japan on Saturday after receiving a bomb threat.

Saturday, the airplane reportedly traveled from Narita airport near Tokyo to Fukuoka

The broadcaster reported that 149 travelers had made flight arrangements.

NHK said that the threat had been reported to the police and that the emergency landing forced Chubu Airport to briefly prohibit takeoffs and landings.

After a potential security incident, a Jetstar Japan flight from Tokyo (Narita) to Fukuoka was diverted to Chubu Airport and landed normally at 7:41am local time this morning.

Passengers disembarked by emergency slides out of an abundance of caution. We recognize that this would have been upsetting for travellers and appreciate their cooperation.

Our teams are assisting them and attempting to get them moving as soon as possible. Jetstar Japan is also collaborating closely with Chubu Airport and local authorities to examine the incident.