Skip to content
Go Home «» News «» Breaking News «» Jets vs. Bears: Preview, predictions, and things to keep an eye out for 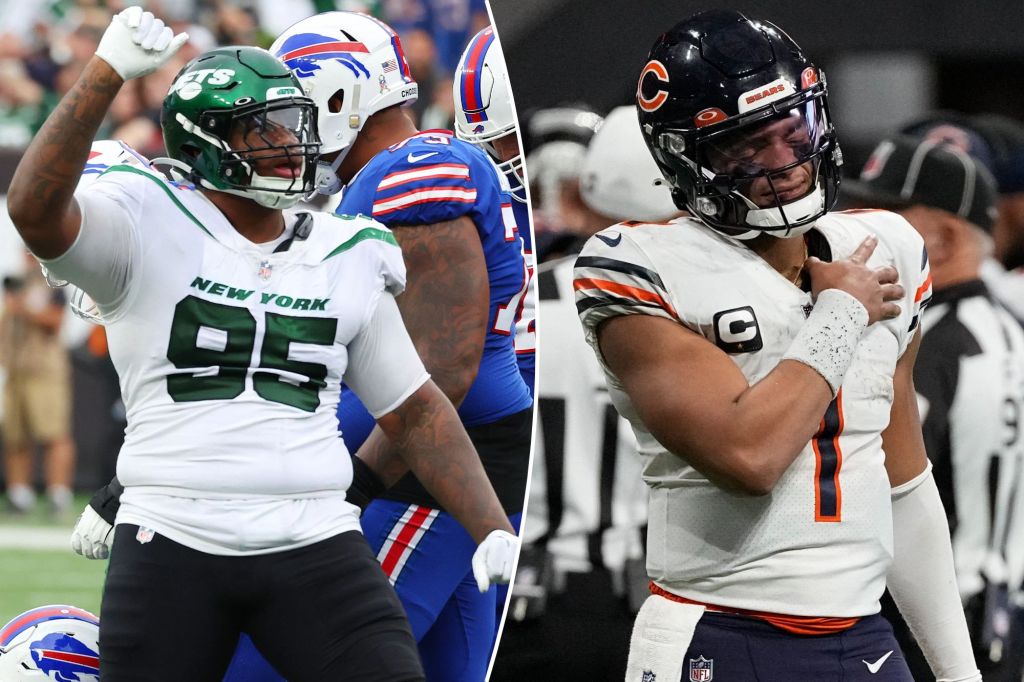 An inside look at Sunday’s Week 12 clash between the Jets and Bears at MetLife Stadium.

When the schedule was released, it appeared that this matchup would be between quarterbacks Justin Fields and Zach Wilson, two 2021 first-round picks. Instead it looks like Mike White facing Trevor Siemian. Due to an injury to his left shoulder, Fields is categorized as doubtful on Sunday. If he’s unable to play, Siemian will start.

Jets head coach Robert Saleh remarked, “We’re ready for [Fields].” “If he plays, we’re going to hit him. If he does not participate, we will try our utmost to defeat the next opponent.”

Bears quarterbacks have been sacked 40 times this season, tied for most in the NFL with Colts quarterbacks. Fields’ running ability makes it difficult to prepare for this QB uncertainty. The Jets need two distinct game plans, one for Fields and the other for Siemian, who played for the Jets in 2019.

It should not matter who the Jets’ quarterback is. The Bears may miss Justin Fields and his running abilities after trading away two of their finest defensive players. This is a momentous day for Mike White and the Jets.

Due to the spotlight on quarterback Zach Wilson’s shortcomings in New England last week, little attention was paid to the Jets’ ineffective running game. Only 26 of the Jets’ 59 running yards came from Wilson’s scrambles. When the offensive has been effective this season, the run game has been the starting point.

Connor McGovern, the center, stated that for the offensive line and the way the system is run, this is the most vital factor. This has been on the minds of every offensive lineman. We eagerly anticipate doing all possible to get back on track.”

This week may be ideal for the Jets to restore their running game. The Bears rank 29th in the NFL in run defense.

Regarding the run game, “you always want to establish it,” Jets head coach Robert Saleh explained. “It’s a state of mind. It’s not a lack of talent; rather, it’s a lack of consistency to be able to go in down-in, down-out, keep away from negative yards, and attempt to press ahead, knowing that 2- and 3-yard runs are sufficient to produce third-and-manageable situations. It encompasses everything.”

“I handled it first thing Monday morning,” defensive coordinator Jeff Ulbrich stated. “The first thing I address every day after practice is our ball output, because that’s where we have the greatest ability to affect the outcome of a game.”

Comeback This week, one of the Jets’ top receivers will return to the lineup, according Corey. After missing the last three games due to a knee strain suffered in Denver, Corey Davis will return. Davis has 19 receptions for 351 yards and two touchdowns this season, which are not very impressive figures, but he provides the club with a veteran who can help the offense get going.

Saleh stated, “It’s enormous, and sometimes you don’t feel it till they return.” “Just the professionalism, attention to detail, walk-through, and thoughtfulness with which he approaches each rep. So much respect for Corey and his professionalism.”

Due to the uncertainty surrounding quarterback Justin Fields’ availability, the Bears’ offense remains a bit of a mystery. Fields is the team leader in running yards with 843. Khalil Herbert, their top rusher, is on injured reserve with a hip injury. This leaves Chicago to rely on David Montgomery. The Bears will attempt to run the ball regardless of who is at quarterback. Montgomery has 501 yards rushing this season and can be difficult to stop. Last week, the Jets’ defense struggled to make tackles against the Patriots and will need to improve this week against the Bears.

»Jets vs. Bears: Preview, predictions, and things to keep an eye out for«