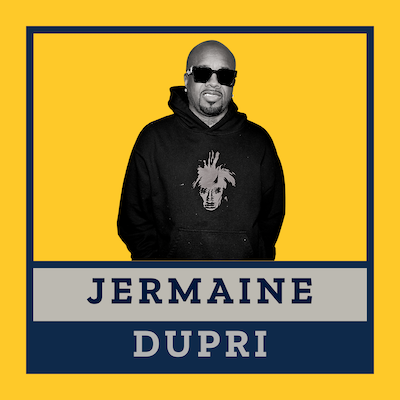 As his father was a record executive, Jermaine Dupri was exposed to hip-hop at a young age, attending concerts. However, he began his own career as a 12-year-old dancer with Whodini, the band responsible for “Freaks Come Out at Night.”

On this week’s episode of “Renaissance Man,” the hitmaker said, “I was just thinking I was going to open up for a show coming to Atlanta.” “I had no idea what I was getting myself into. Eventually, I simply stumbled into hip-hop… I had the opportunity to live in this world in 1984, 1985, and 1986 while on tour. Run-DMC, the Fat Boys, Kurtis Blow, and the rest of these individuals. I was just 12 years old. So that was quite remarkable.”

Once inside the confines, he assimilated everything, comparing himself to the robot in the absurd 1986 film “Short Circuit” who could read volumes of books in a matter of seconds.

“I would say that I resembled Johnny 5 the robot, if anyone knows what that is. He is simply reading books and absorbing all of this information. That’s essentially how I looked… I was frantically searching for this information in as many locations as possible. And, as you may know, [the late Run-DMC DJ] Jam Master Jay taught me how to DJ… I was present the very first night Def Jam debuted LL Cool J.”

With hip-hop hitting 50 years old this year, Atlanta’s importance in the art form and culture cannot be disputed. When Jermaine was growing up, the city was not the musical epicenter it is today. Certainly, we can credit individuals like LA Reid and Babyface. But Jermaine was there early, shaping the sound of Atlanta as an adolescent producer.

Early 1990s preteen rap prodigy Kris Kross was discovered by him, and he wrote and produced their megahits “Jump” and “Warm It Up.” This rendered him impossible to ignore and prompted him to establish his own label.

“Xscape was the first group I signed. People thought I was insane because I had an R&B group that I wanted to release before a rap group, based on their experience with Kris Kross. And I realized at that time that I wanted people to know I was more adaptable.”

The objective has been attained. He went on to collaborate with, among others, Usher, Mariah Carey, Janet Jackson, Jay-Z, Monica, and Nas. Welcome to Atlanta” was released in 2002 and featured Ludacris. Not only did he add another prize to his rap career shelf, but he also emphasized Atlanta’s position as the epicenter of Southern hip-hop.

“I’ve been vegan for 19 years, and I came out to tell her how she has inspired me by growing her business from a food truck to a $100 million enterprise. And she continued, “Jermaine, I have something to tell you.” One evening, you invited me to your studio. We had concluded operations, and everyone was exhausted. And you called me, saying, “Pinky, I need you in the studio. Snoop is here.”‘” She rallied her employees and supplied the studio with food.

And in keeping with the concept of his hometown, he stated that a special episode of “Verzuz” will include Diddy, the head of Bad Boy Entertainment.

And to enter the music competition with such a great collection of songs, I had to inquire about his top five. He did not hesitate to respond. “Money Ain’t a Thing” with Jay-Z, “You Make Me Wanna” by Usher, his magnum opus “Welcome to Atlanta,” and two songs by Mariah Carey, “Always Be My Baby” and “We Belong Together.”

Regarding Jermaine, however, one should never say never.

Jalen Rose, a native of Detroit, was a member of the University of Michigan’s Fab Five, who shook up college basketball in the early 1990s. He played in the NBA for thirteen years before becoming a media figure. Rose is an analyst on “NBA Countdown” and “Get Up” as well as a co-host on “Jalen & Jacoby.” He executive-produced “The Fab Five” for ESPN’s “30 for 30” series, authored the best-selling book “Got to Give the People What They Want,” is a fashion tastemaker, and co-founded a public charter school in his hometown, the Jalen Rose Leadership Academy.